That night in the Desert Camp, I did not sleep well, as it was warm inside the tent. Berber tents like the one we were in, are made of heavy wool blankets, with little to no ventilation, so it was warm. Early in the morning, the staff came by to wake people up to take them to view the sunrise over the dunes, but we declined as we wanted more sleep.

We got up at about 8AM, freshened up, and had traditional Moroccan breakfast 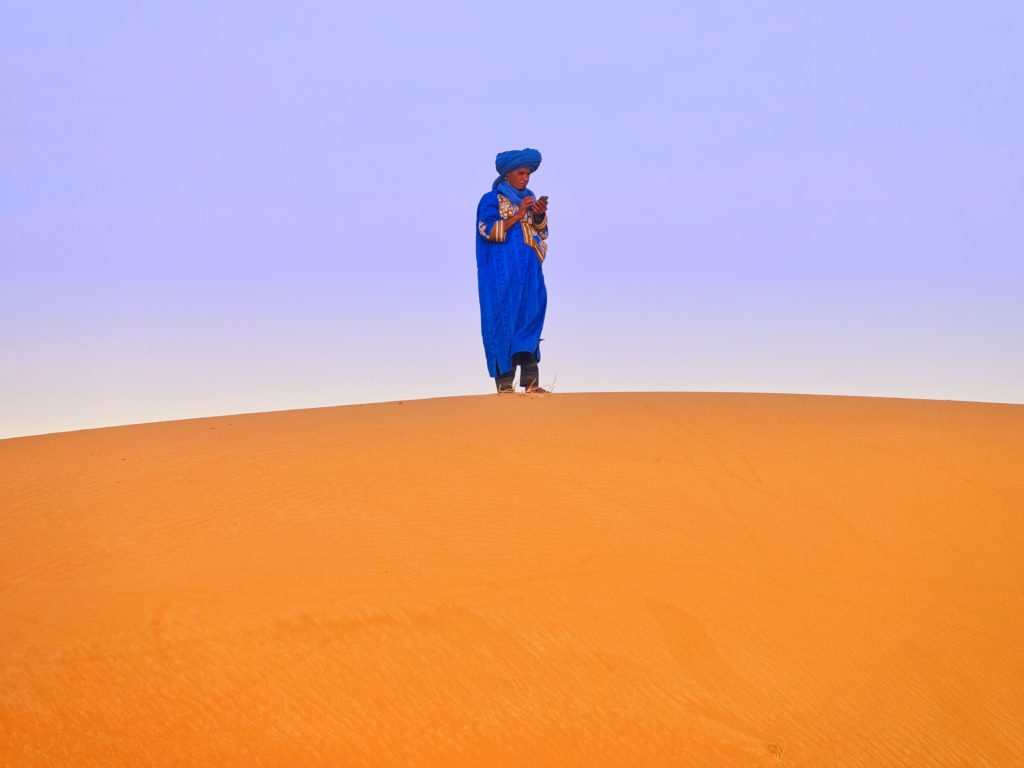 Trying to get connected on top of a sand dune, early morning

After breakfast, we took a short camel ride over the sand dunes. The camels were a lot smaller than the camels we had ridden on in Cairo, many years ago, and so the ride was quite comfortable; much more so that I recollect the ride in Cairo. 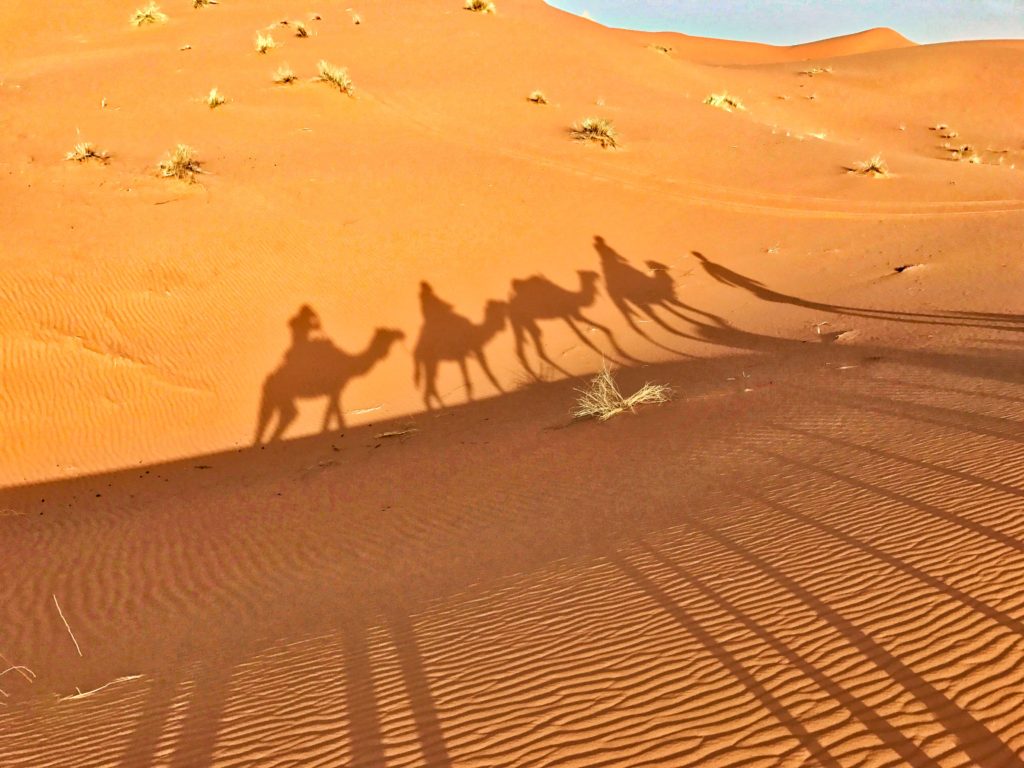 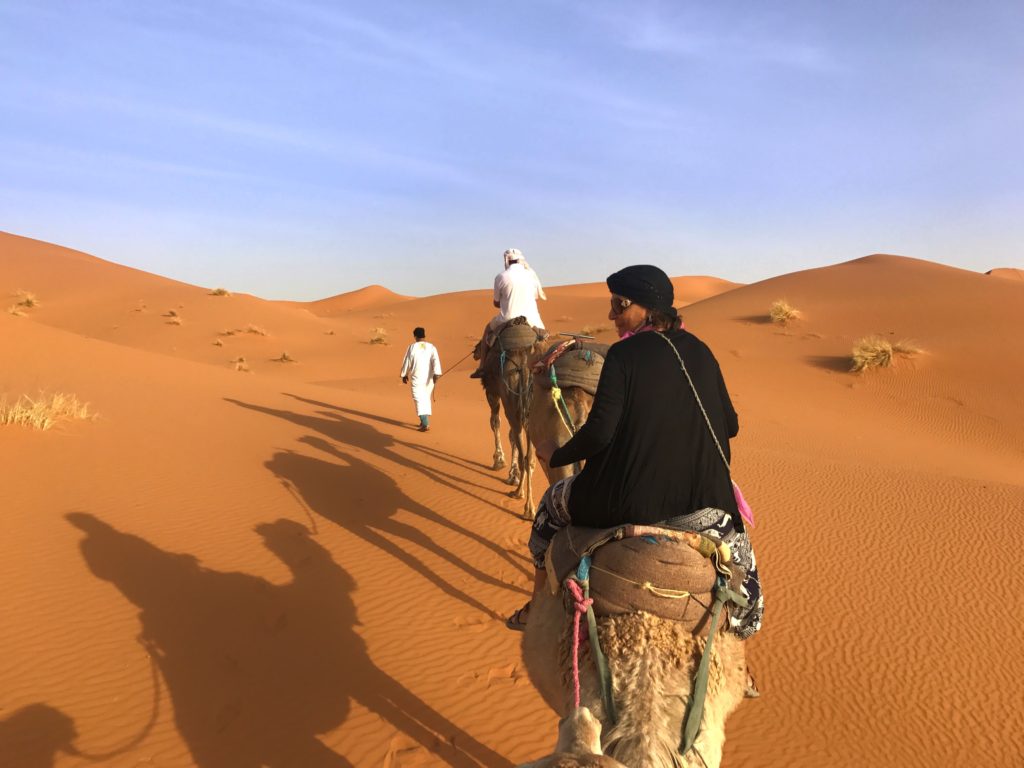 After the ride, Mansour had arrived; so we said our goodbyes to the staff, and left for Merzouga.

In Merzouga, we transferred to the Citroen, and started the drive to our next destination, the Dades Gorge; with several stops along the way. We passed through the small town of Aoufous, and it seemed quite busy and had a market; so we stopped to walk around.

One person who spoke decent English asked to guide us around the market area, and for a few $’s, we agreed. It turned out that today was market day, and this include not only fruits and vegetables, but also cows, goats, sheep and donkeys.

So we started with the fruit & vegetable market and then wandered to the animal markets, and then back to the car. See pics below form this market. 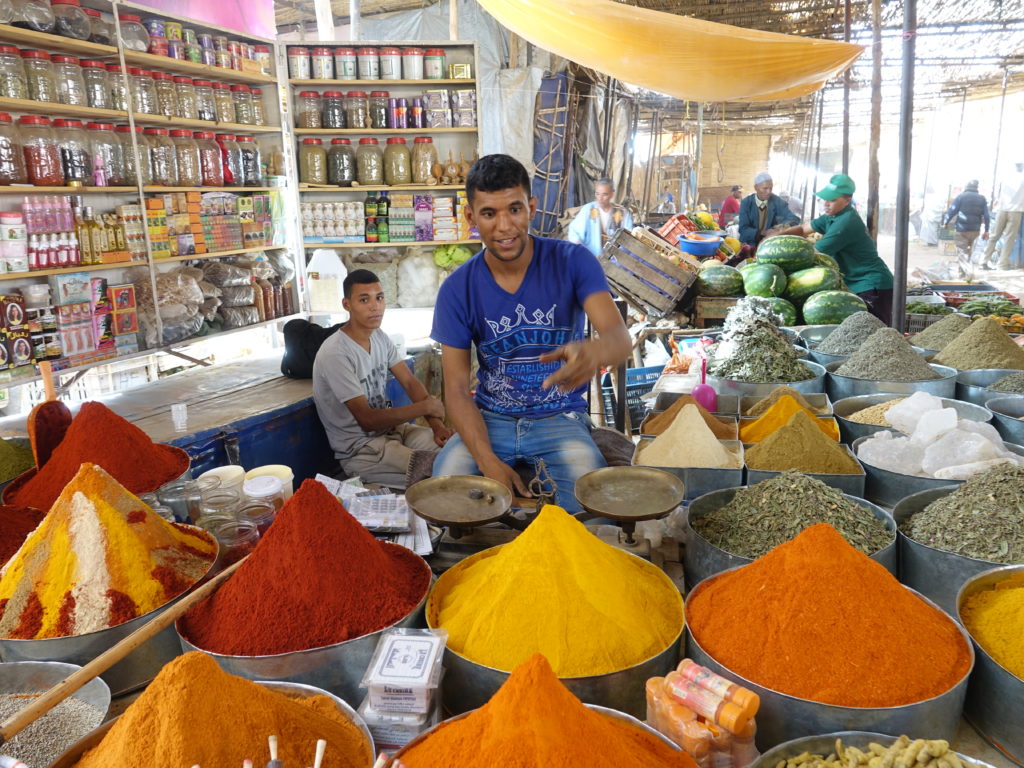 Bought some spices from this guy 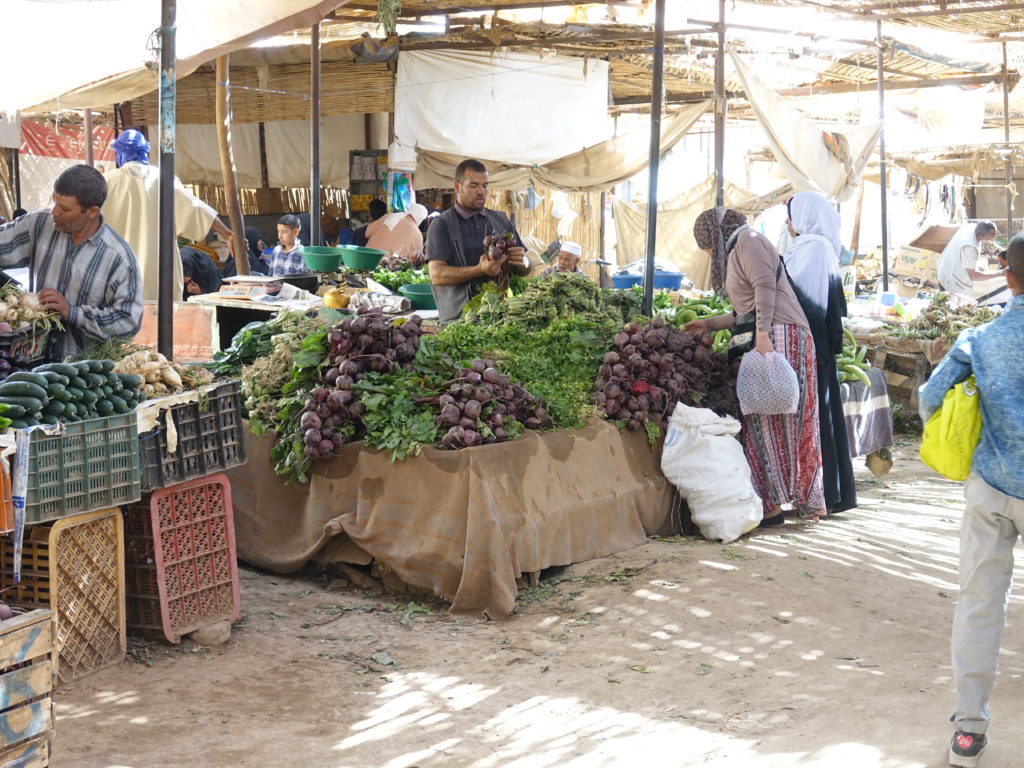 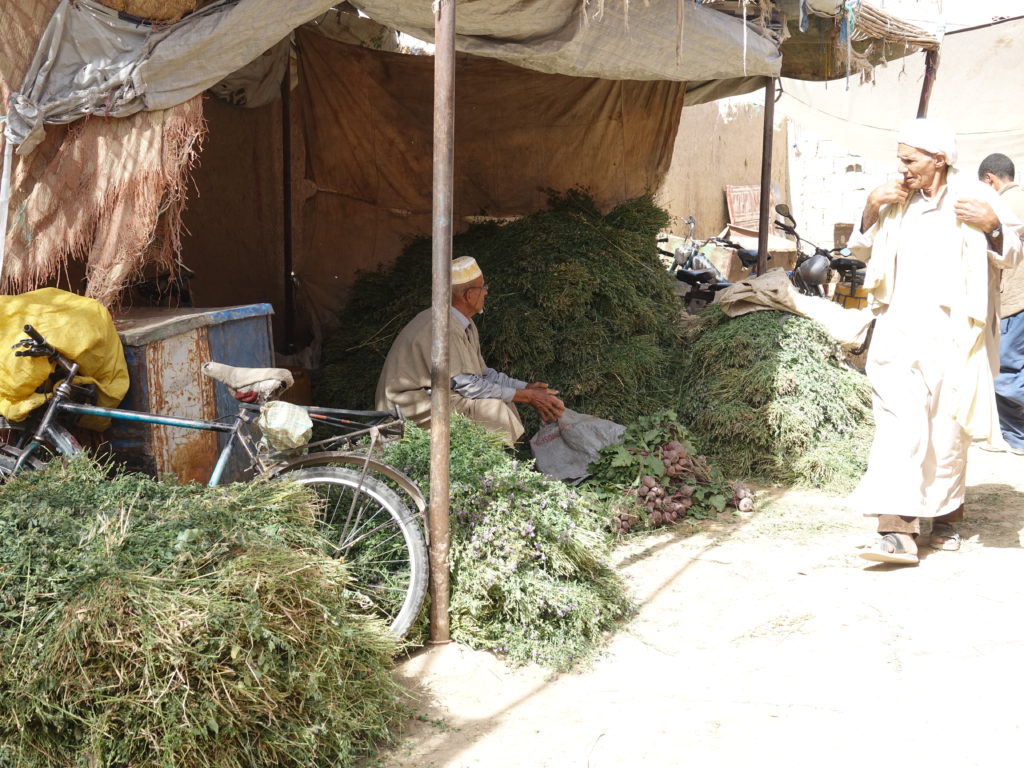 This green herb seemed to be very popular 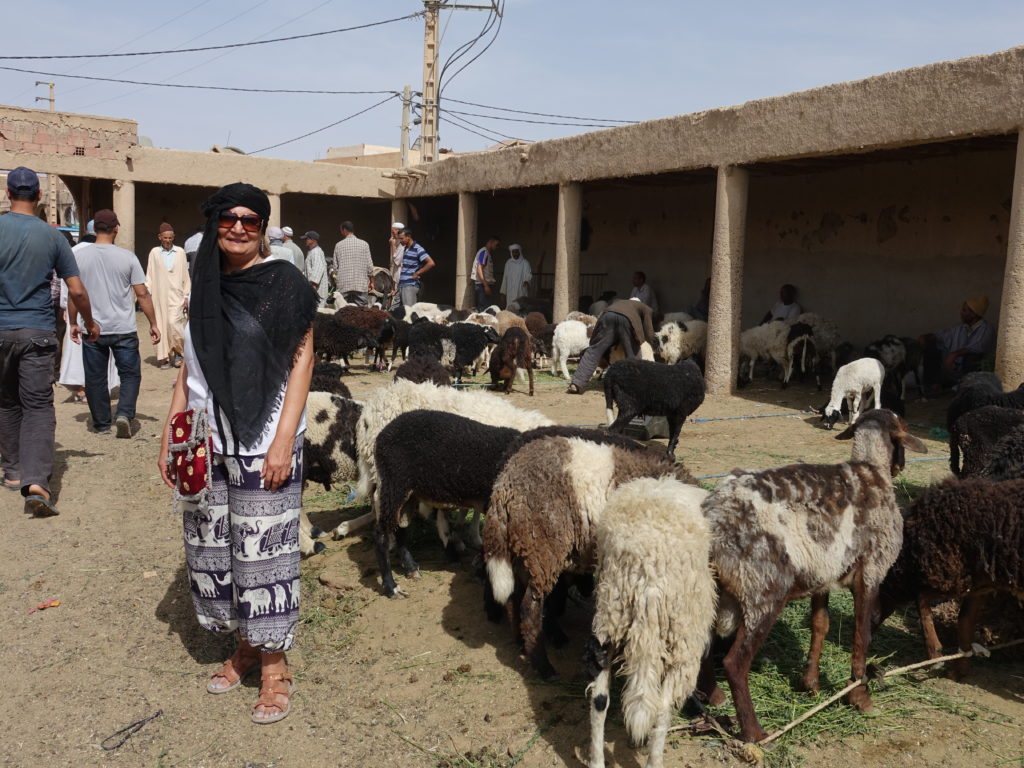 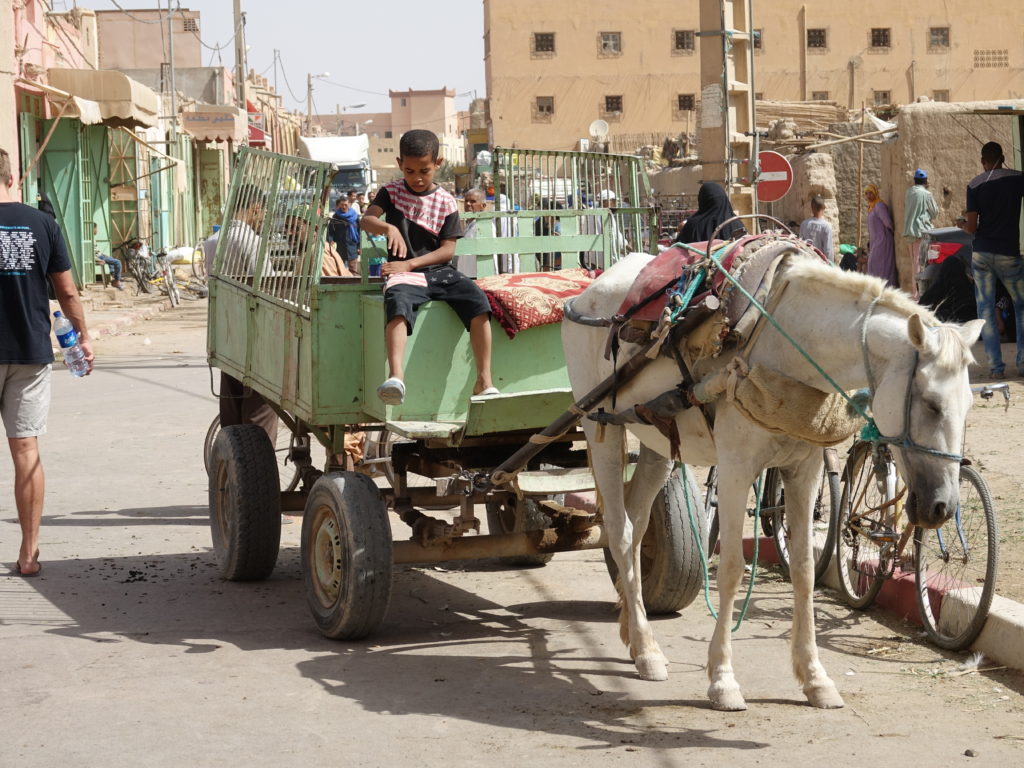 Kid and a Donkey 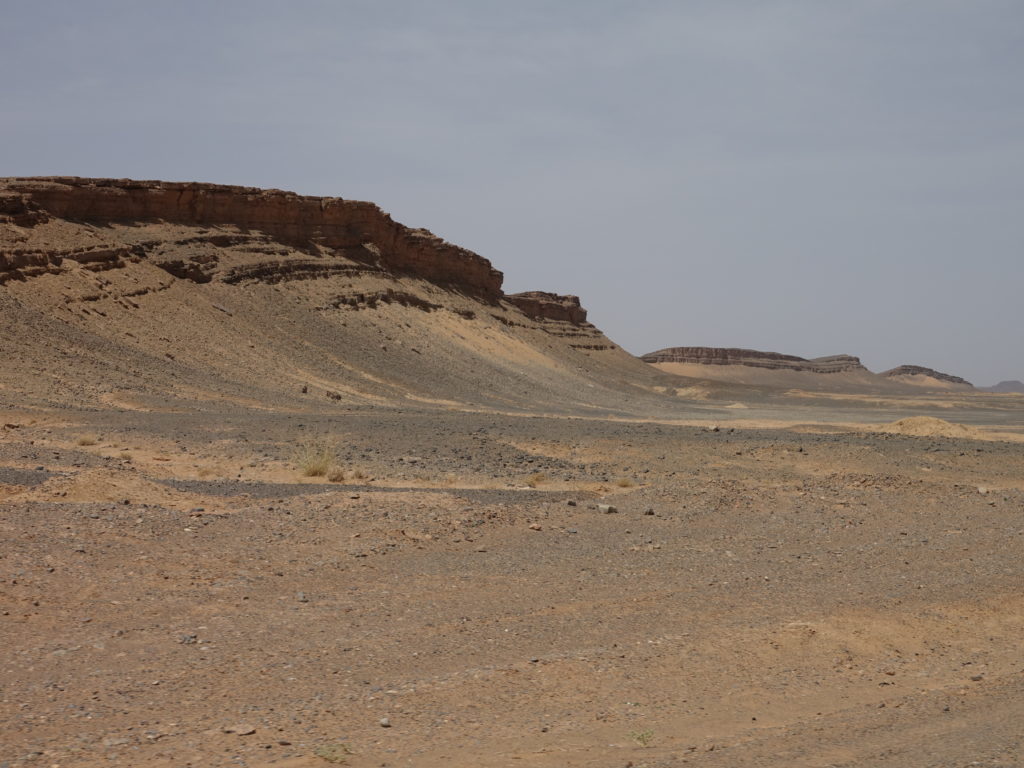 We continued driving to Er Rachidia, and the landscape was all still barren.

Getting closer to Er Rachidia, we came across more and more Palmeries; and the areas became more prosperous. 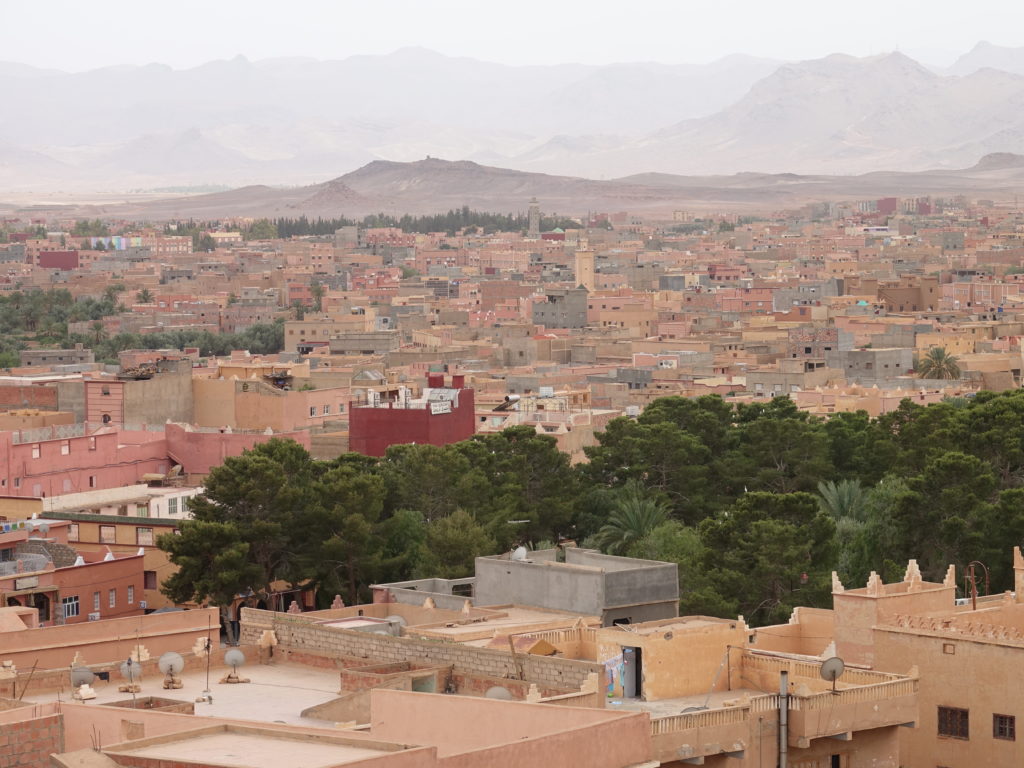 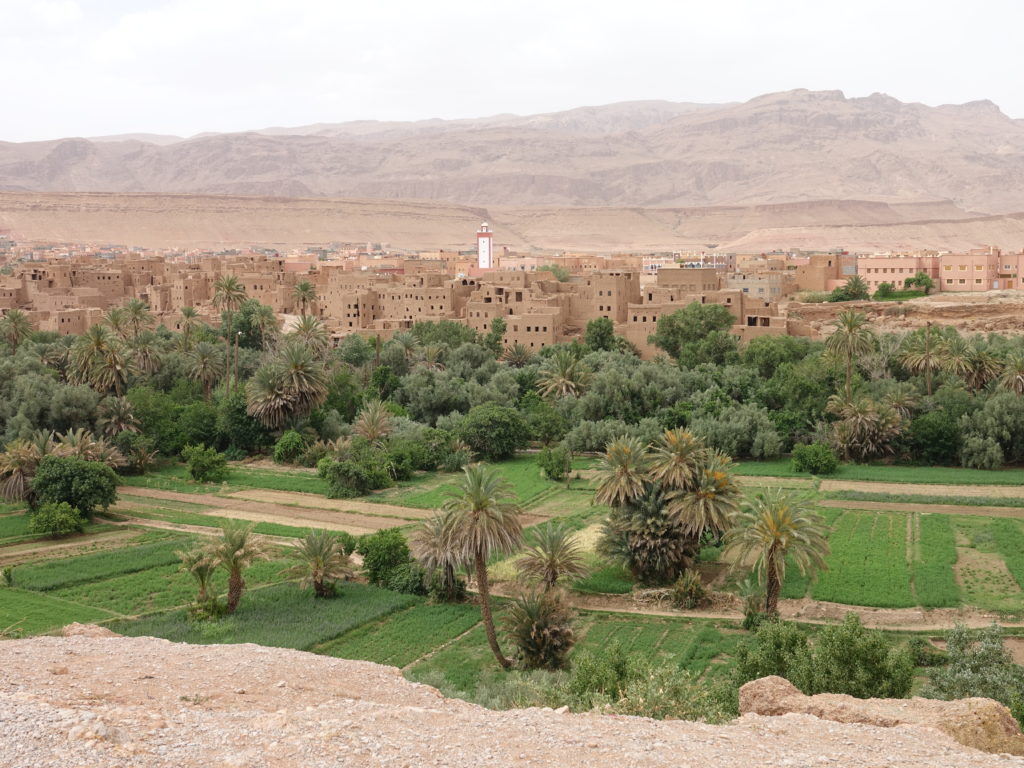 After a nice lunch in the town, and dieseling up; we got back on the road to Todra Gorge 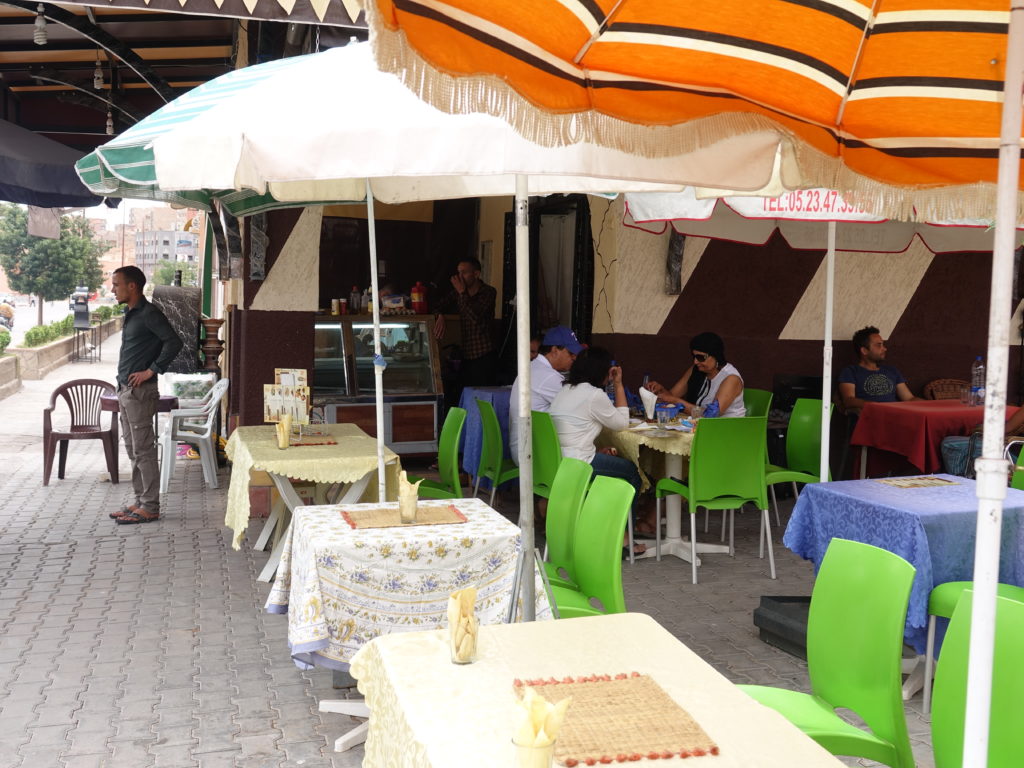 Along the way were more towns and Palmeries. Many of the towns had old crumbling Kasbah’s like the one below (Kasbah’s were old time strongholds of villages or feudal castles to keep intruders out and keep residents safe) 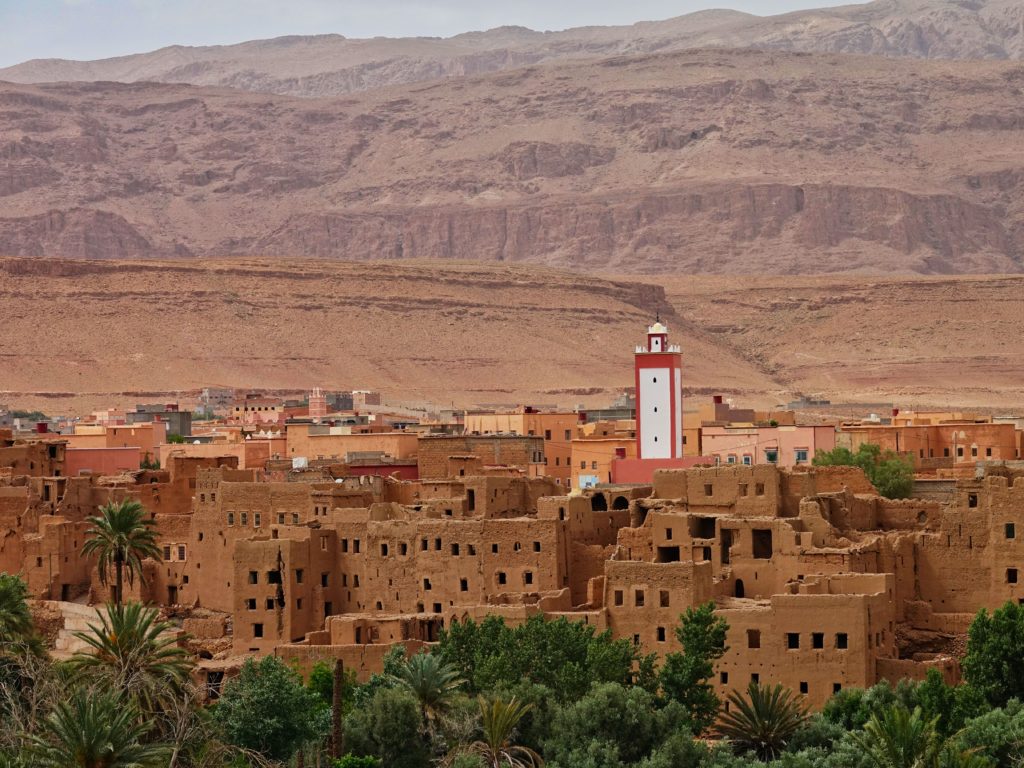 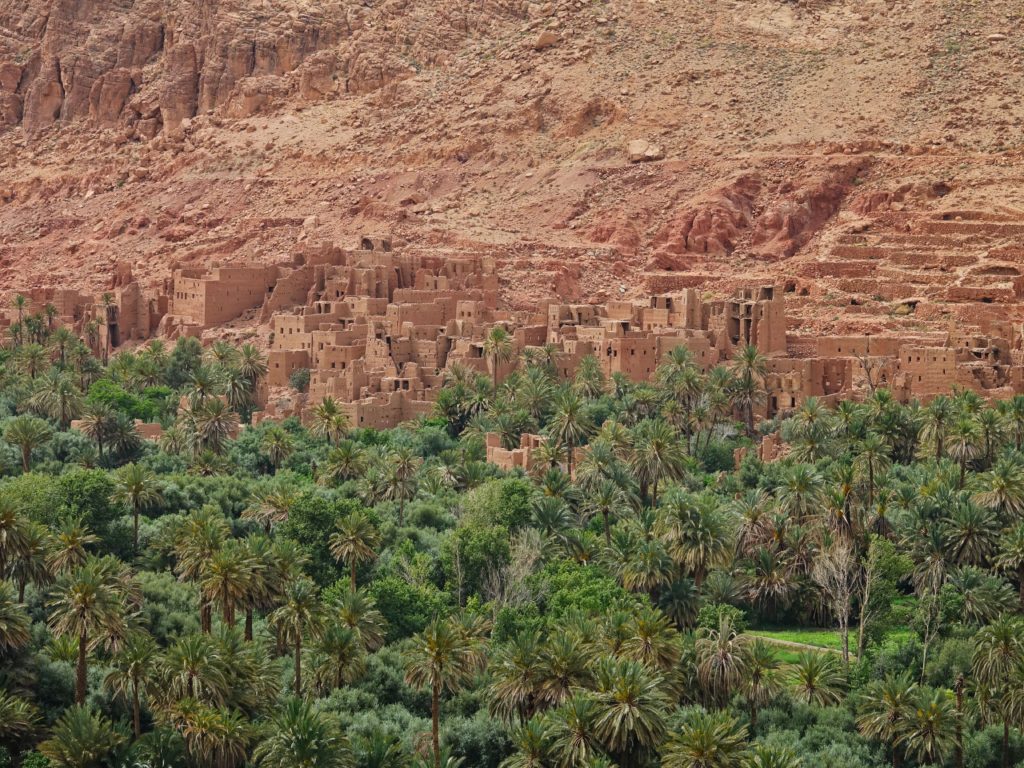 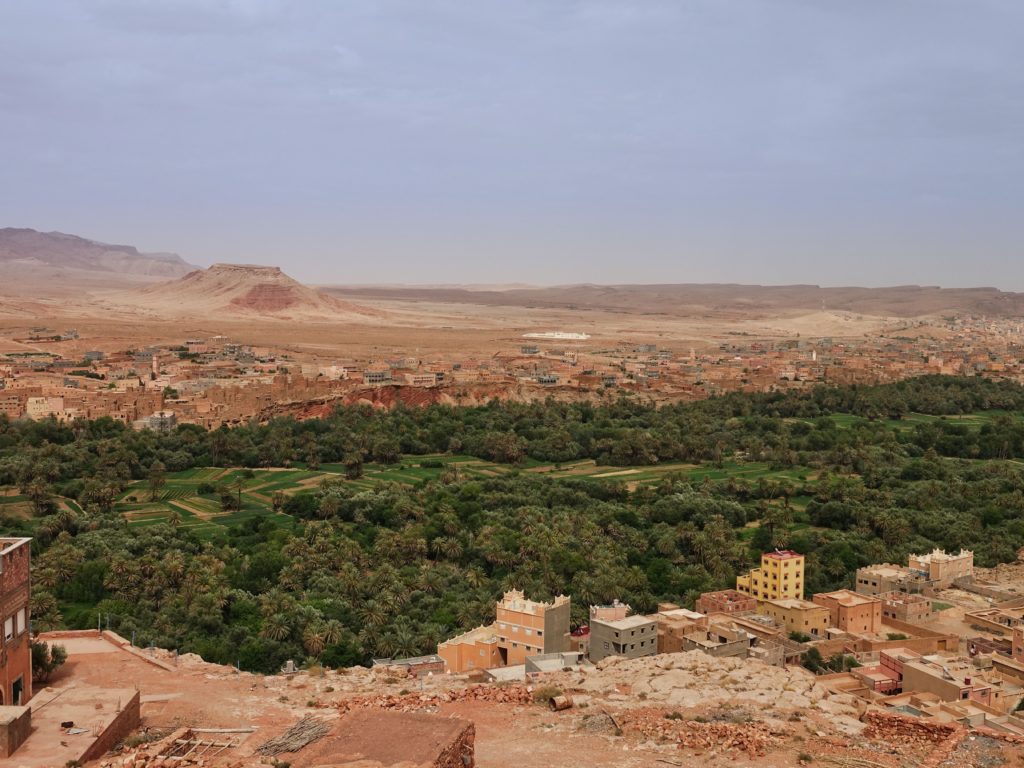 Palmeries among the barren landscape; thanks to oasis

Arrived in Tinghir, and just a few kms north, we reached Todra Gorge. As the name suggests, this is a gorge formed by a river; quite spectacular; almost like Petra except on a smaller scale, and with a river running through it.

What was more exciting about this place is that there were literally hundreds of locals, families and young people enjoying the evening here; picnicking, socializing etc etc.  See scenes below 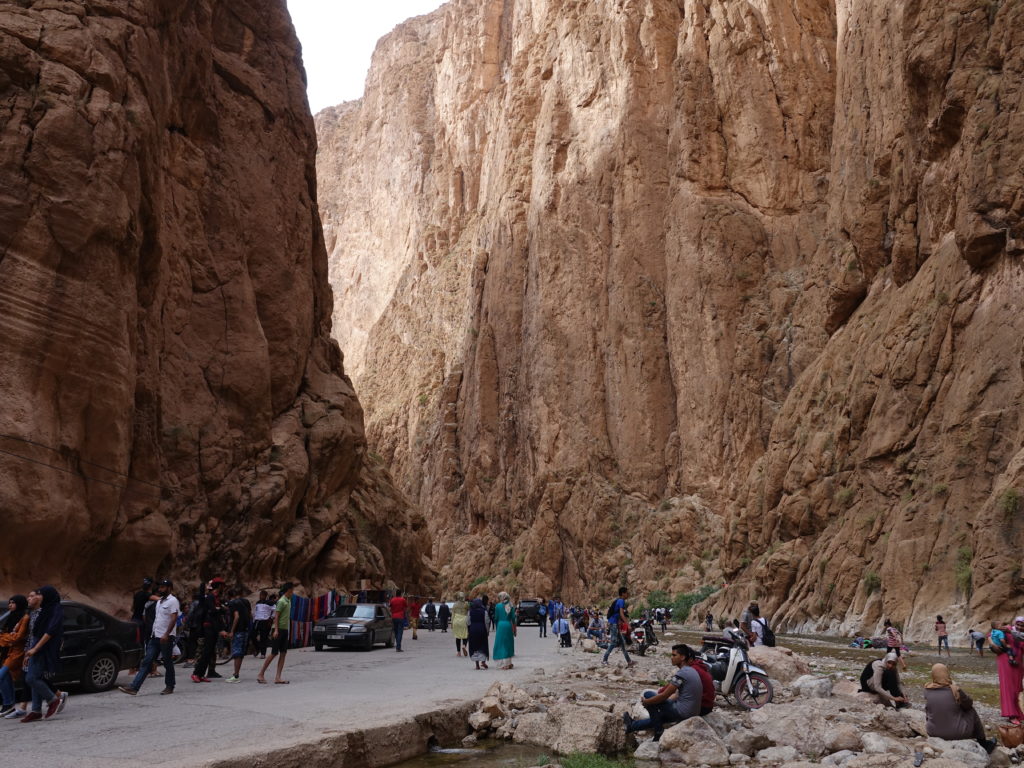 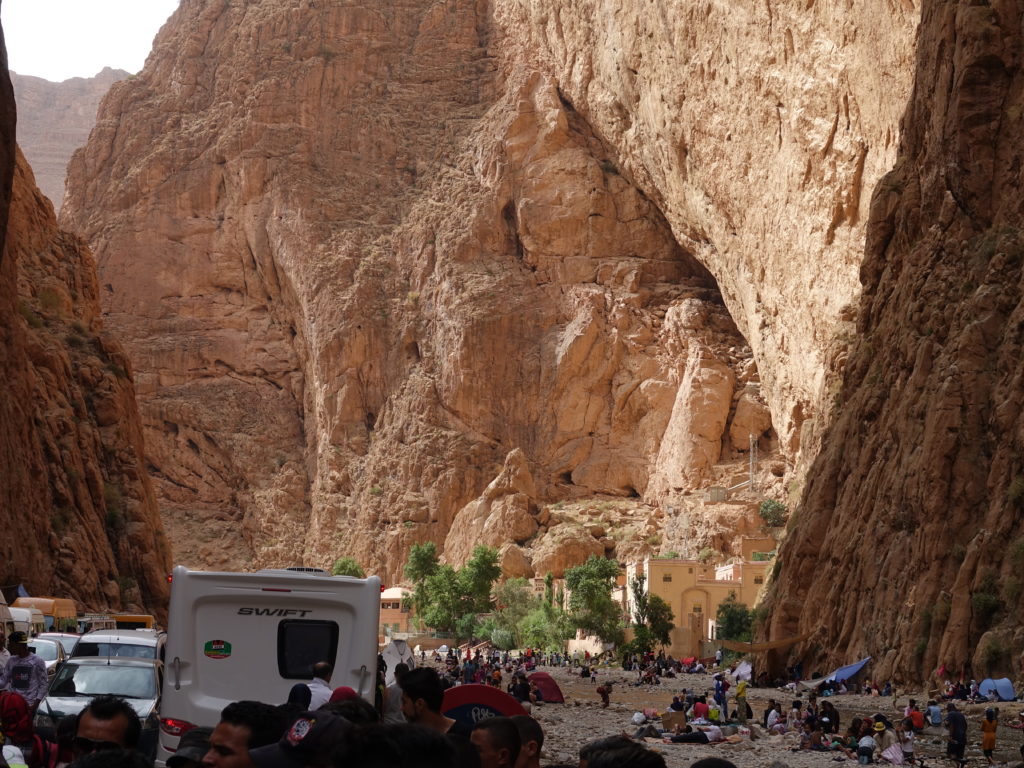 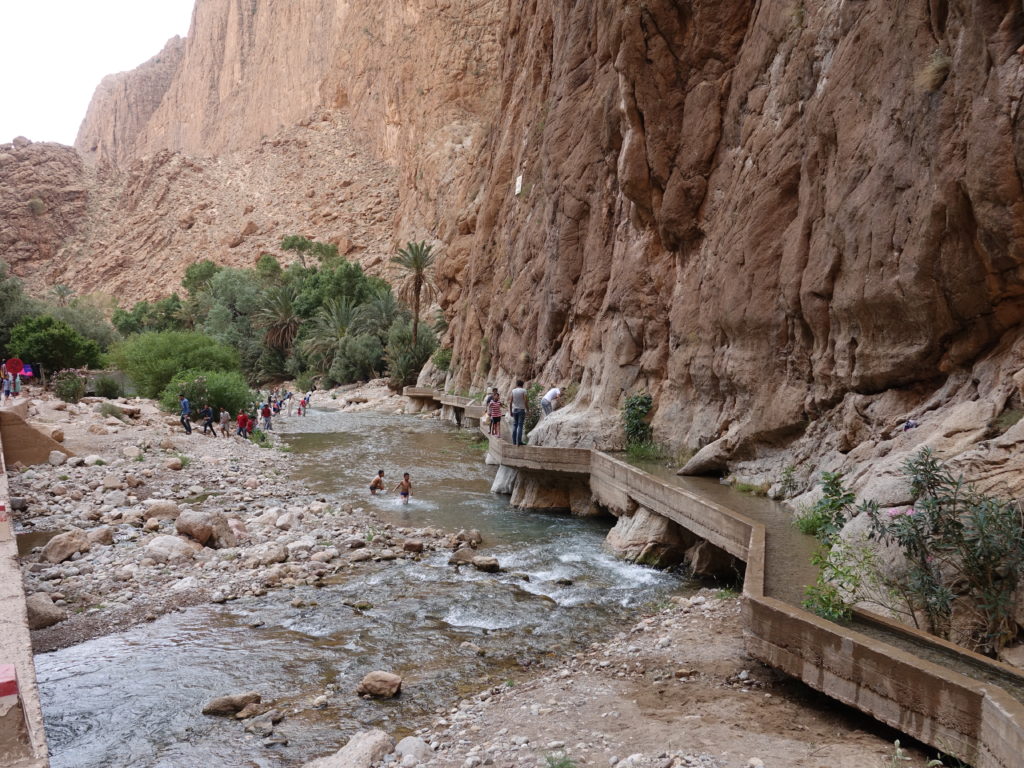 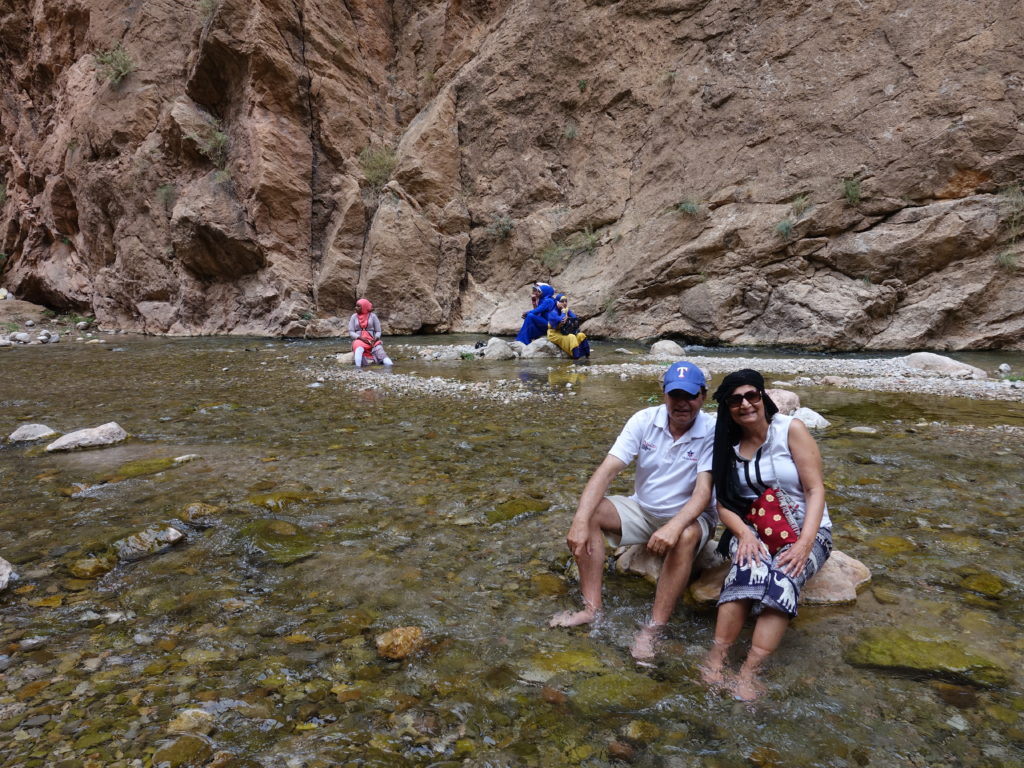 Cooling off in Todra river 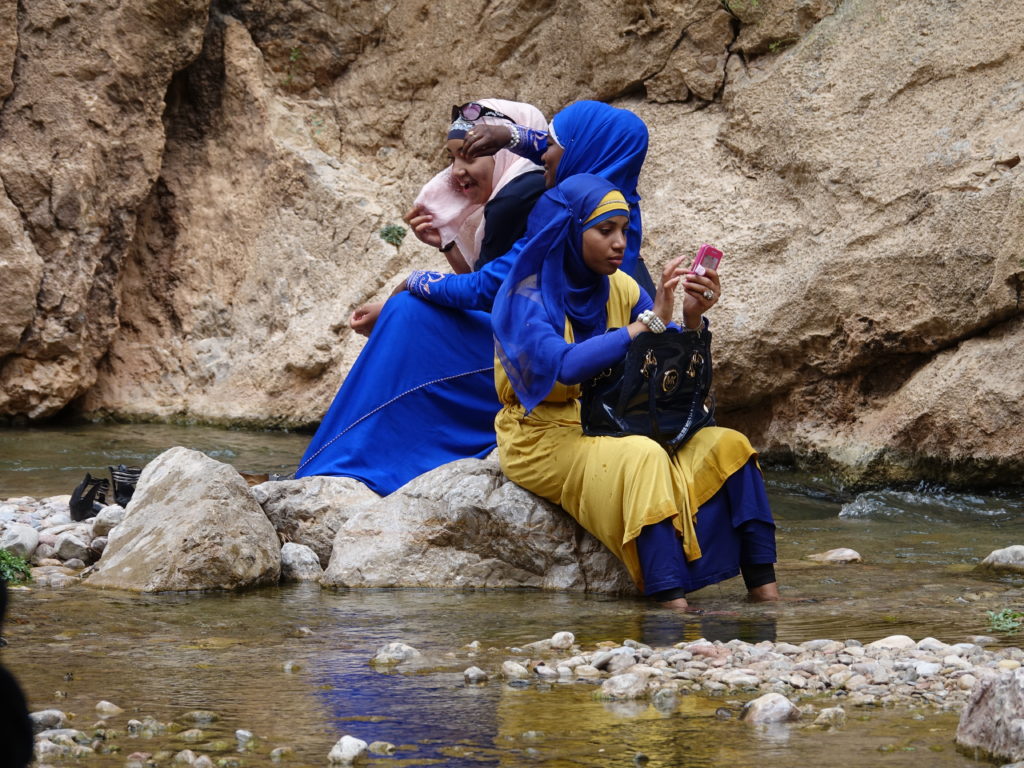 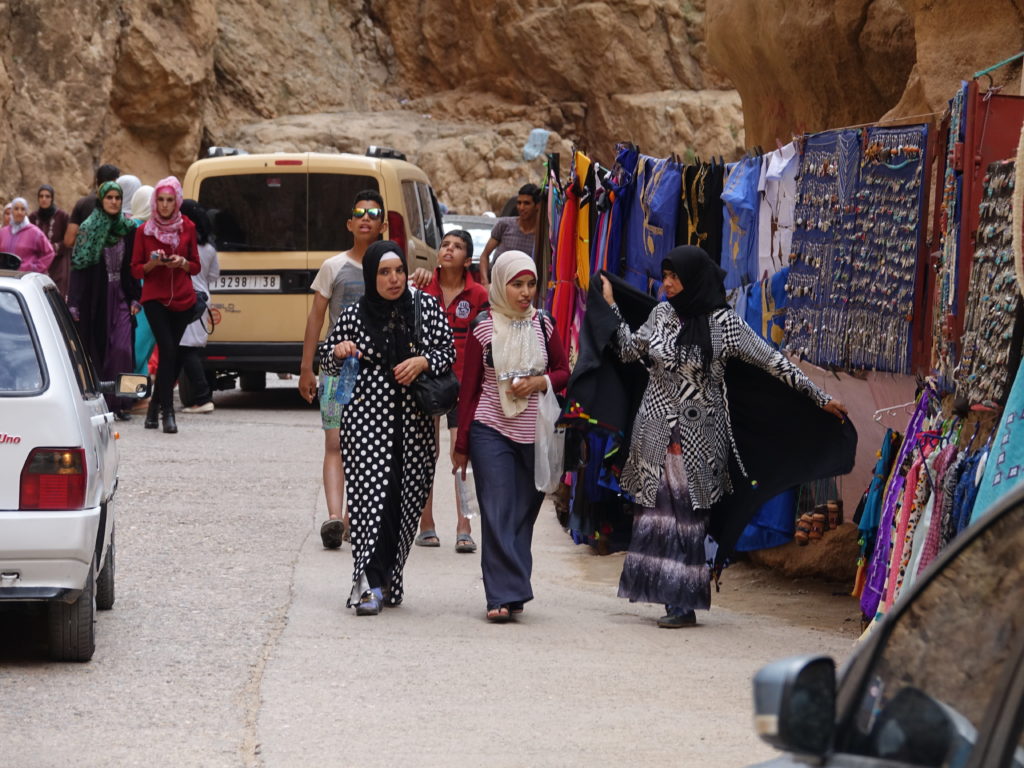 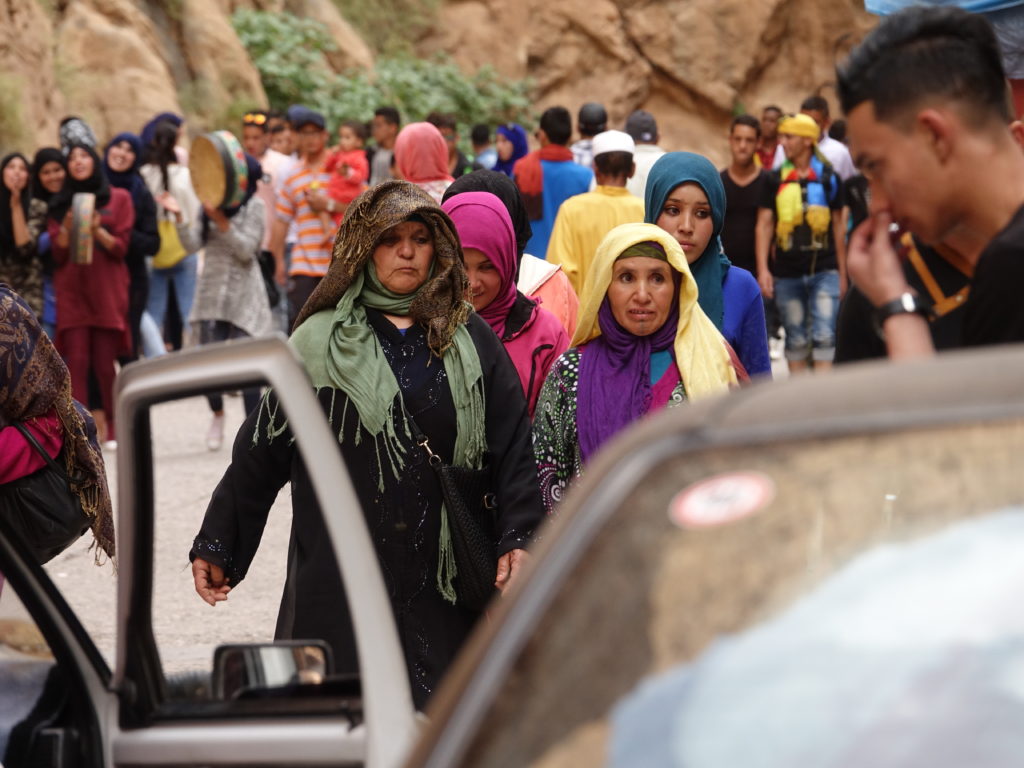 Young and Old were out enjoying 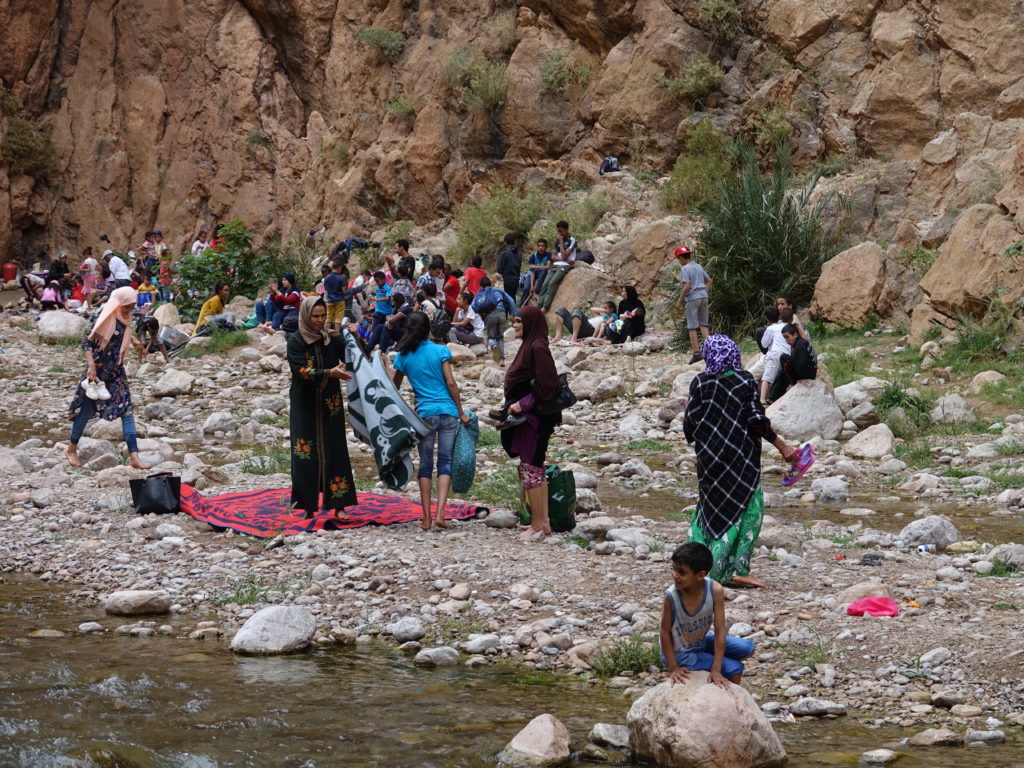 After spending some delightful time in Todra Gorge, it was time to drive to our destination in Dades Gorge. Some scenes along the way below 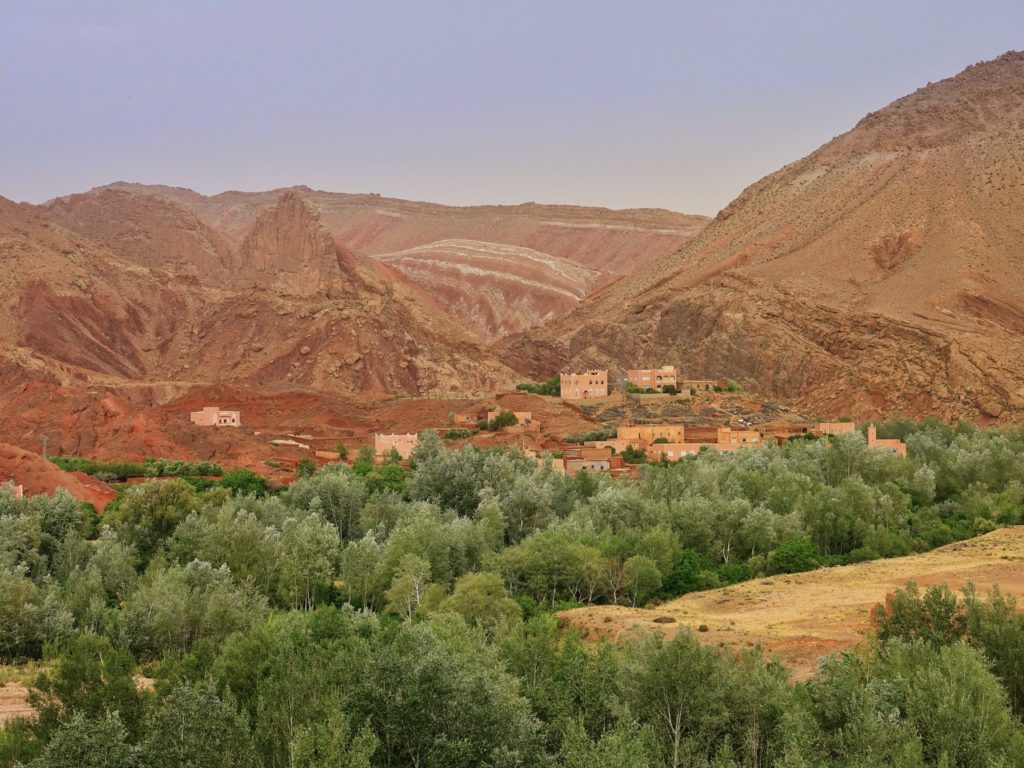 After getting a little lost, we finally made it to our BB IRocha in Dades Gorge as it was turning evening. After setting in and freshening up, we asked the owner where we could eat. This is a small village so not much choice, only Tajines; but he recommended a friend (Hassan) of his nearby who would cook us French or some oriental dishes.

So off we went and after asking for directions to Hassan’s place, we finally found Le Basilic, a small place with 1 table and a small kitchen. Hassan gave us a few choices from his limited menu for French/Chinese cuisine, and we agreed (not knowing exactly what we would be getting). Trust me, he said, and come back after 1.5hrs (everything in Morocco is cooked from scratch). We found this to be too much, so we negotiated this to 1hr, and went off to a nearby place for drinks. 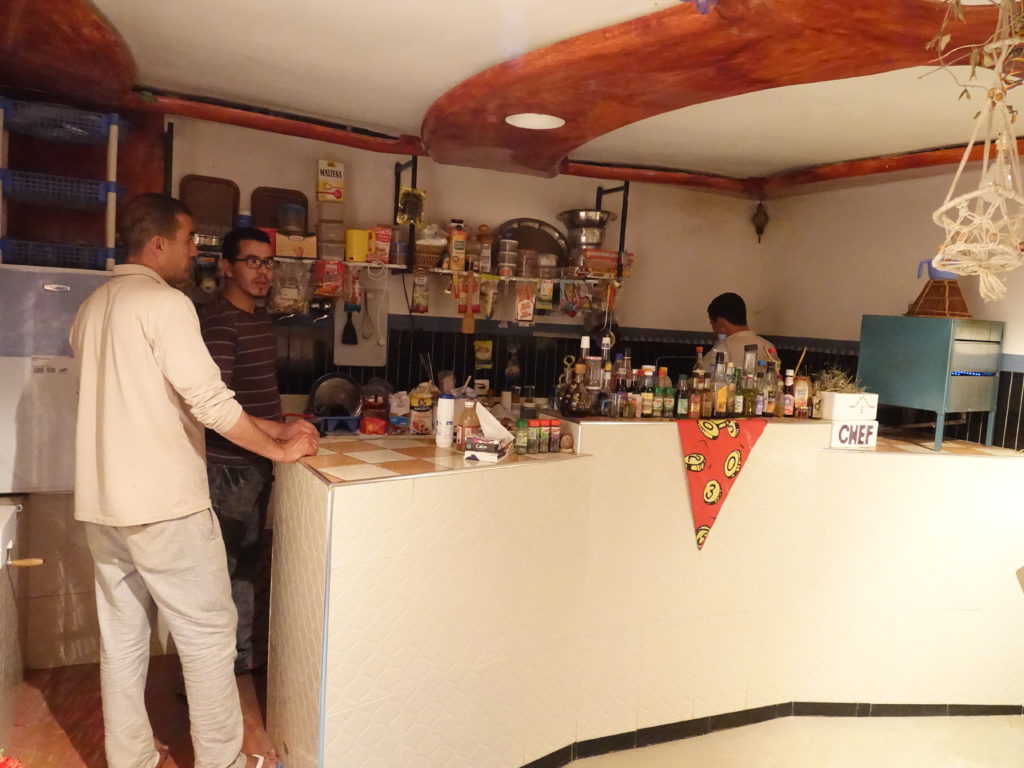 Hassan’s kitchen at Le Basilic. His oven is on the right

Came back after 1hr, and Hassan was ready for us. He started us off with starters and mint tea 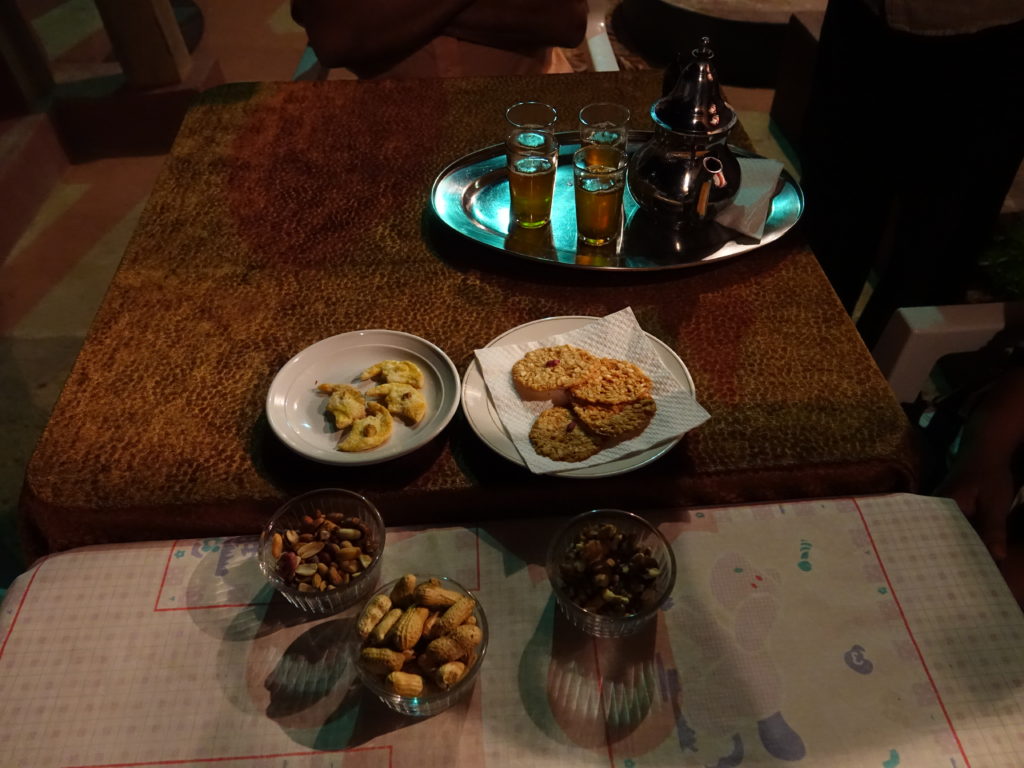 Followed by the main course of chicken 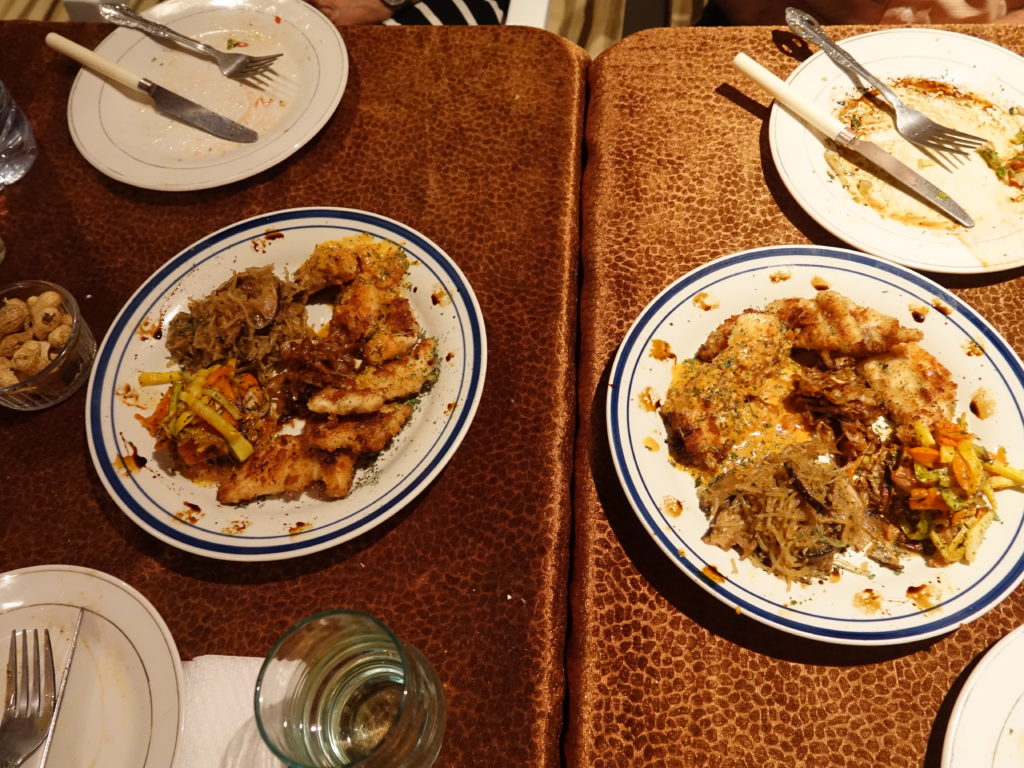 Followed by tarts for dessert; everything home made, from scratch 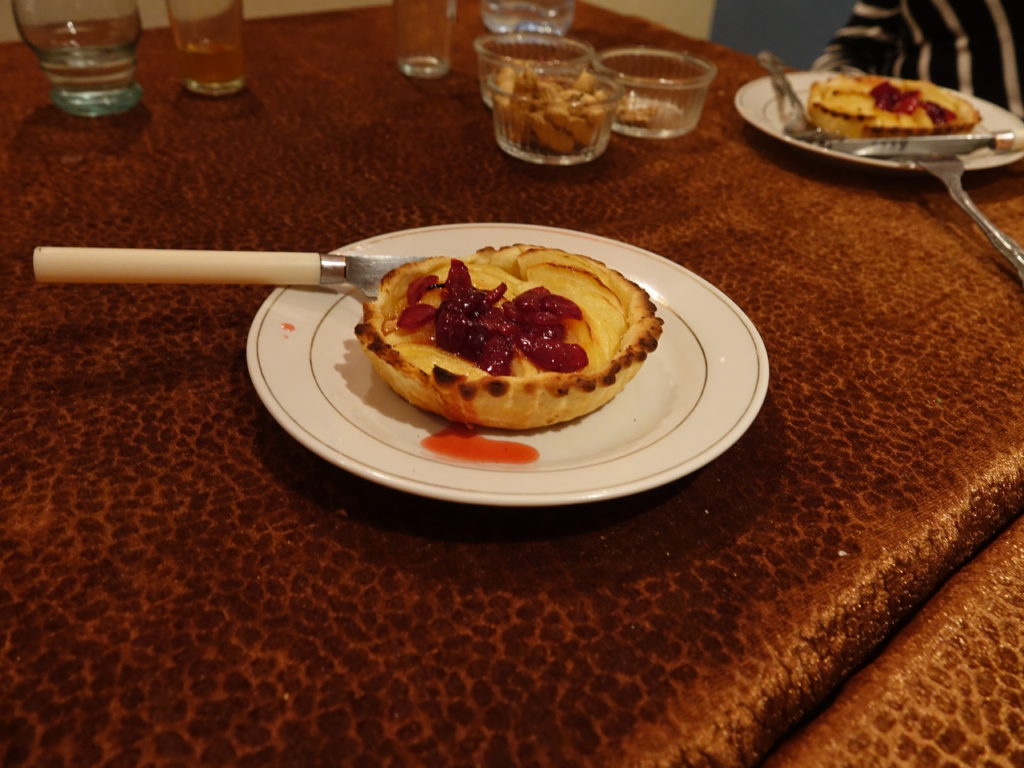 This has to be one of the best and tastiest meals we have ever eaten. Each dish and food had a unique taste that was very nice and engaging to the palette. Apparently, Hassan is a proper chef who studied under a French chef, and is starting out in his own business. He makes everything from scratch, using the freshest ingredients that he gets locally from the gorge; including the herbs he uses that he showed us; still green and fresh on the stalks. And a great change from the Tajines :). What a rare find in a small village.

After a very satisfying meal and busy day with lots of different sceneries, we hit the sack.

This entry was posted in Africa, Morocco, Morocco May 2017