When we got back from Guatape at the Estation del Norte the day before, we saw a tourist info booth and so went to get maps and other simple info, as we had not found a Tourist info place yet. The guy manning the booth spoke perfect English (had lived in Miami), so we got good maps, and good guidance on what else to explore in Medellin, and how to best use the subway system. This guy turned out to be quite useful.

Medellin is built in the valley of Aburra valley, and is well developed in the valley part (where the Medellin river flows) with many highrises and barrios or suburbs like El Poblado etc. On the hillsides of this valley, the area is naturally more difficult to build on.  So, the less well-off people made their homes on the steeper hillsides; these areas are not “slums” as the homes are well constructed of concrete and cinder blocks; with decent services; but are definitely the lower class, high density, neighborhoods. This is where Pablo Escobar recruited his drug dealers, sicarios (thugs/assassins) from; and because he spent money in these areas on basic services (schools, parks, sports facilities, day & medical care etc) for the locals, he had a very strong base of support here.

After Escobar, the Govt decided that to better integrate these neighborhoods, they build sports facilites, community centers, and libraries and activity centers in these poorer neighborhoods. In addition, they extended the subway to reach several of these neighborhoods by making cable car extensions from the subway stations in the valley floor. This made is much easier for the people to reach and get to jobs in the city proper. What took over 1 hour now takes 10 mins. So much easier to get around from these hillside homes to any part of the city.

We decided to go explore some of these connected Barrios; but first we went into Envigado town center to have breakfast and check it out. Flagged down the Metro bus outside our apartment, and asked to get dropped off at Parque Envigado.

Below are some scenes from there.

We asked a local café for where we could get breakfast and they directed us to a nice breakfast place in the square.

We saw a couple of dentist offices nearby, and so went into one that looked very modern (orthodontal office that appeared quite busy) with multiple dentists on staff, and asked about getting dental cleaning done. They found 1 hygienist on staff who spoke some English and the deal was that they wanted to examine our teeth, x-rays and all, and then prescribe treatment, including cleaning. So we spent a few minutes to convince them that all we needed was cleaning done. The Hygienist went off to speak to a dentist and came back and said they would do it in about 20 mins, for $42 each. Negotiated a 10% discount for 2 people and so for $38 each, we had our teeth cleaned. The dentist did the cleaning herself, did not speak English, but had a modern, clean office and had all the paraphernalia that we have experienced at our US dentist offices. A pleasant experience.

We then got an Uber to the Envigado subway station ($1.79 fare) and took the subway to the Acevedo subway station, and then connected to the cable car (included in subway fare) up to Santo Domingo barrio; all for 65 cents each.

Santo Domingo used to be a dangerous place at one time during the drug wars, but was now very civilized. Some images from Santo Domingo barrio are below

Shortly thereafter, we caught the cable car back down the steep slopes to the subway station, and we decided to go to another hillside barrio; San Javier, which used to be the most dangerous neighborhood and Escobar’s stronghold. We were told that in this Barrio, people could not walk outside at night for fear of getting caught in drug cartel feuds with daily shootings. This restricted people to go to work only during daylight hours.

Back at Avecedo subway, we took the subway to San Antonio station, where we connected to another cable car system, & onto to San Javier station in Communa 13, high on the hillside; the one-time the stronghold and epi-center of Escobar’s operations.

Info for Tourists
Here, the authorities had built escalators to help people get from cable car-inaccessible places in higher grounds than the cable cars could reach, to the lower parts of San Javier. The Escaleras Electricas, are a set of escalators that are 28 flights of stairs high.

To get from the San Javier to the base of the Escaleras Electricas, one can either walk (long), take a bus or a taxi. We chose to take an Uber, and since these are not so common in this area, it took a while for the Uber driver to show up. He turned out to be a student, driving Uber to make money during off times, and he spoke some broken English. He was not familiar with this area, and so he had to stop and ask a number of times.

He said his parents were police officers in Medellin, during Escobar’s time; when Escobar was paying people to kill policemen; he told us he could not believe how his parents survived under such conditions. The roads here were quite narrow, and very steep all around. So no public transportation can reach these areas.

Some scenes below, as we drove around this steep community trying to find the Escaleras.

We arrived & started walking to find the Escaleras, and along the way, we walked narrow gullies, with a lot of nice artwork on the walls etc, all encouraged by the local authorities, providing free paint.

It was along this walk that I smelt marijuana being smoked by 3 young men; that was the one and only time I had witnessed any drugs being used in Colombia.

We finally arrived at the actual Escalera’s and upon asking the policemen there, it seemed that our Uber driver had brought us to the top of the Escaleras, and not at the bottom. Oh well.
Here, at the top, there were street entertainers and people around; so we started making our way down the Escalators; some scenes along the way.

Below are some scenes along the way

We finally reached this area where buses were passing, so we flagged one down, and asked if he was going to San Javier, and he was, so we hopped on. A short while later, we arrived at San Javier, and got back onto the cable car to get back into the valley.

Back at the subway station, we took the subway to Estadio station and got off. This area was recommended to us by the Tourist Info guy we had met previously at the bus terminal. This area had, on one side, a large complex of sports facilities, including multiple pools. On the other side, was a suburb called Laureles; which was supposed to be a very pleasant area for restaurants etc. We had located a Lebanese restaurant that had high ratings, so we made our way there; a very pleasant walk.

Along the way, we saw a man with 2 kids walking by us; he turned around and stopped, and asked us in English if we spoke English. We started talking to this guy, and turned out he was Ricky Shetty, from Vancouver, on a world tour with his family; travelling as a Digital Nomad (Daddyblogger). What a small world. After chatting with Ricky, we exchanged info, and went over to the Lebanese restaurant for a nice drink and dinner

After dinner, we were walking back towards Estadio station when we came across a salon that did Manicures and Pedicures. So Dilshad got both done, and I had a Pedicure done; the first time in my life. Felt good 🙂 . We paid $12 for both of us and caught the subway and uber back to our apartment, for a well deserved sleep

Next evening, we had a flight back to the states. So in the morning, we went back to Envigado town, had another great (& cheap) breakfast, and found a hair salon, so had to get my obligatory wash & haircut for $3. Dilshad had her hair washed and blow-dryed for $5. Not bad at all.

We also came across an organic farmer’s market in front of the Church, and got some fresh cake, fruit and salsa here

We made our way back to the apartment after strolling more around the town, packed up our suitcases, and tried Uber to take us to the airport. But this time, rush hour had started, so Ubers were quite few and therefore expensive. So talked to the doorman and he got us a regular taxi driven by a young man that lived in the same building as we were. He picked us up and dropped us off at the airport in Rio Negro for $25. No english.

We checked into the American Airlines counter, and after getting our seats, were informed by the American Airlines staff that we were going to be refunded $55 as we had overpaid on Taxes when we made our online bookings. So they gave us 165,000 Peso’s in cash. Peasant and nice surprise; for the honesty displayed. Time for Duty free shopping 🙂

We made it back to Miami on schedule, but since our ongoing flight to Dallas was oversold, we decided to get to Raleigh NC instead, stay overnight and take the next day’s flight to Dallas. Ah, the joys of staff-travel.

A few thoughts on Colombia
This is definitely a 1st world country, with great infrastructure, very nice people, great climate and they have definitely recovered from the painful days of the drug cartels era. We hardly saw anyone smoking cigarettes, and infact, on the bus to Guatape and back, the back of each seat had a note that read “don’t smoke; eat fruit instead”. Both Cali and Medellin were very nice, civilized and extremely clean places. Street food was never an issue anywhere; and best part was the fresh fruit and vegetables. In Medellin, our apartment windows did not have any screens on them; not needed, as there are very few insects there.

We kept our windows open all the time and never had any insects come in. There are many places to explore in Colombia, and we need to come back and explore some more. Definitely worth visiting; while the exchange rate is still very favorable. 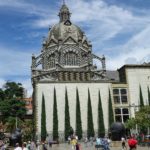 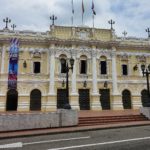 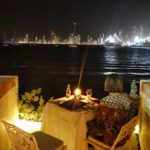 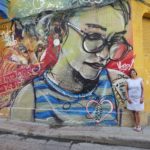