We had planned to stay in Tashkurgan for 2 nights to get acclimatized to high altitude, and to meet & get to know some Tajik Ismaili’s, before crossing overland into Pakistan via Khunjerab Pass. However, we found out at last minute that the border crossing is closed on weekends, and so we had to reduce our stay in Tashkurgan and cross the border on Friday, while it was still open.

So, woke up early Friday morning, to get to the bus station since it was never clear about how to get tickets for the bus and what time it was leaving. Walked to the bus station as there were no taxis visible at this early hour (8AM). Went to pay for the bus ticket, and were informed that we had to get the bus ticket at the Customs place (different from the bus station; about 2kms away; Only yesterday, this same office had told me I should come back on day of departure to this office to buy tickets ☹). 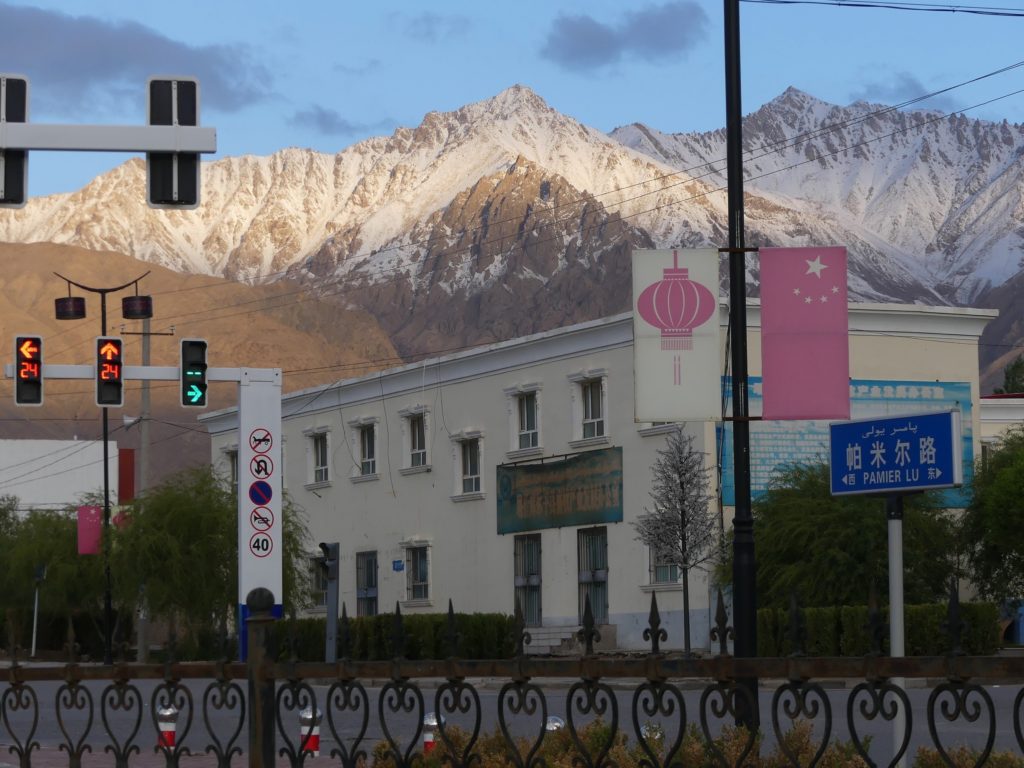 So had breakfast at Wakhan (Pakistani) café with Rehman, and were informed that the bus did not leave till 11AM; so we walked around the town again, had some more Yak milk yogurt again at our friendly Tajik Ismaili family grocery store (she would not take any money again). 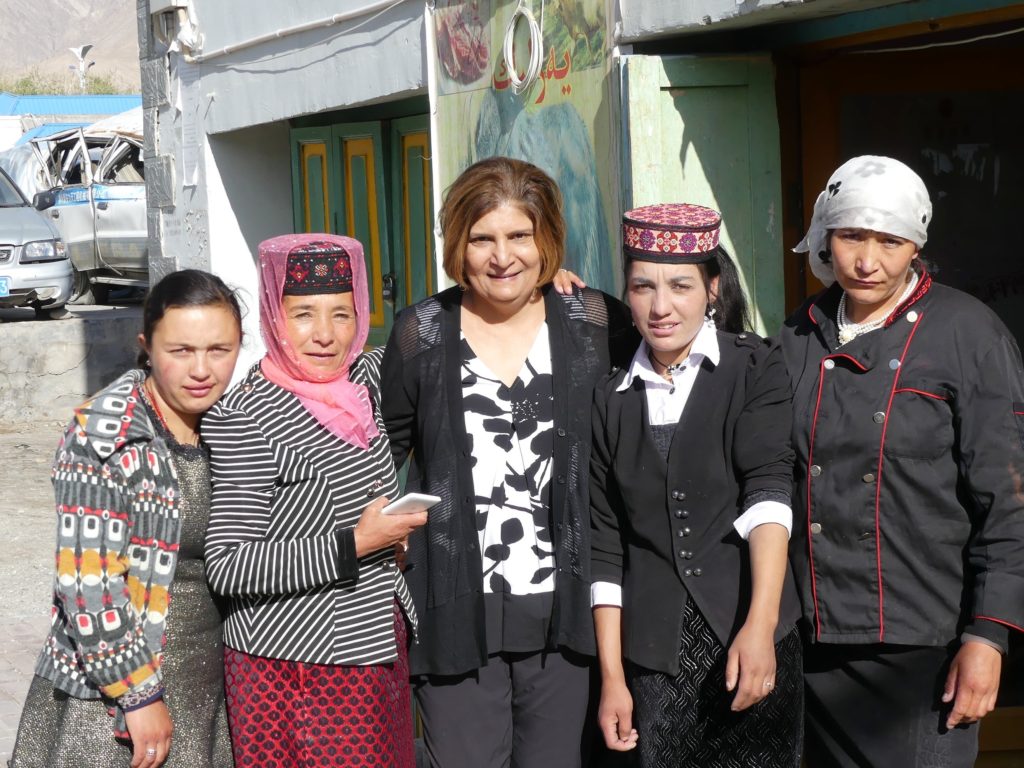 With the friendly Tajik Family 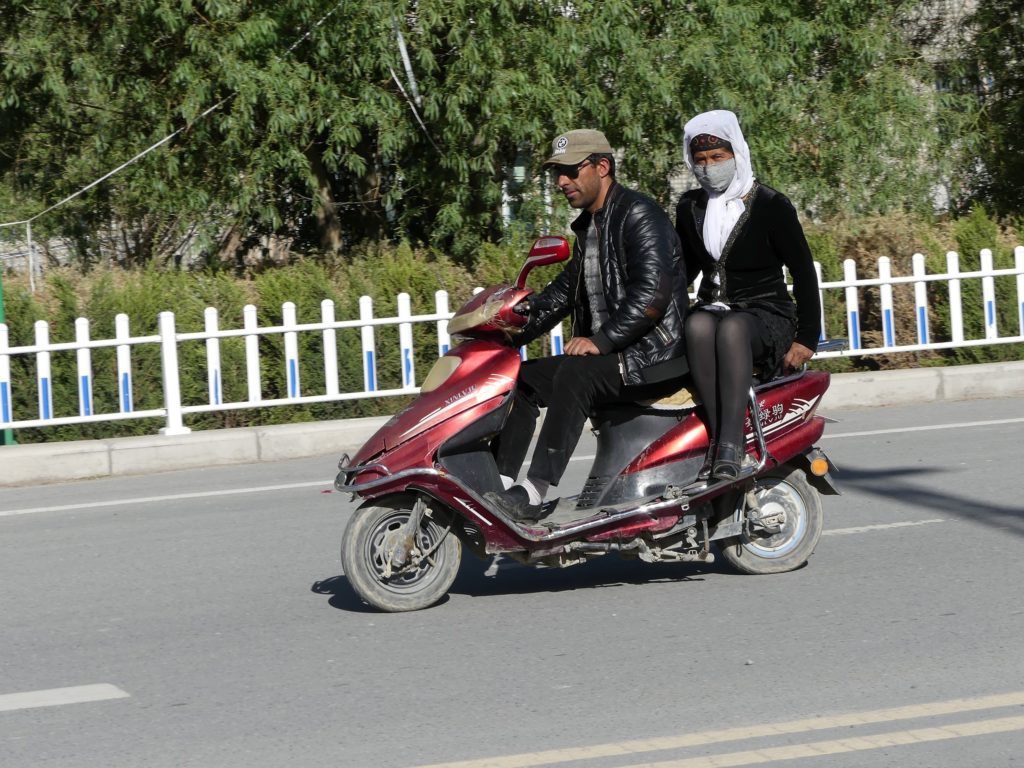 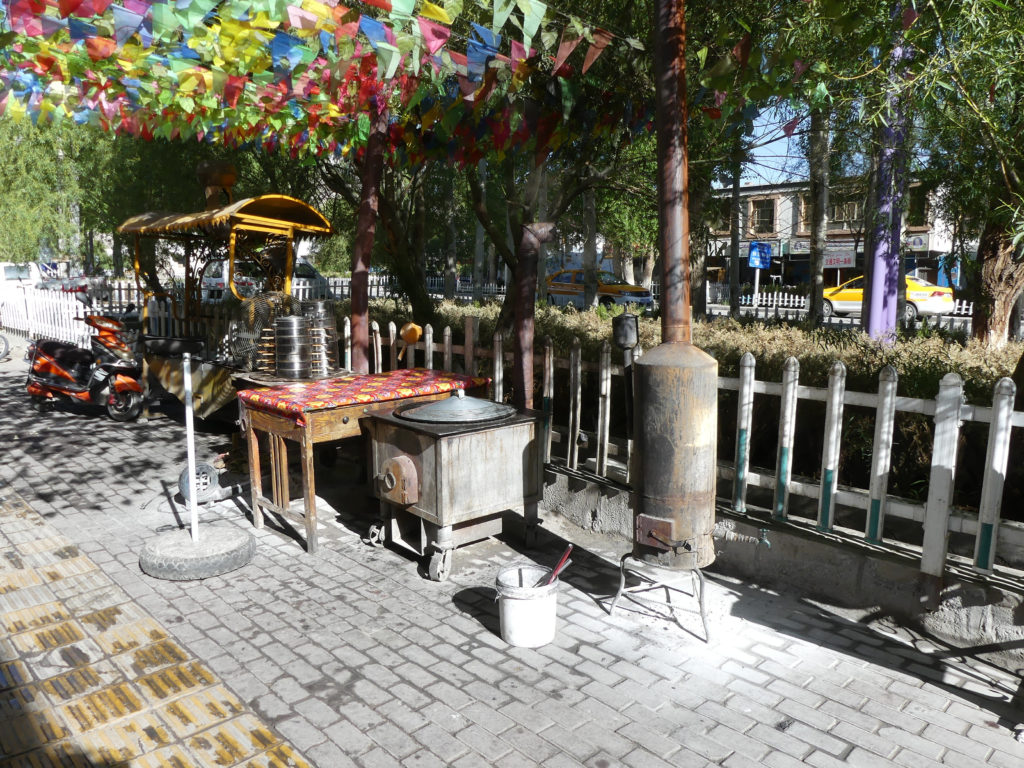 Outdoor kitchen getting ready for the day’s meals 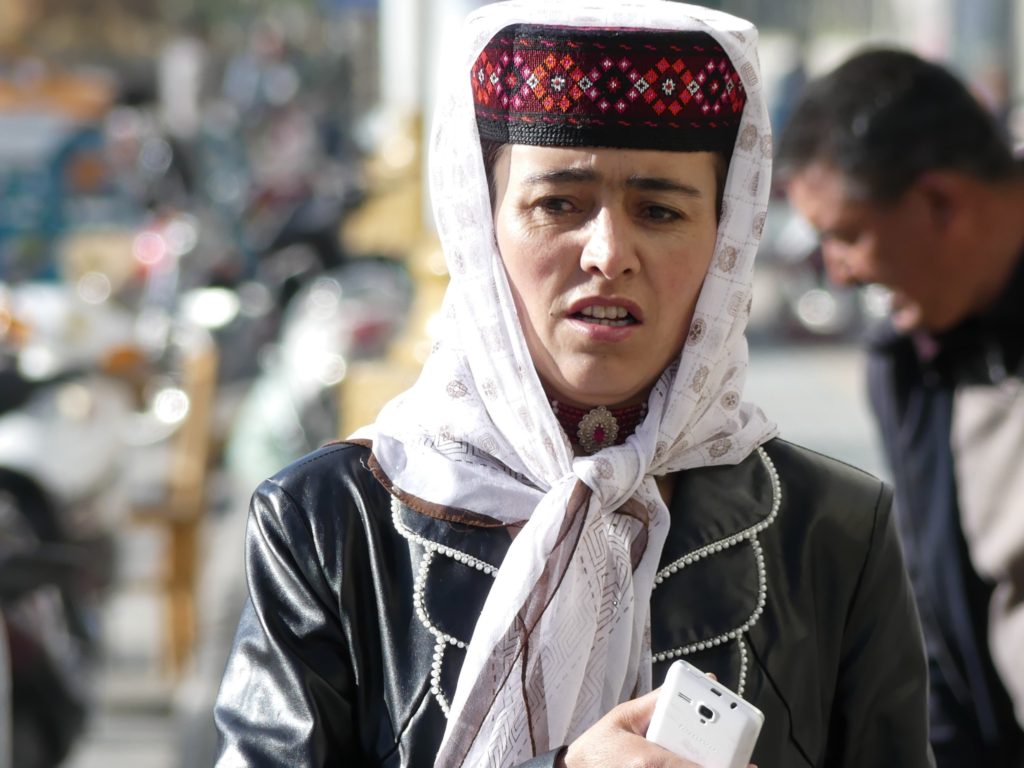 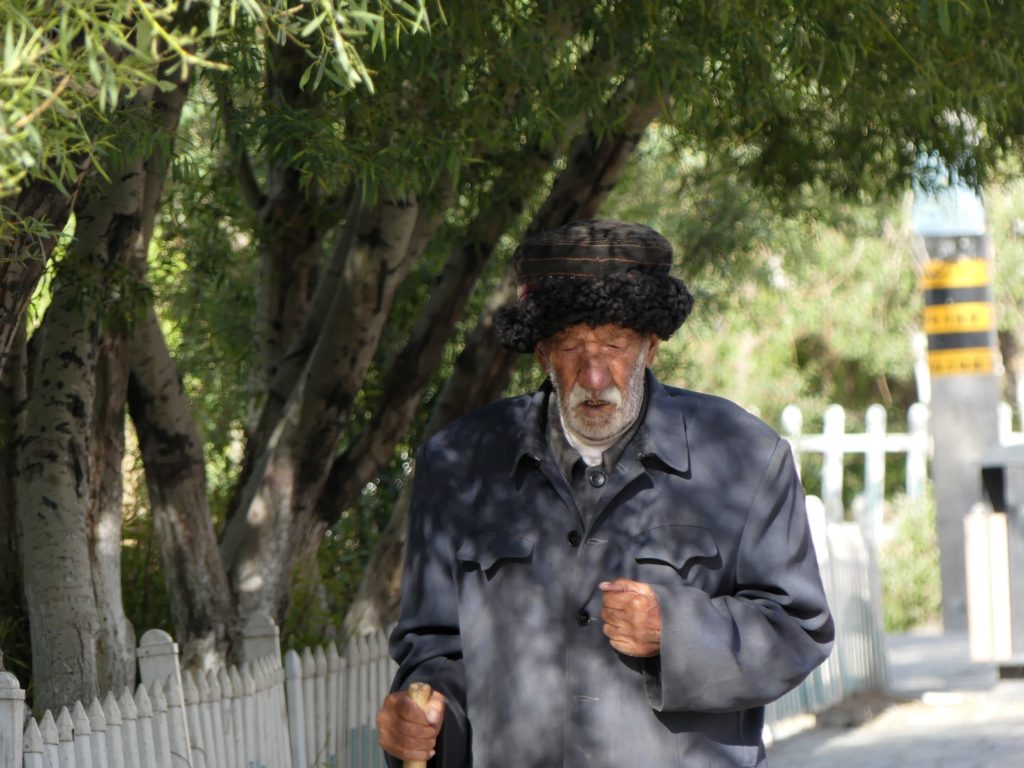 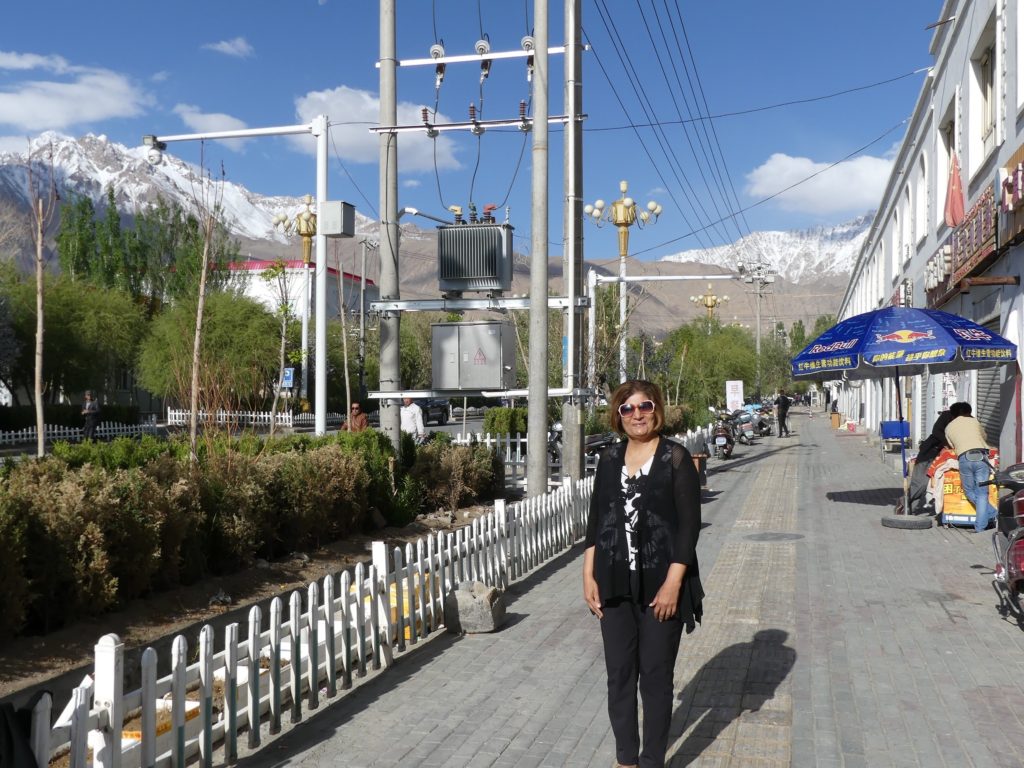 Customs/Immigration building opened at about 11AM, we went in and went thru all formalities. Now, though we were still ~150kms from the Pakistani border, we were officially out of China, but in Chinese territory. So to go outside the building (like to the bathroom), we had to be escorted by a police officer, And NO pictures allowed ☹. Waited in the Immigration hall for our bus to arrive; and walked out to the bus and loaded our bags. The bus had different seating that normal; they had 3 rows of “semi-sleeper” double bunks. There were only Pakistani men waiting to get on this bus (with exception of us, 1 Korean and 1 Chinese); apparently, there are many Pakistanis from Hunza who come to work in Tashkurgan (handicraft or gemstone stores) on Monday, and go back to Pakistan on Friday. 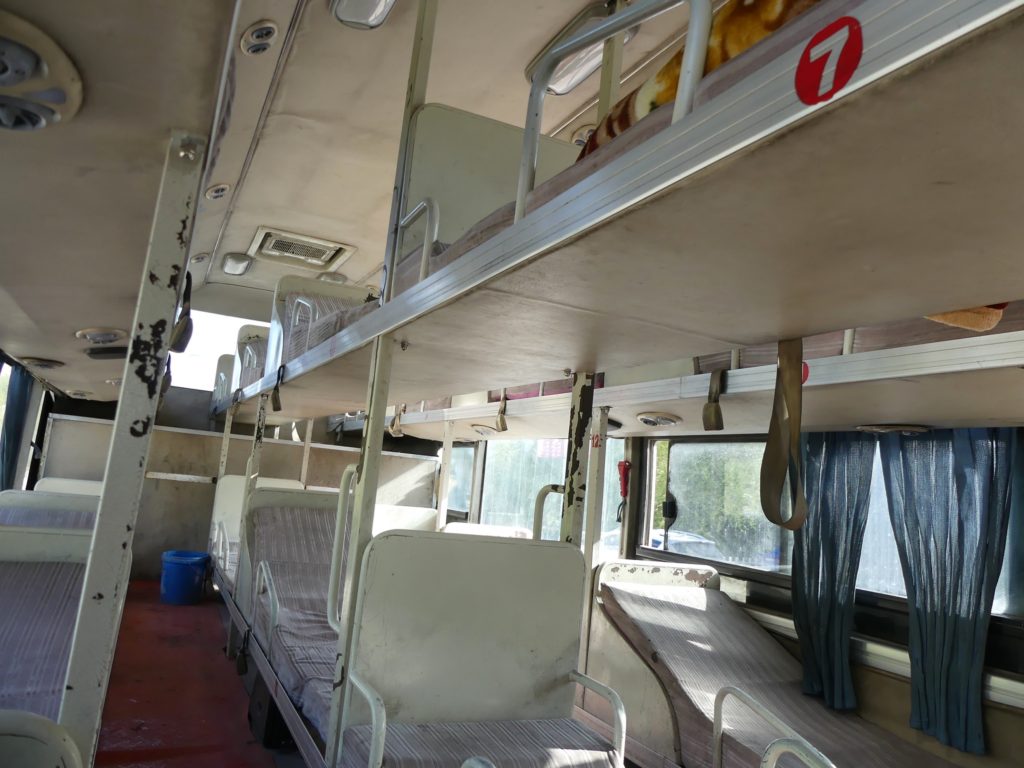 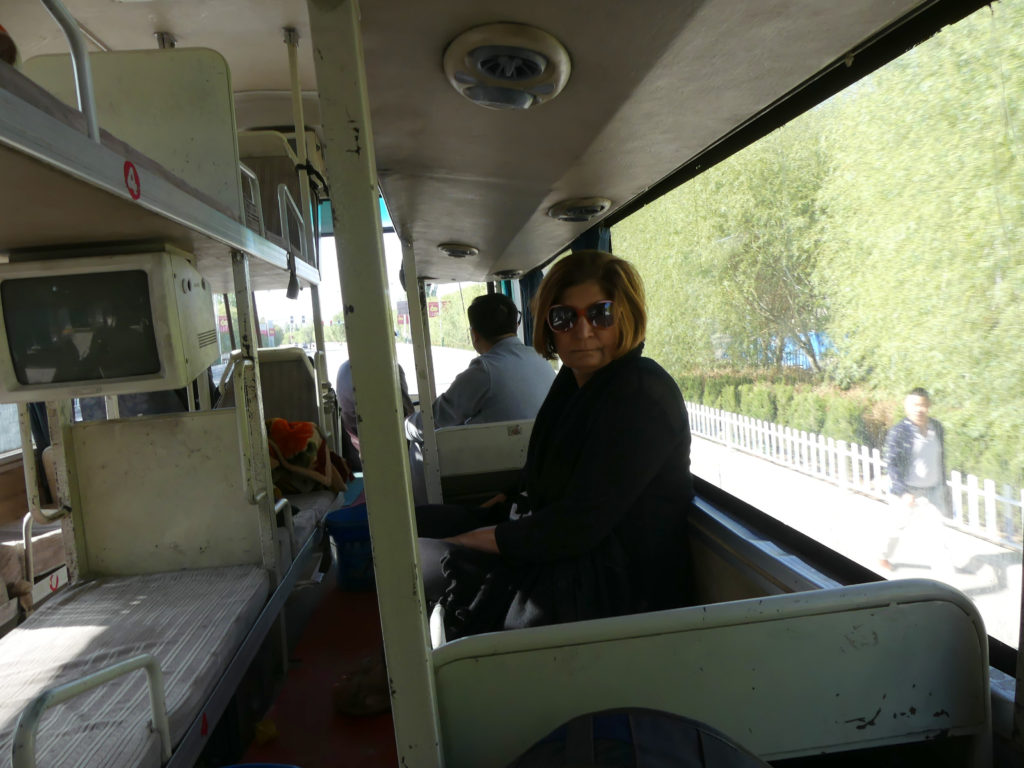 They would not let us board the bus for quite some time, and it was not clear why. There was a lot of “do something, then wait”, with no clear information of what was happening. After checking passports yet again, they finally let us board, Bus took off finally after 1PM.

Dilshad was the only woman on the bus, but the passengers were all very nice and made her feel comfortable. Problem on the bus was many passengers smoked including the drivers. Since we had officially “exited” China but were still in China, we had to be accompanied by an armed Chinese soldier, who also smoked.

There were several police checkpoints along the way, where our ID’s were checked again; sometimes on the bus, and sometimes we had to get off the bus, get ID’s checked, and then re-board the bus. No clear protocol. Bathroom breaks were jungle bathroom breaks; the Chinese army/police posts did not provide any bathroom facilities, and were in general, not friendly. Since this area is close to the Tajikistan, Afghanistan, Kyrgyzstan,  and Pakistan borders, and so the Chinese army presence was there, even though they kept a low key. The road was sparsely populated, with simple basic homes along the way; mostly yak, goat and sheep rearing, with some crops grown for food where irrigated. We were informed all these areas were populated by Mountain Tajik Ismailis. 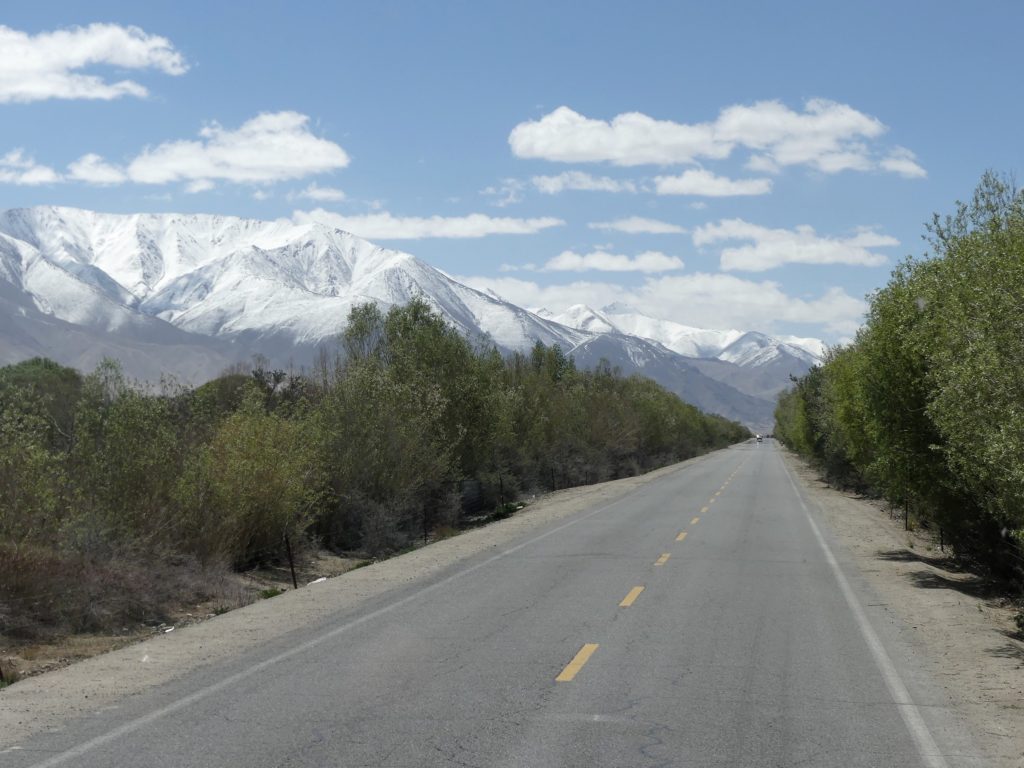 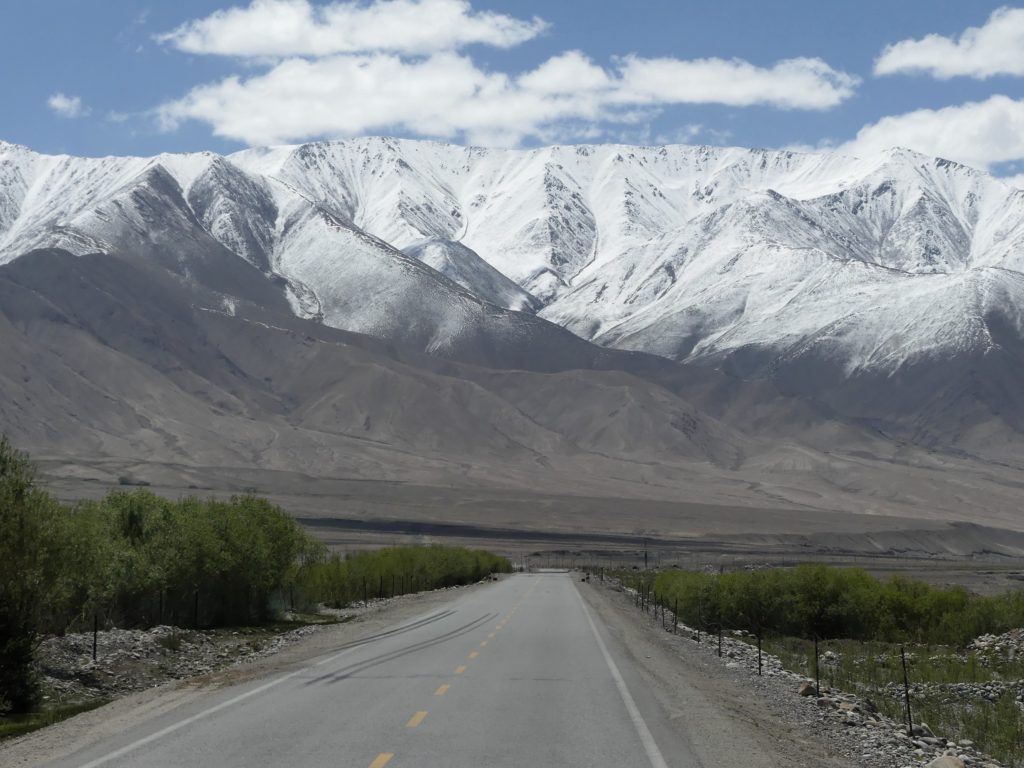 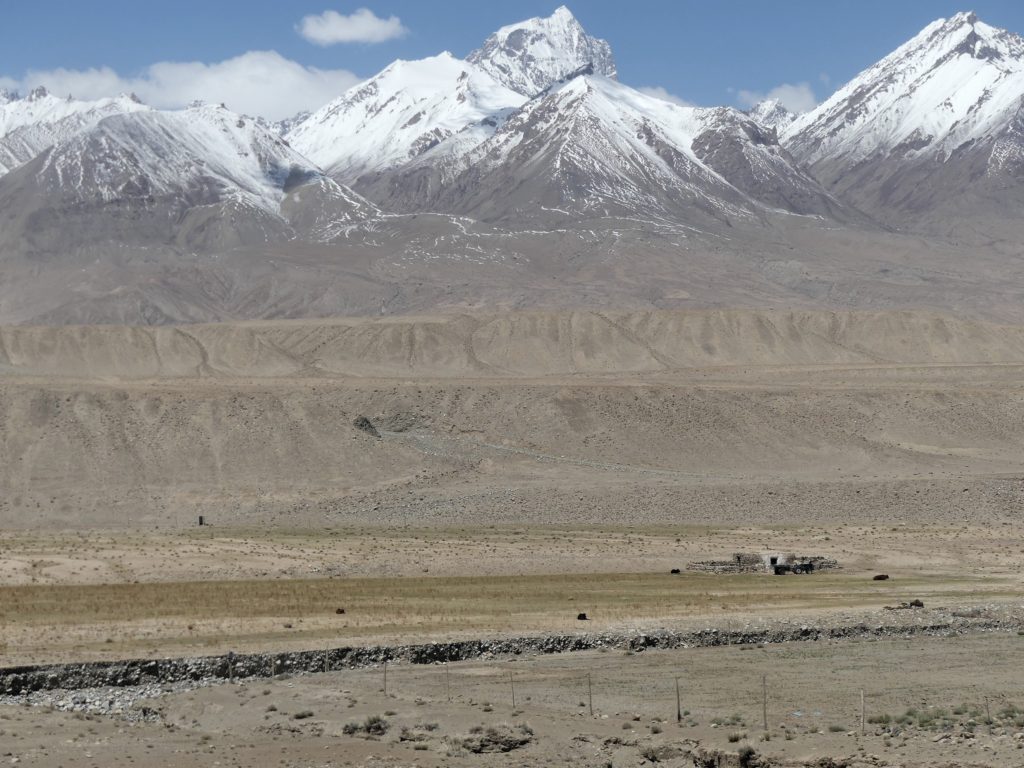 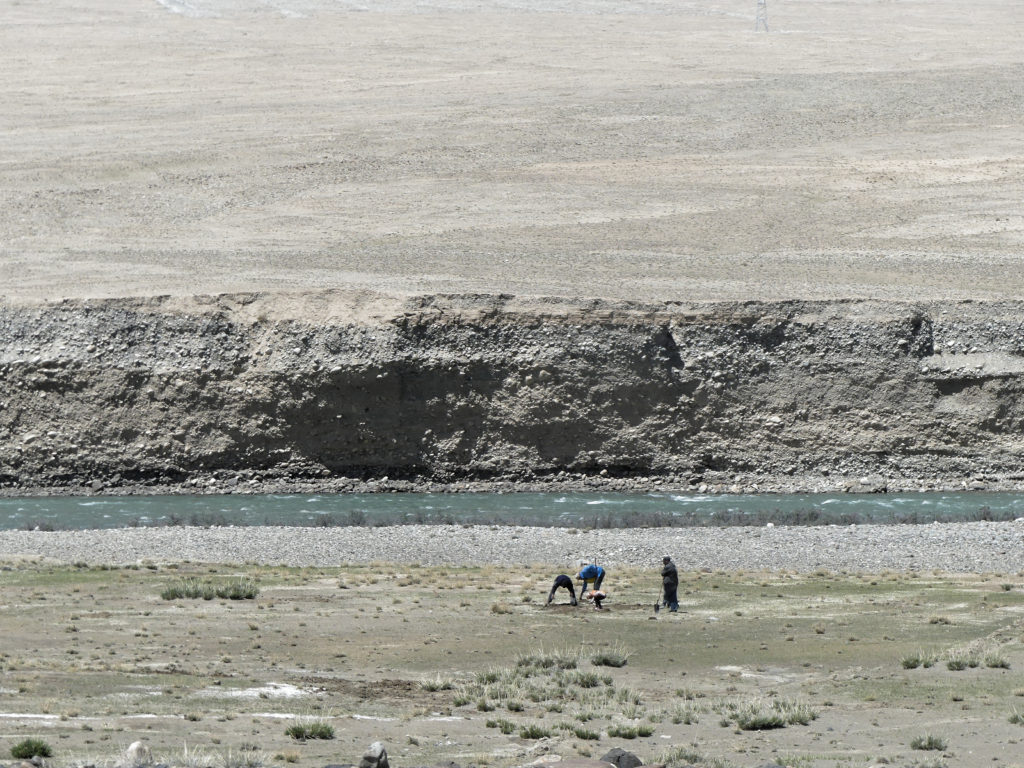 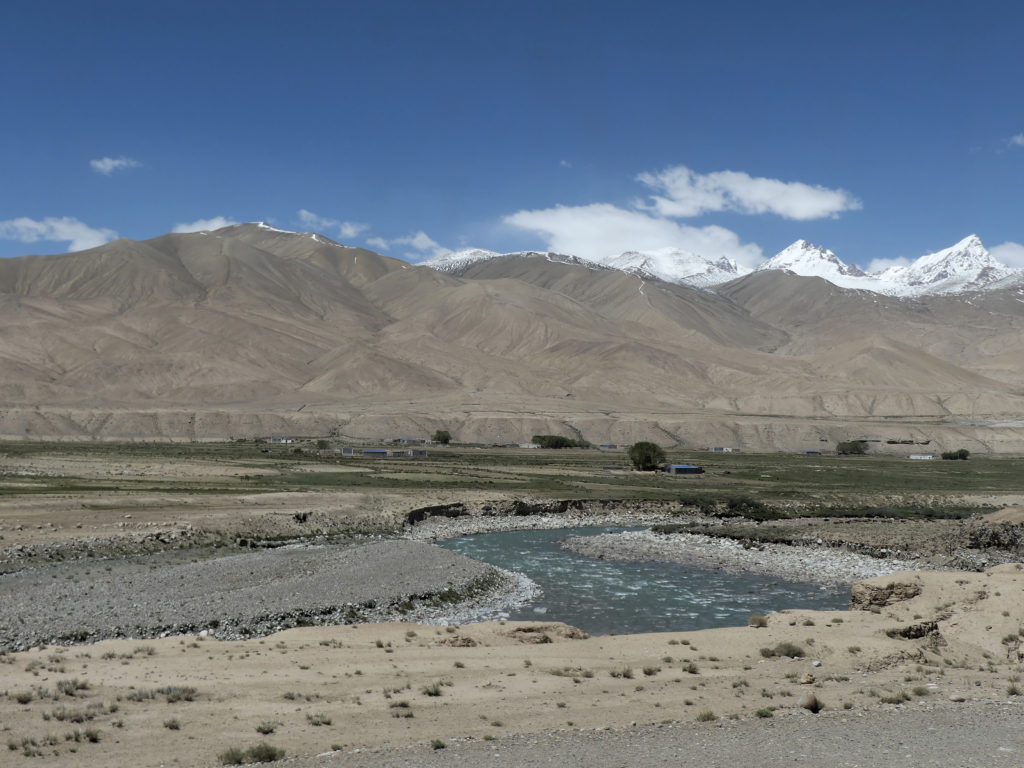 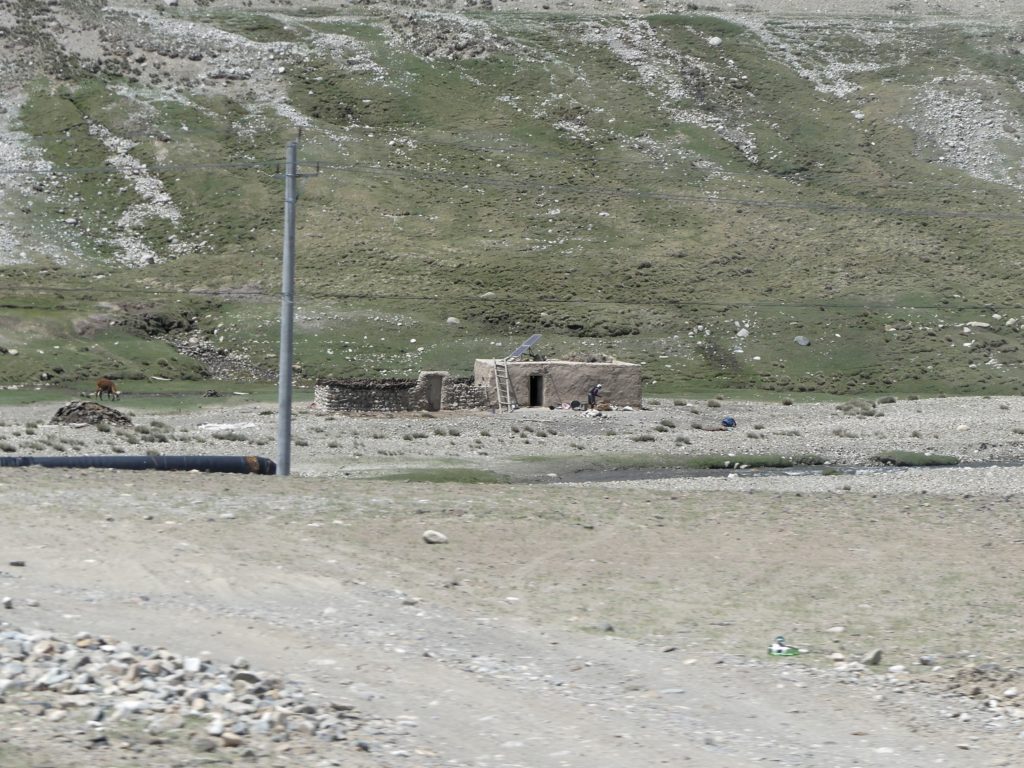 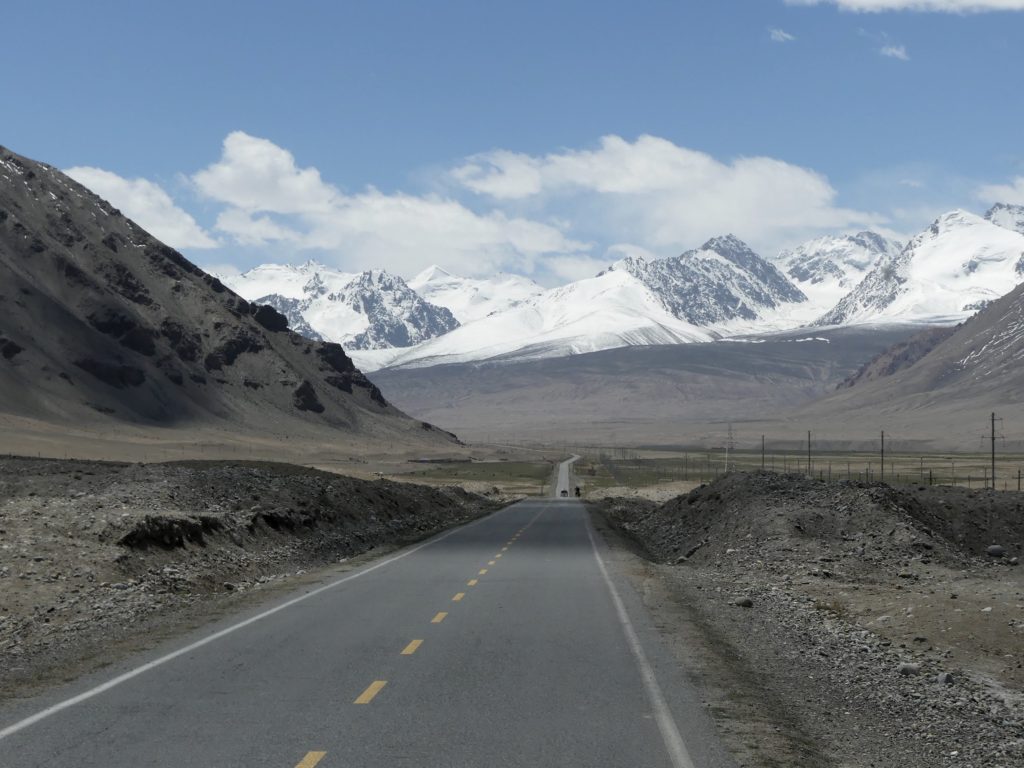 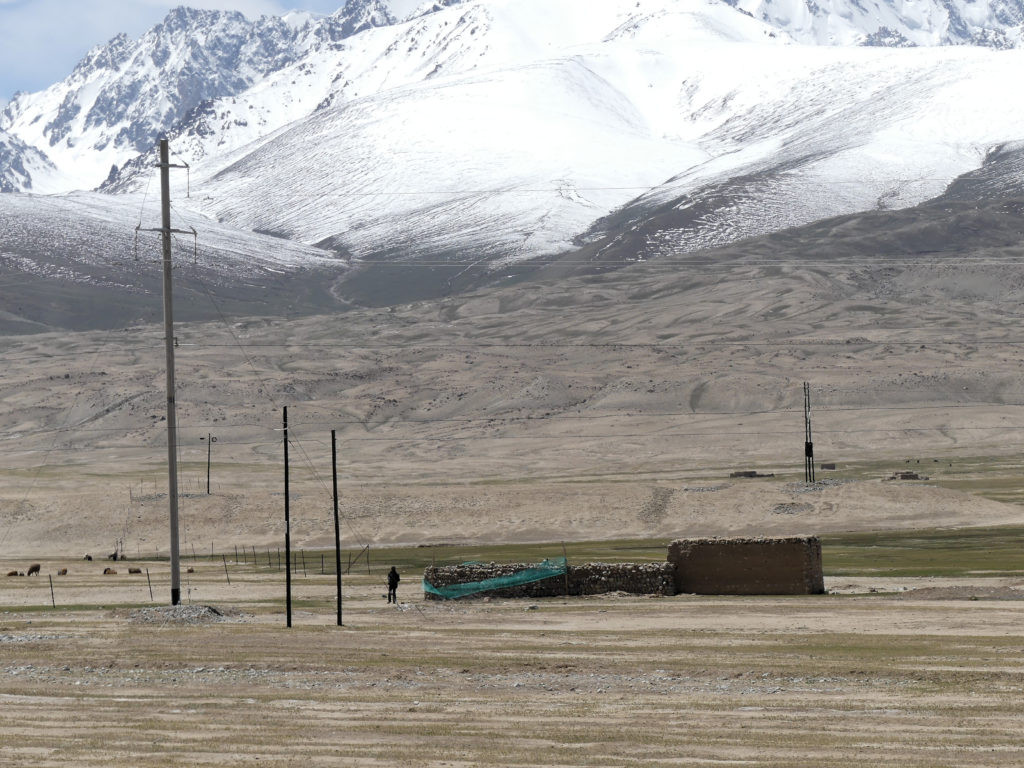 Home and stone-fenced yard for animals 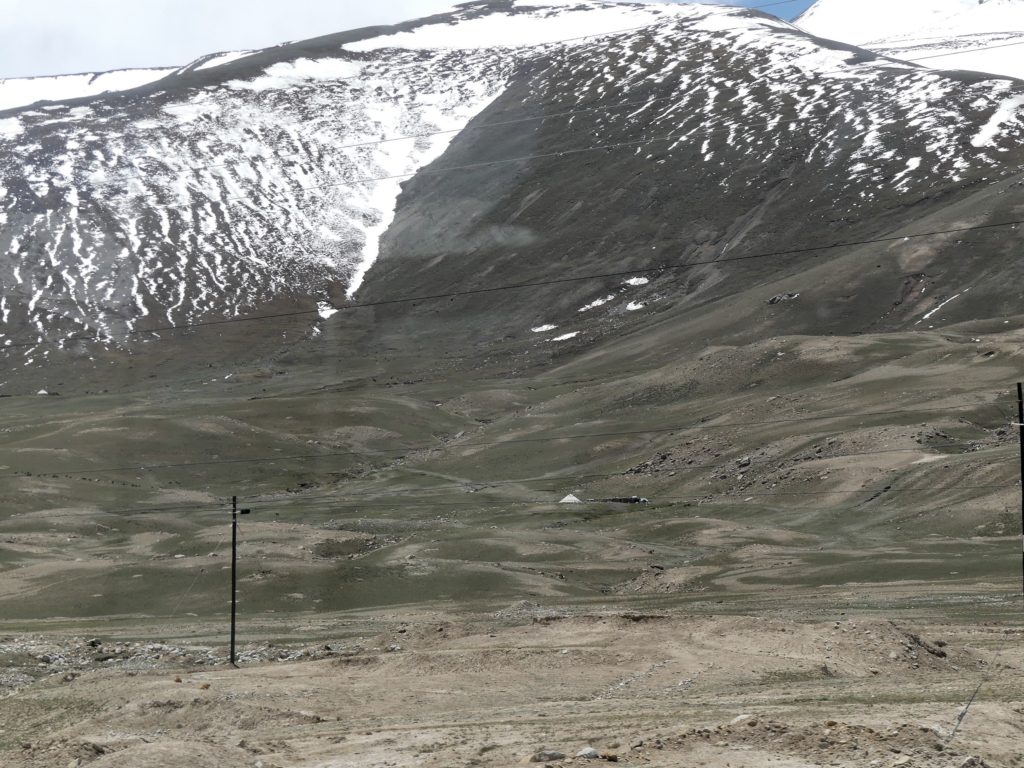 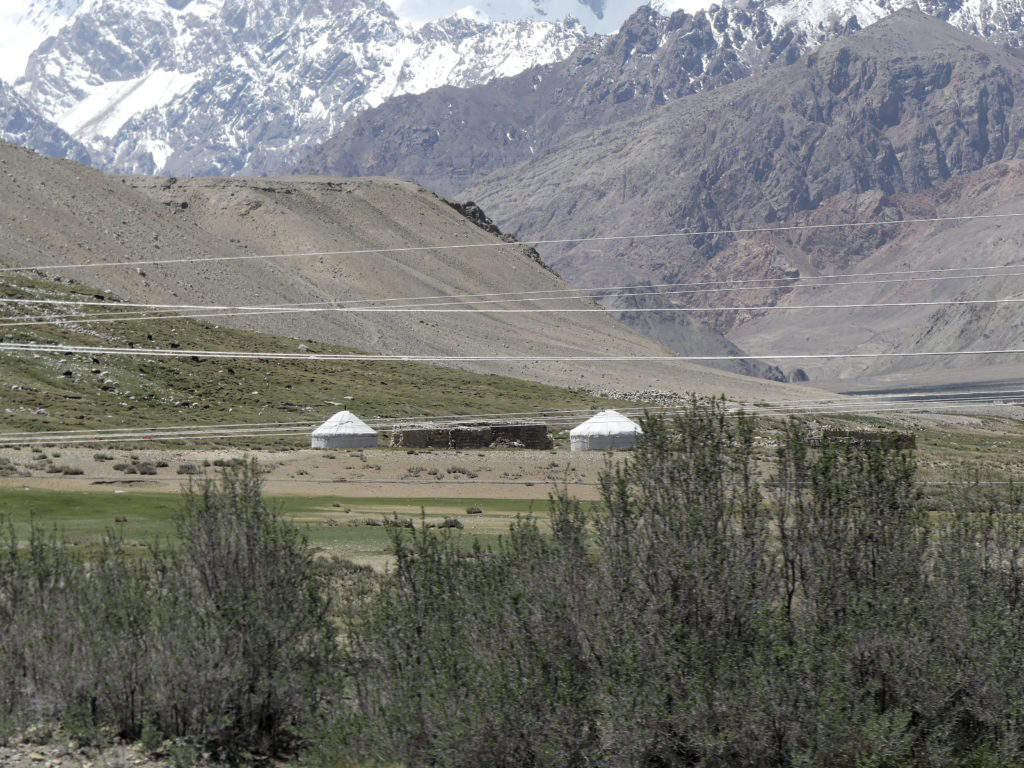 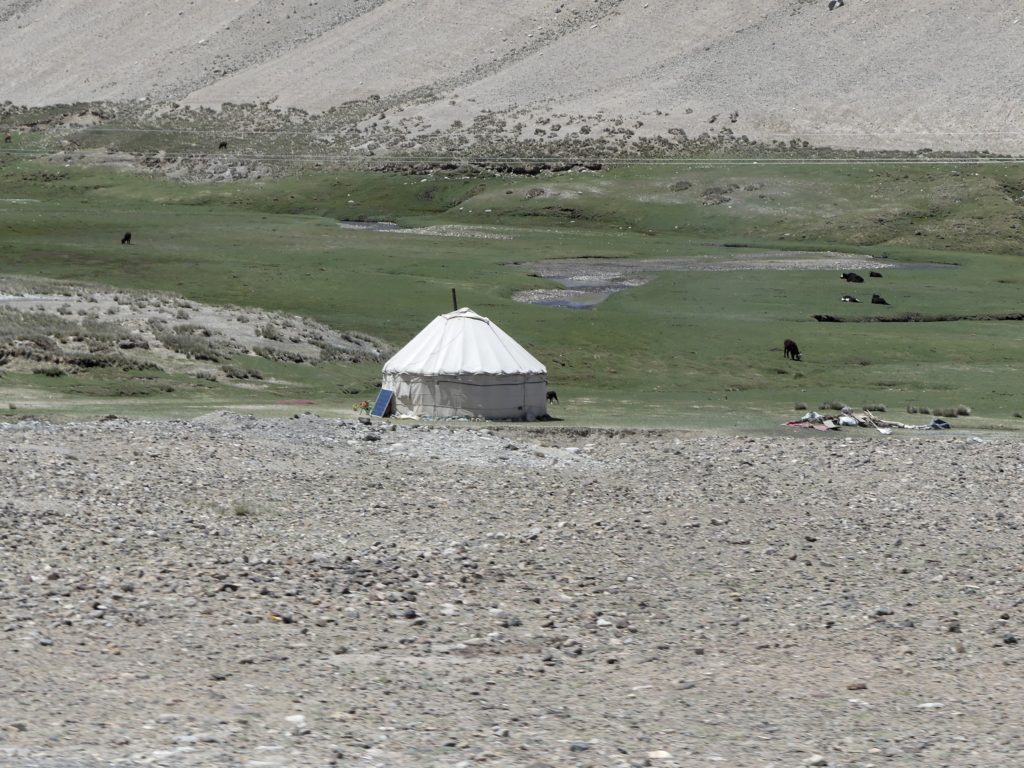 Yurts with solar power panels, animals in the back in a meadow 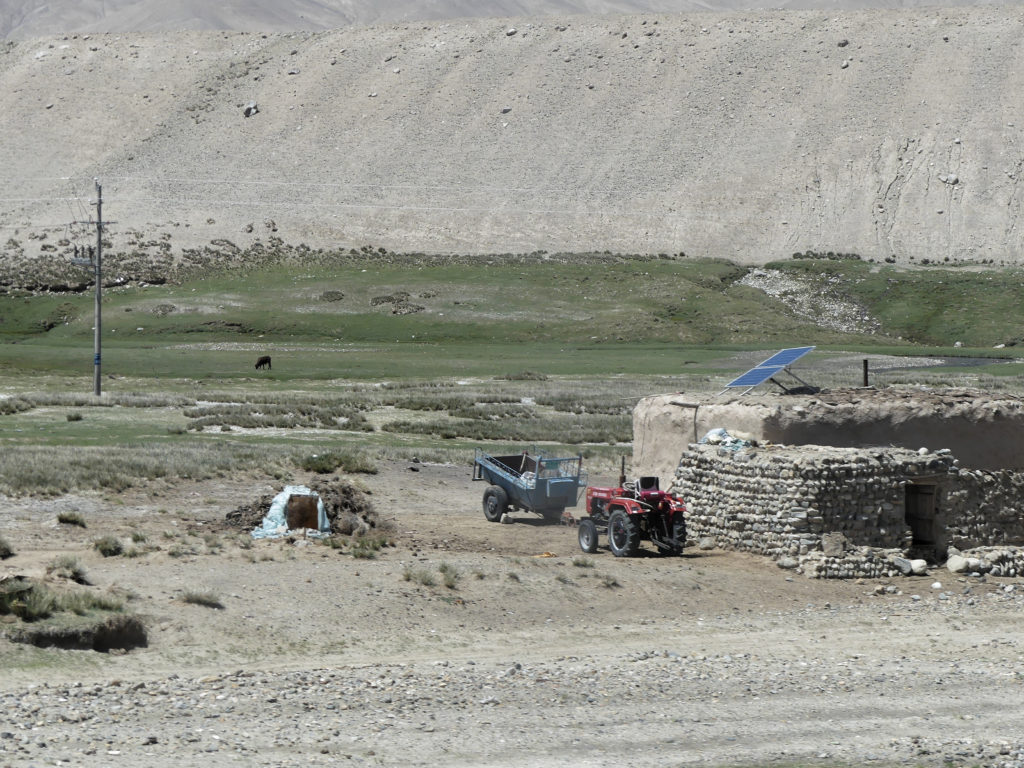 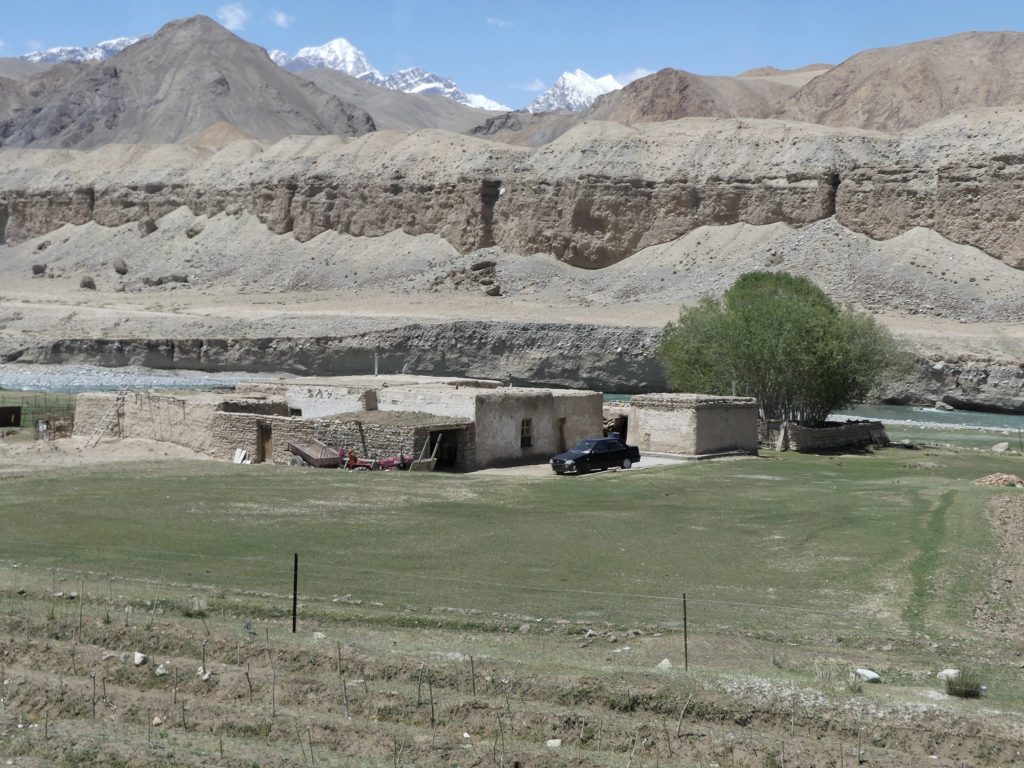 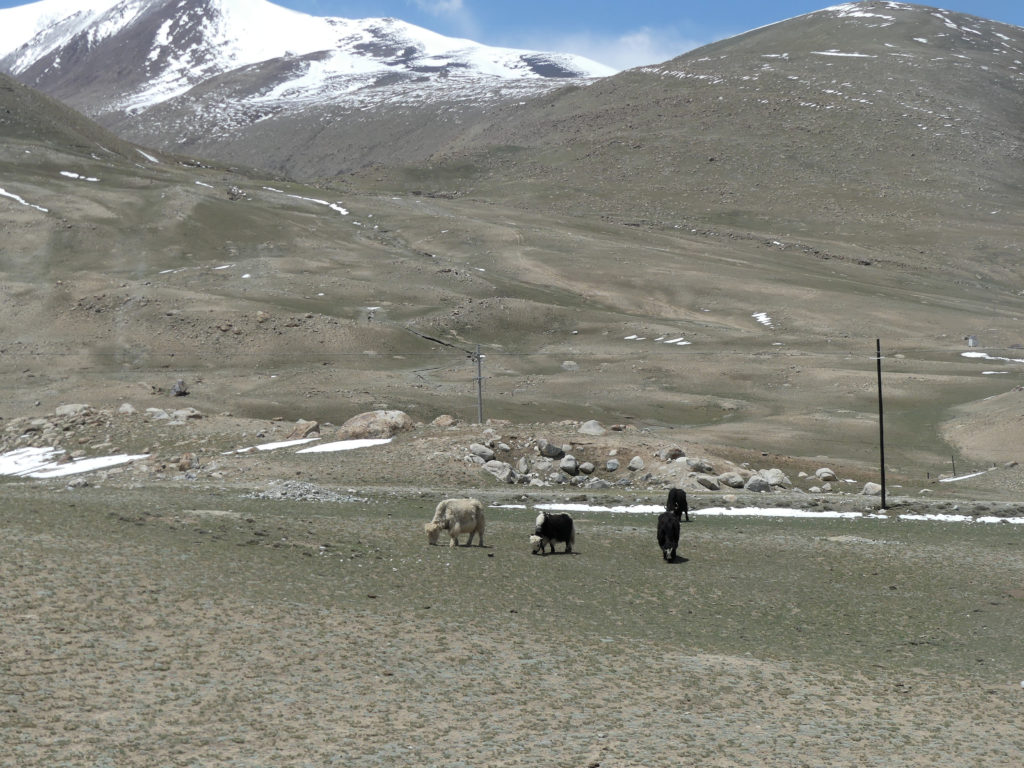 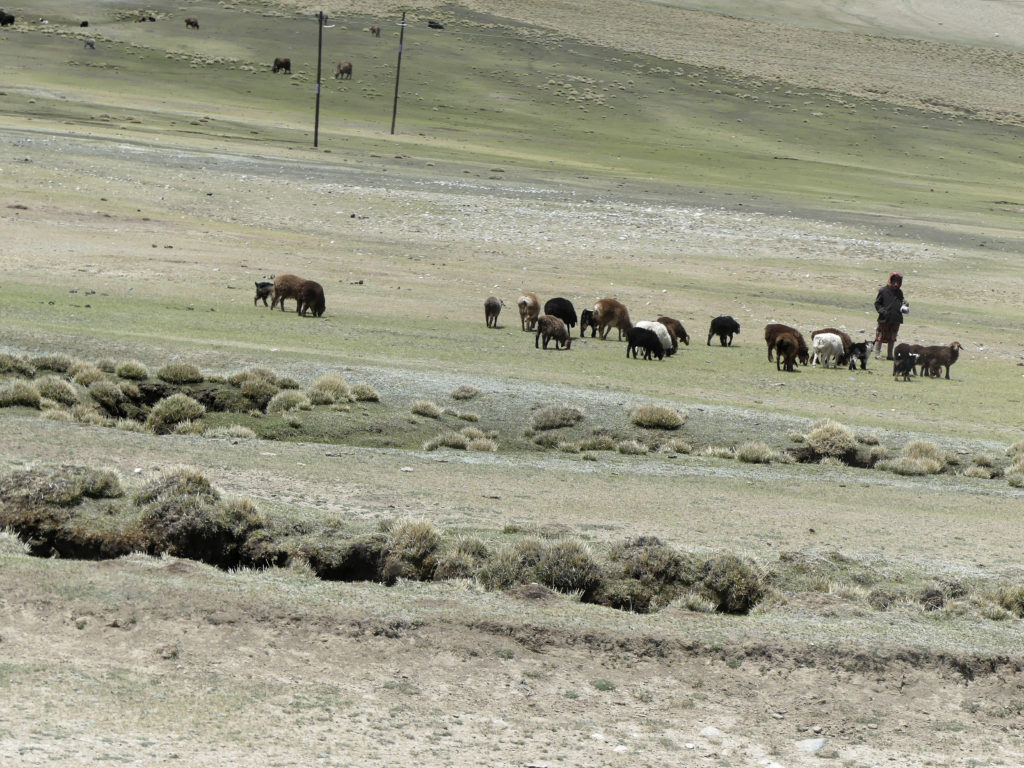 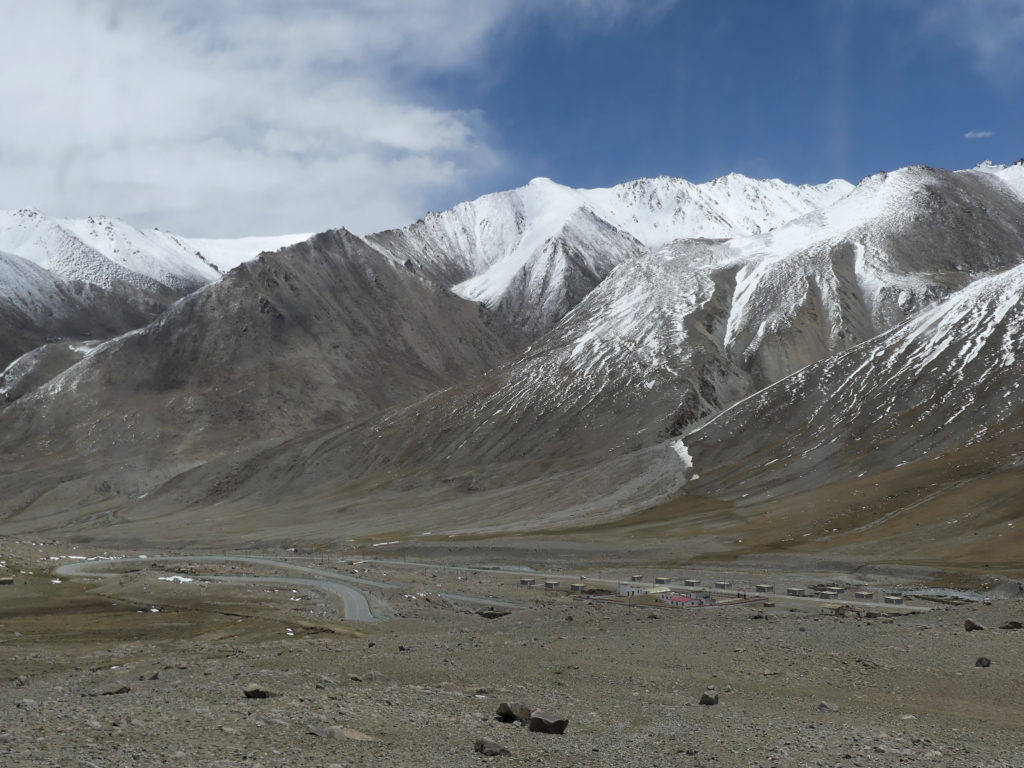 Khunjerab Pass is about 4,800m+ (16,000+ft), the highest border crossing in the world,and KKH is the highest paved road in the world. This was the Silk Road crossing to China from the Indian subcontinent (Buddhism and spices made their way this way). This has to be the highest altitude in the world we have ever been to. At the crossing, the bus simply drove into Pakistan, changed from driving on the right to driving on the left, and stopped on the Pakistani side for a jungle bathroom/photo break. No stopping for Customs/Immigration formalities; those are done in Tashkurgan, China (~150 kms back; and in Sost, Pakistan,. ~120kms forward). The air at Khunjerab Pass was cool, but not cold. We also did not feel the lack of oxygen, but then we were not exerting ourselves either. There was snow all around. Beautiful scenery. 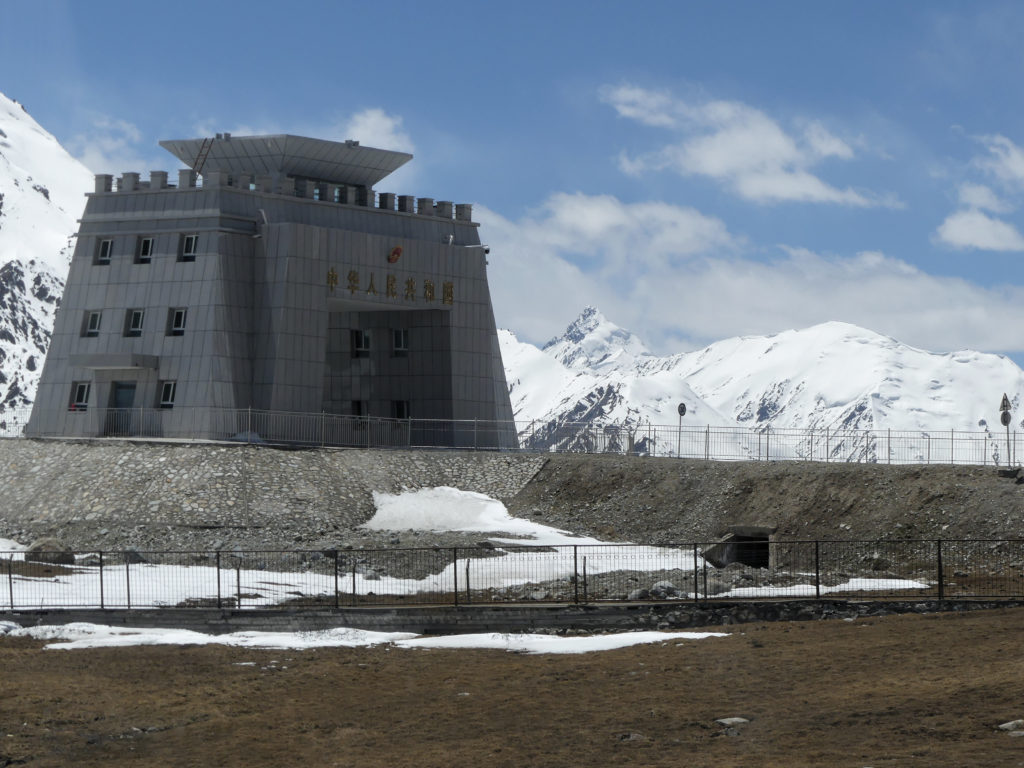 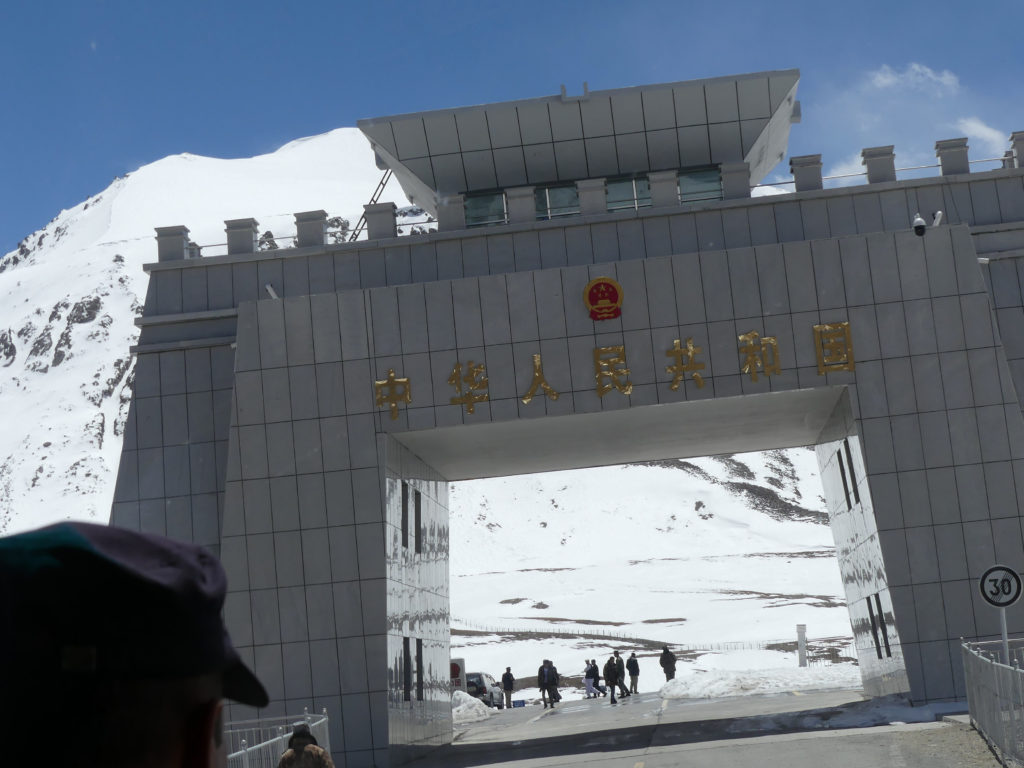 Border between China and Pakistan at Khunjerab Pass; highest border crossing in the world at 16,000ft 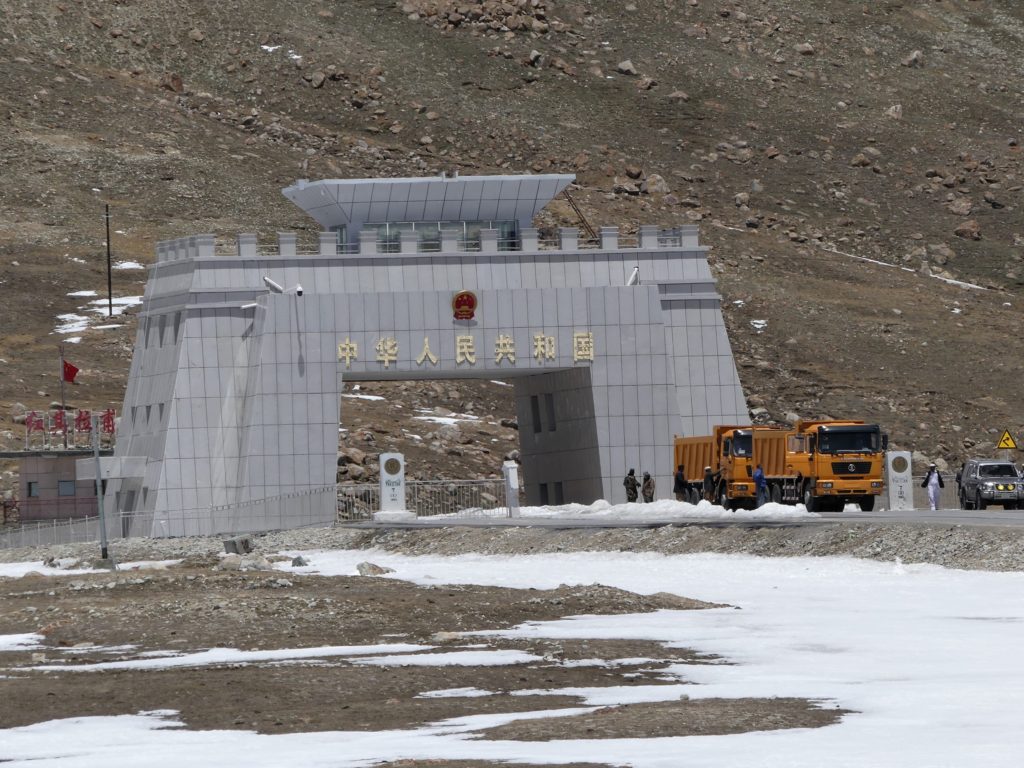 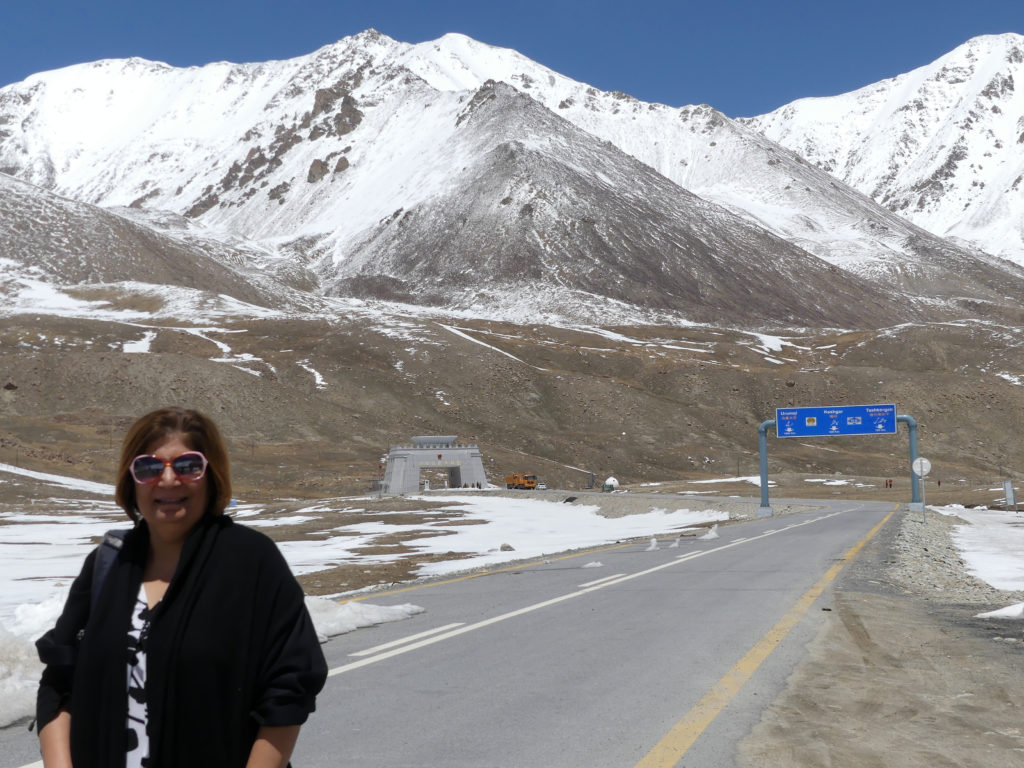 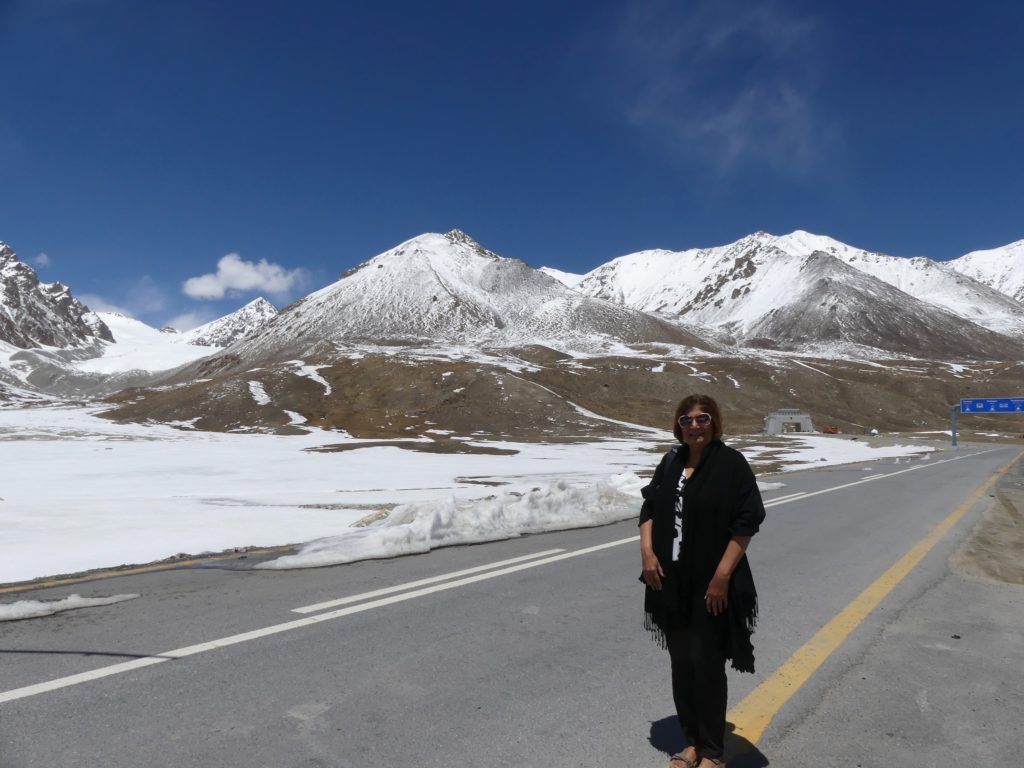 And so ends our wonderful Silk Road journey through Xinjiang province, China. We thoroughly enjoyed this portion of our journey with very hospitable Uyghur people, culture, and great scenery.

Next, our journey continues on the Silk Road, Hunza, Northern Pakistan.

Have you ever considered about adding a little bit more than just your articles? I mean, what you say is important and all. However imagine if you added some great graphics or videos to give your posts more, “pop”! Your content is excellent but with pics and videos, this site could certainly be one of the best in its field. Amazing blog!