Train station in Urumqi was very busy with hundreds of travelers using trains. The train to Turpan was a high speed train, and was punctual. Very comfortable seating and very smooth ride at over 200kph.  The landscape from Urumqi to Turpan was absolutely bleak brown desert, with not a single blade of grass except in oasis areas or where the land was irrigated. There must have been thousands of windmills installed on the fields on this route, providing plenty of green energy. Smart. Turpan is one of the major stops of Silk Road Caravans in China, so well worth a visit. 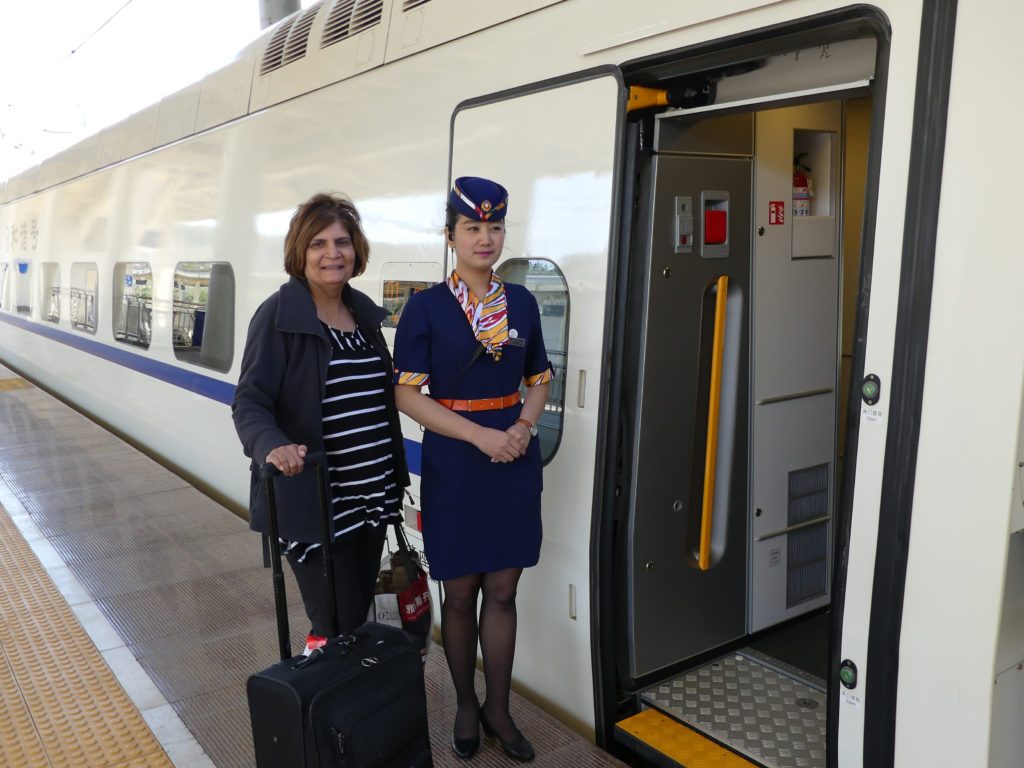 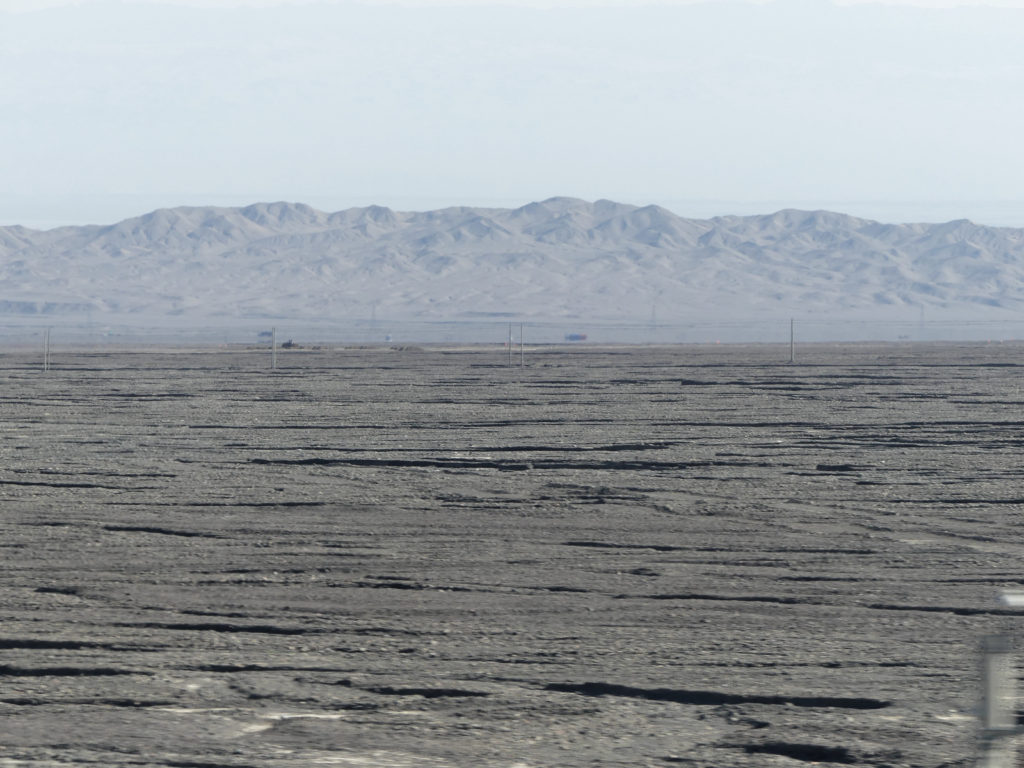 Bleak barren landscape along the train ride; not a single blade of grass visible

Arrived in Turpan, in less than an hour, and took a local taxi with a young Uyghur named Kaiser. Explained where we wanted to go; he made some calls and figured it out. However, he took us to the wrong hotel, and then made some more calls and talked to our hotel who explained where they were located. Finally made it to the hotel.

At the hotel, Raziya the owner, met us and after getting settled, arranged a tour guide for the next day, after some negotiations (always have to bargain J ).  Then went into town with Kaiser, who recommended us a good local Uyghur restaurant and dropped us off at the Bazaar. Walked the busy bazaar with lots of stores selling clothes, bags, food fruits, etc etc. 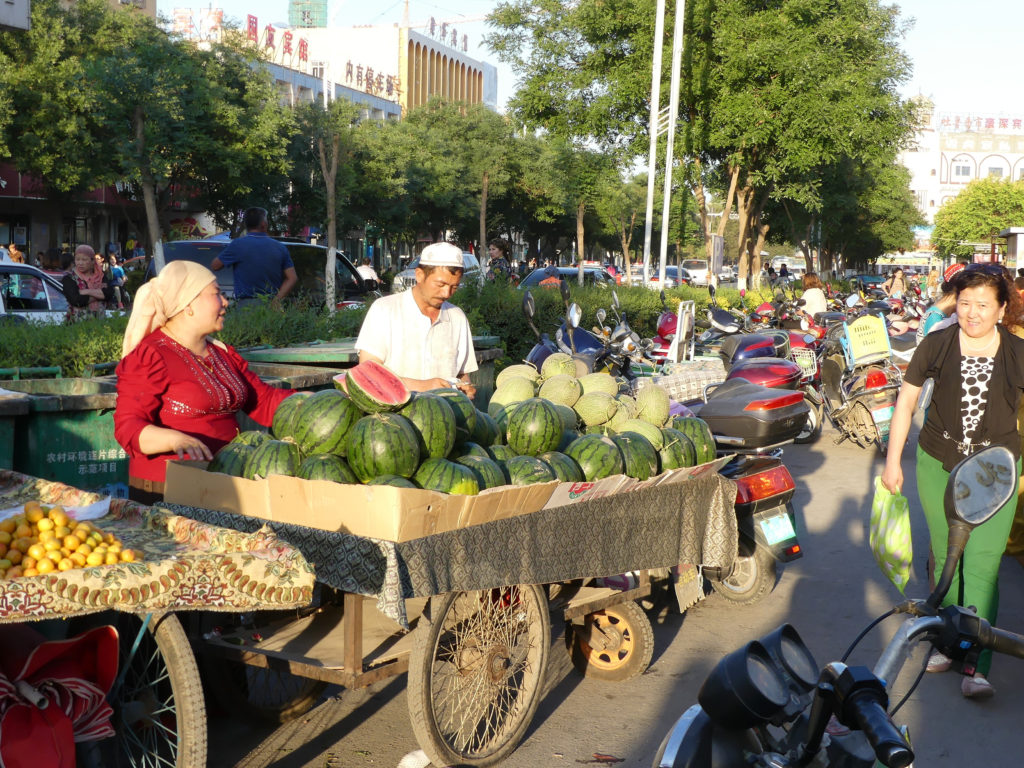 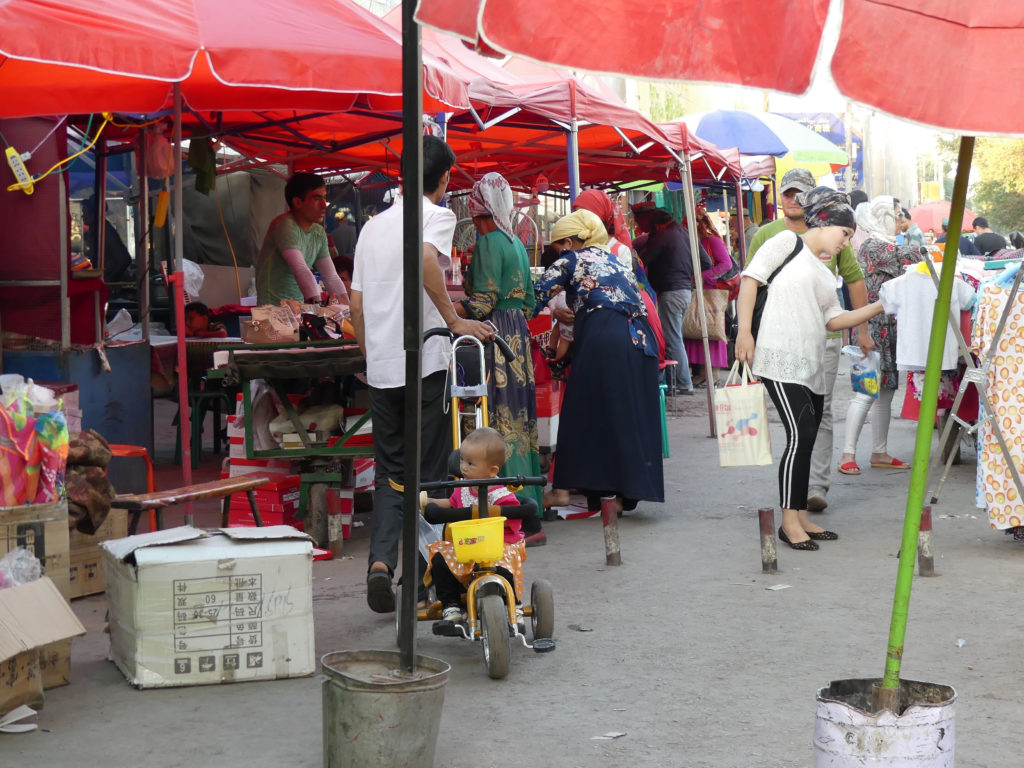 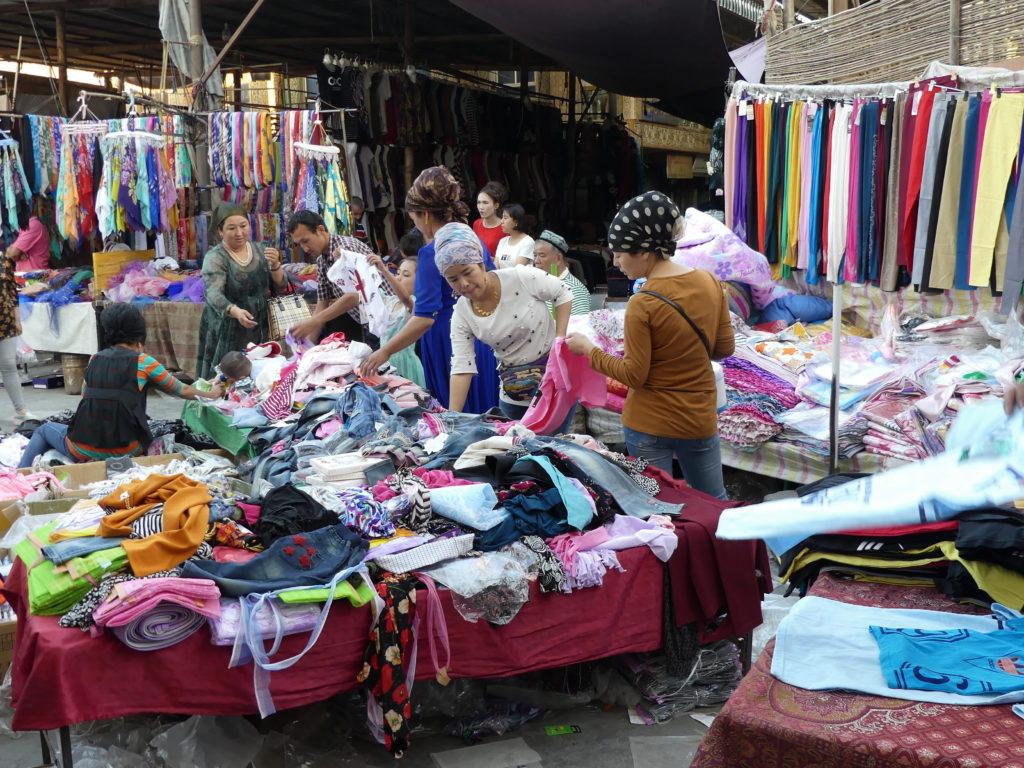 The food night market had just started and had lots of kebab (all lamb, extremely fatty) places were everywhere and were all busy. 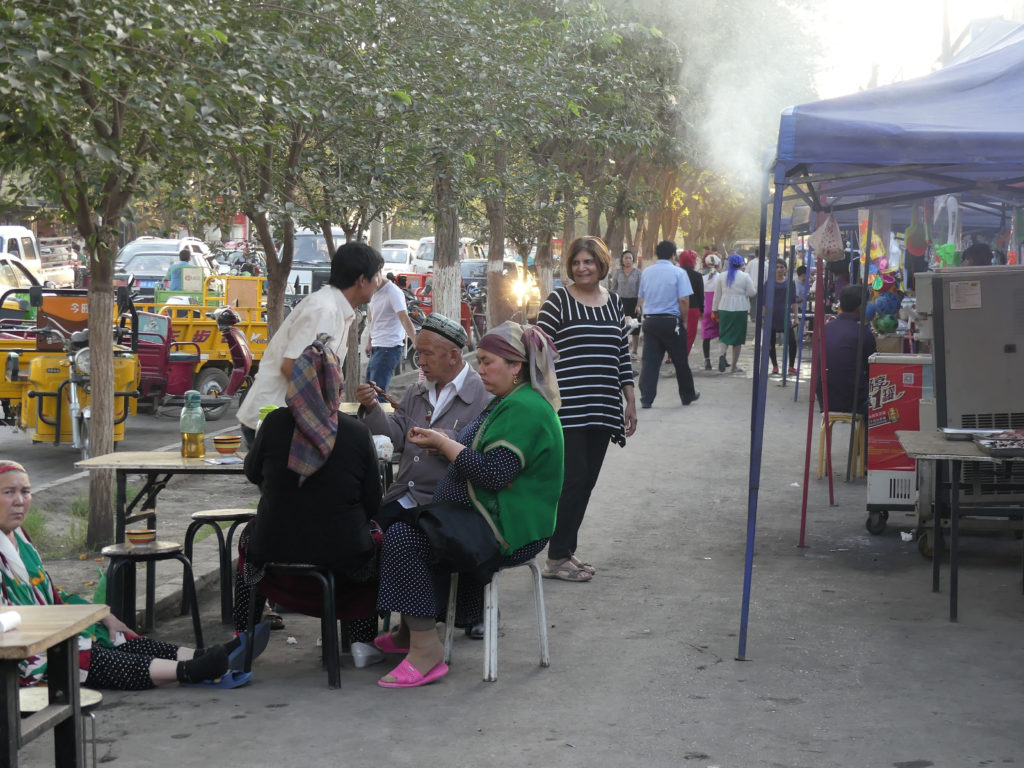 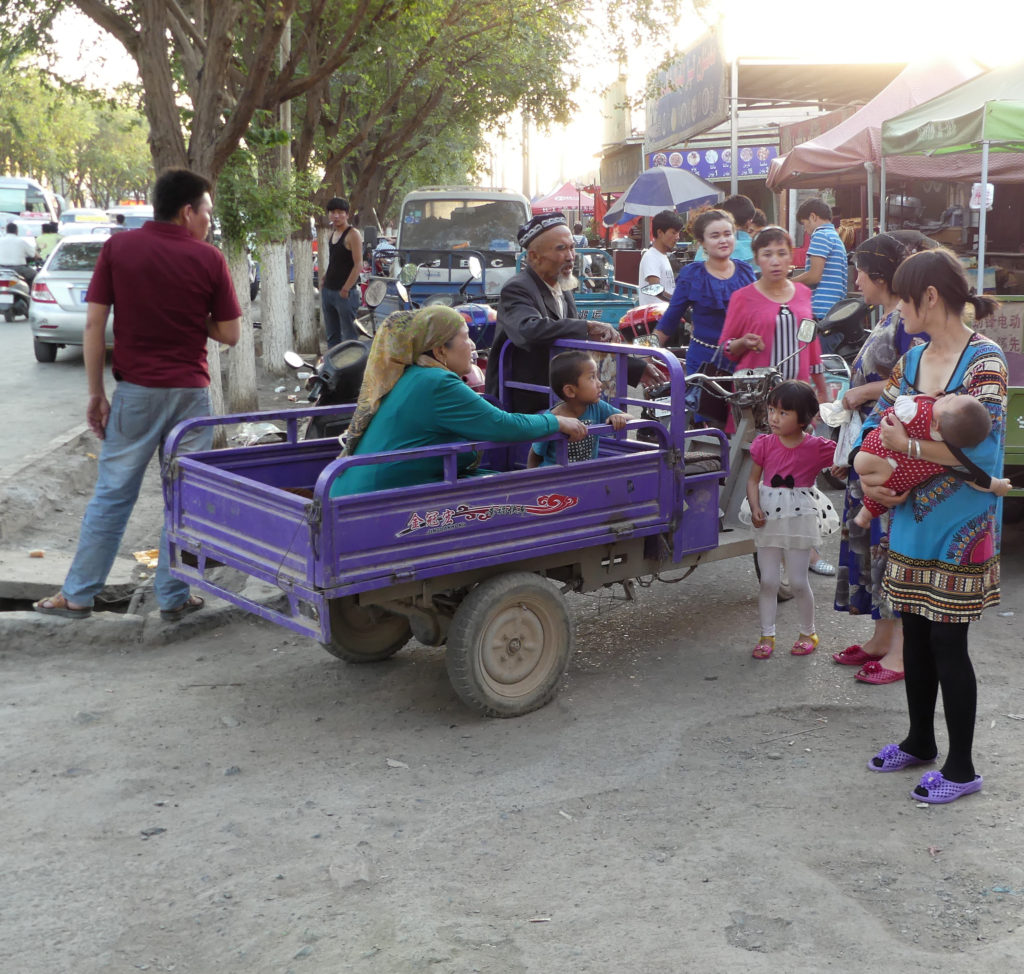 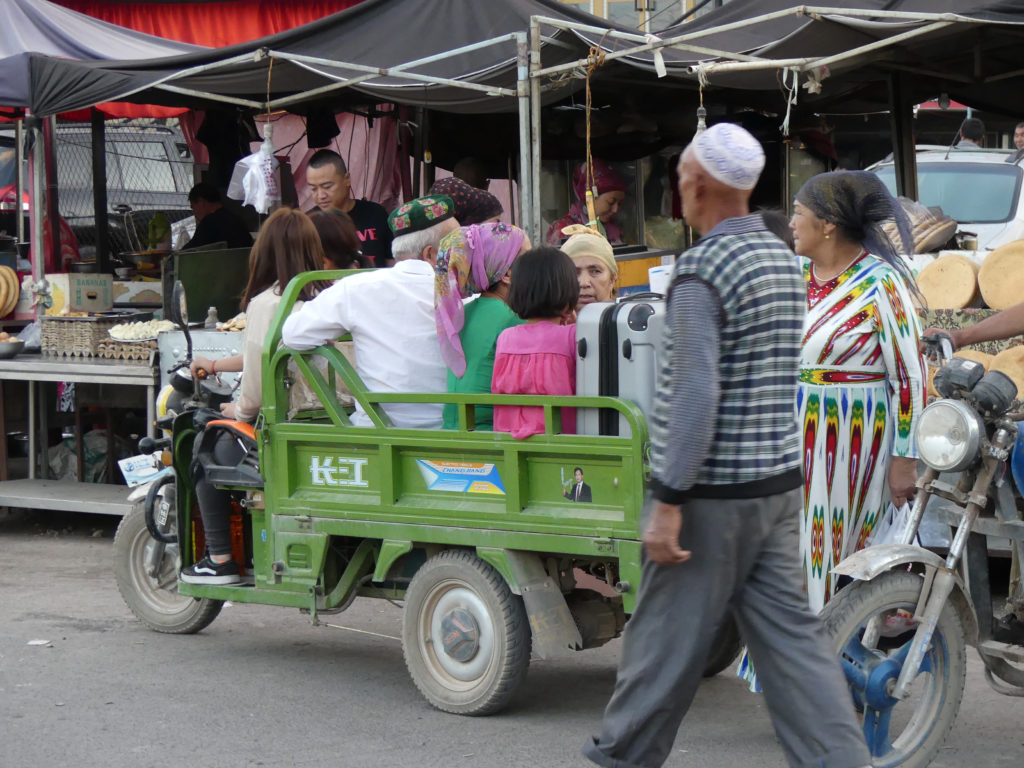 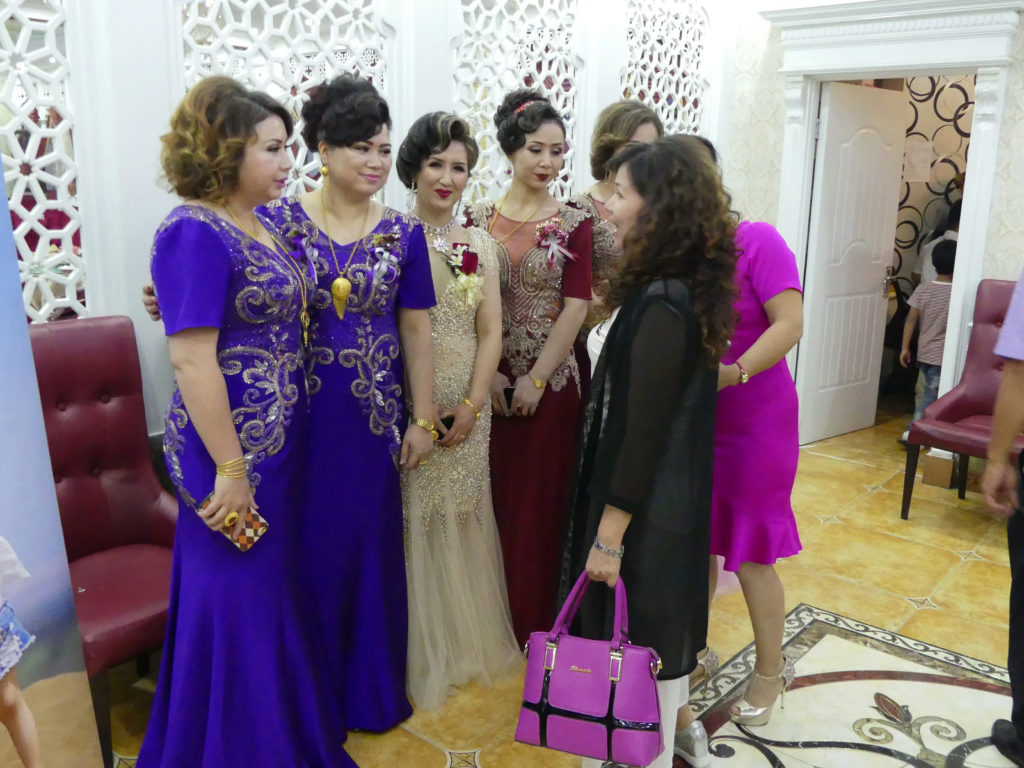 Elegantly dressed women at the restaurant

I asked for a table for 2, and the host quickly whisked us off to a large table with several men, and one of them spoke English. He welcomed us and explained that this was the banquet facility for the restaurant, and this was a private event for a young girl’s 6th birthday party; and they insisted we stay and eat and party with them :). How nice & kind of them.

The men were all sitting with other men, and the women (beautifully dressed and dolled up) were sitting in the same room, but with other women and children. Apparently, in Uyghur culture, boys get circumcised when they reach 6-7yrs of age and families will throw a big party. Girls also get a big party at age 6, so as not to be left out :). In this hall, there were at least 300+ people, and they had live Uyghur music. First, the children all got entertained with dancing and games, loot bags and presents. Then the adult dancing started. I was surprised to see that men danced with men, and women danced with women, all on the same dance floor. Check out the videos below 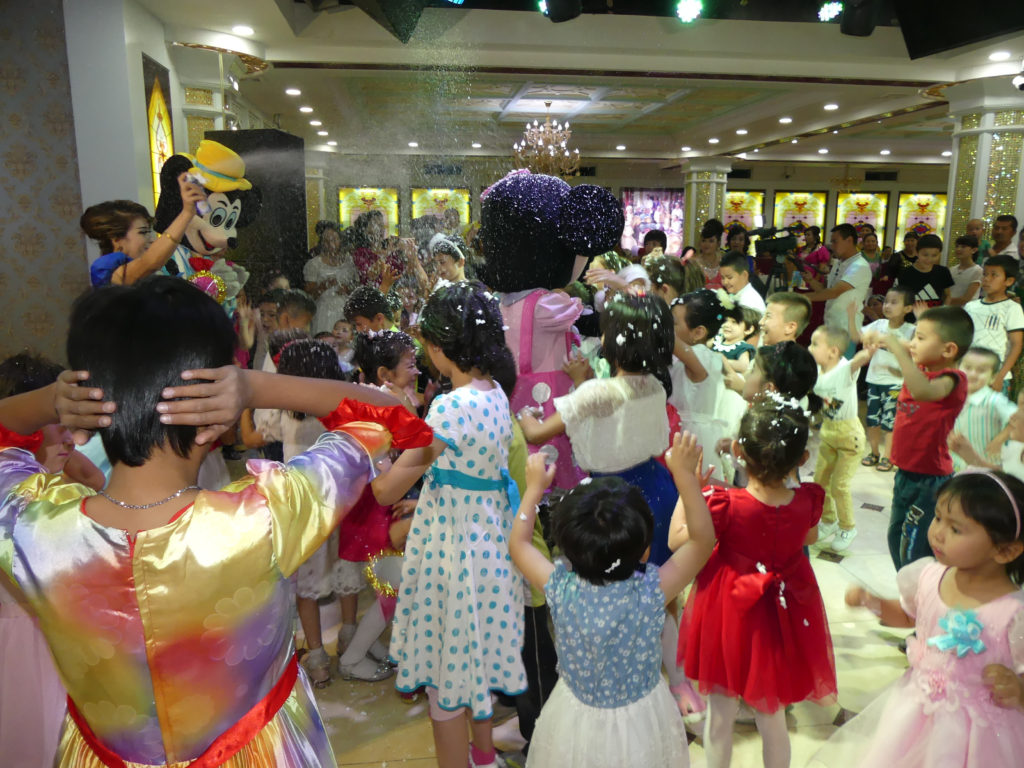 Several of the women (in pairs) were dressed in the same clothes; apparently, it is quite common for sisters or close friends to wear the same outfits to parties. Most women I know would die if there was someone else wearing the same dress at a party 🙂 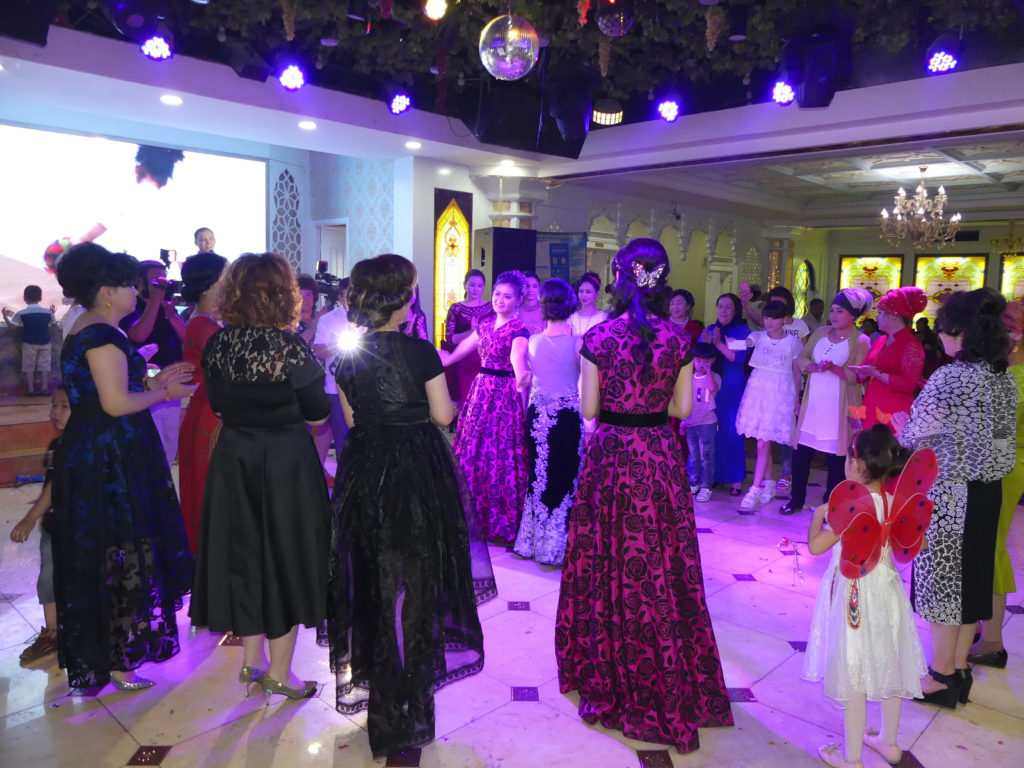 All this while, appetizers were served (dates, dried fruits and may different nuts), and then dinner was served; dinner included lamb, whole masala fish, chicken, pilau, fresh vegetables, pickles, noodles, vegetables etc). Lots of food; in fact too much with plates of food piled on top of each other. 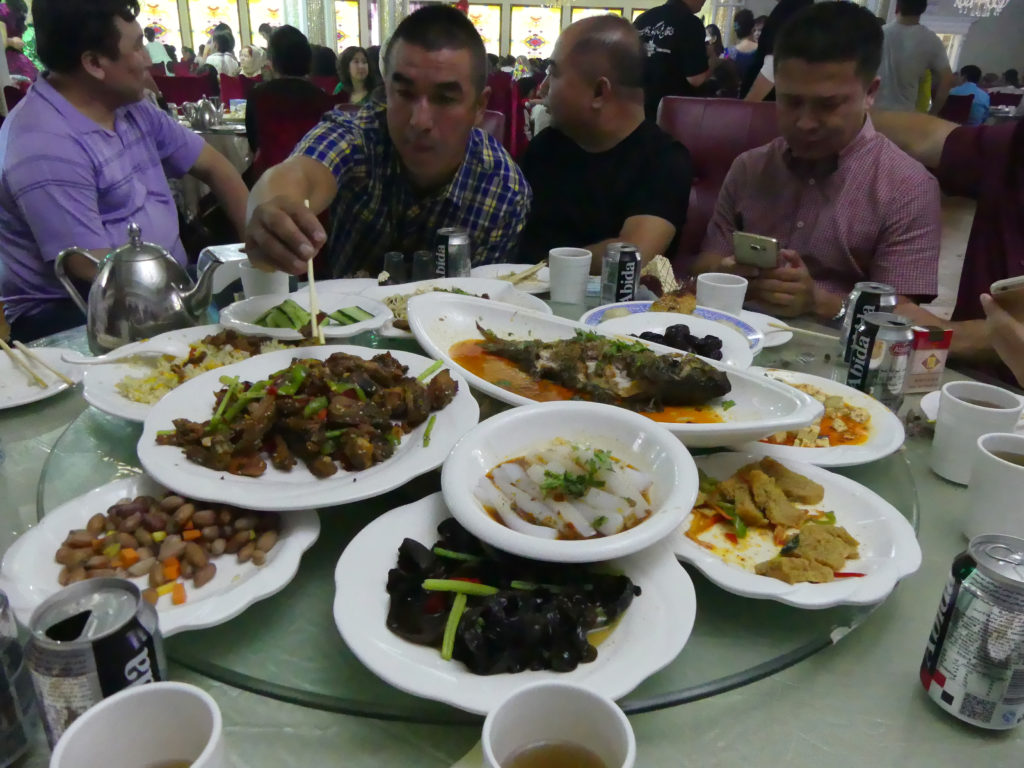 Lots of food at the party

The men at our table were all very nice and explained about their life, culture, business etc.  After dinner at 11PM, we left and the party was slowing down, as it was a school/work day the next day. Very nice evening with most hospitable Uyghurs who did not even know us, total strangers.

Next day sightseeing around the old Silk Road around Turpan 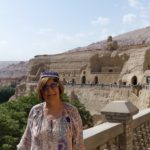 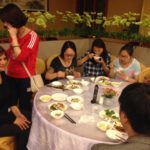 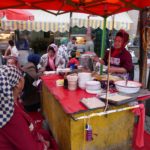 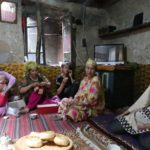