Drove from Dead Sea to Petra; took about 5hrs. Went via Karak castle, which we were told was one of the best-preserved castles in Jordan; it was quite impressively built on top of a tall steep hill. Stopped for a short meal at a small town; schwarma was not good; so decided to have tea and some sweets as there was a nice shop nearby that was selling lots of different Arabic sweets (confectionery).

Ordered 2 pistachio items, and the owner would not take money; told us it was on him, and welcome to Jordan. Another random act of kindness from a total stranger.

Arrived in Musa Wadi, which is the small town next to the Petra ruins, a UNESCO World Heritage Site. By the time we got here, it was dark. So settled in the hotel and got our bearings for the next day.

Next day, went to the Petra site; the cost for entry was very steep (50JD’s per person, or $75/person; other sites in Jordan were only 1-2JD’s). However, this is one of the top 7 man-made wonders of the world (so we were told) and so we had to go.

Petra is a site that was discovered 1800’s, and was built by the Nabateans, and occupied by them in 2nd century BC. The only access to this place is via a deep natural gorge, and so was effectively hidden. The Nabateans lived here and conducted trade with the all the surrounding communities. The main affluence for the Nabateans came from trading Frankincense, of all things. Frankincense was as valuable as gold at that time, due to the fact that frankincense was used in all the religious ceremonies and temples in this area (all monotheistic and non-monotheistic religions).

Once inside the site, you walk about 2 kms through the bottom of a magnificent deep (400-500ft deep, 20-30ft wide) gorge. At the end of this walk, you suddenly come across a large opening (all at the bottom of a 400+ft gorge, but this time, much wider). Inside this opening is the magnificent Treasury building, carved out of the rock by the Nabateans. This is truly amazing, as it is huge and very well preserved. It was originally assumed this was a treasury building, but subsequently it was found this was actually a funerary. Turns out the Nabateans lived in many natural caves in this area (Many local Bedouins near this area actually still live in such caves), conducted their activities of goat herding and trading in frankincense, and strongly believed in the after-life, so their funerary’s and monasteries were lavishly built, and survive till today. 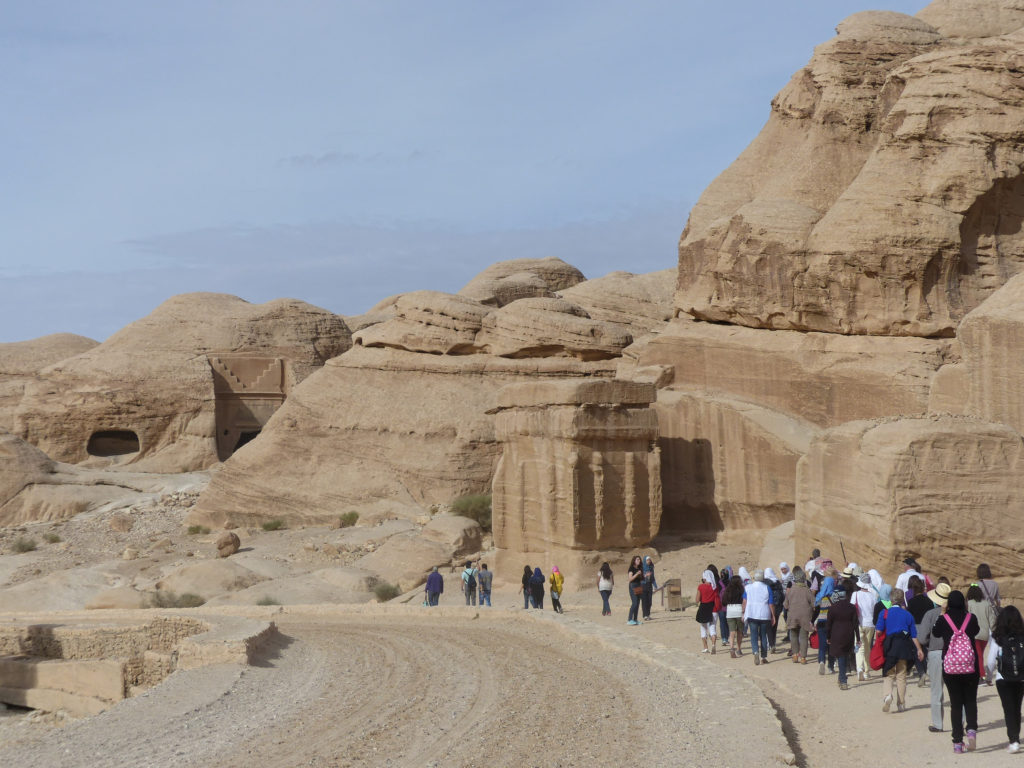 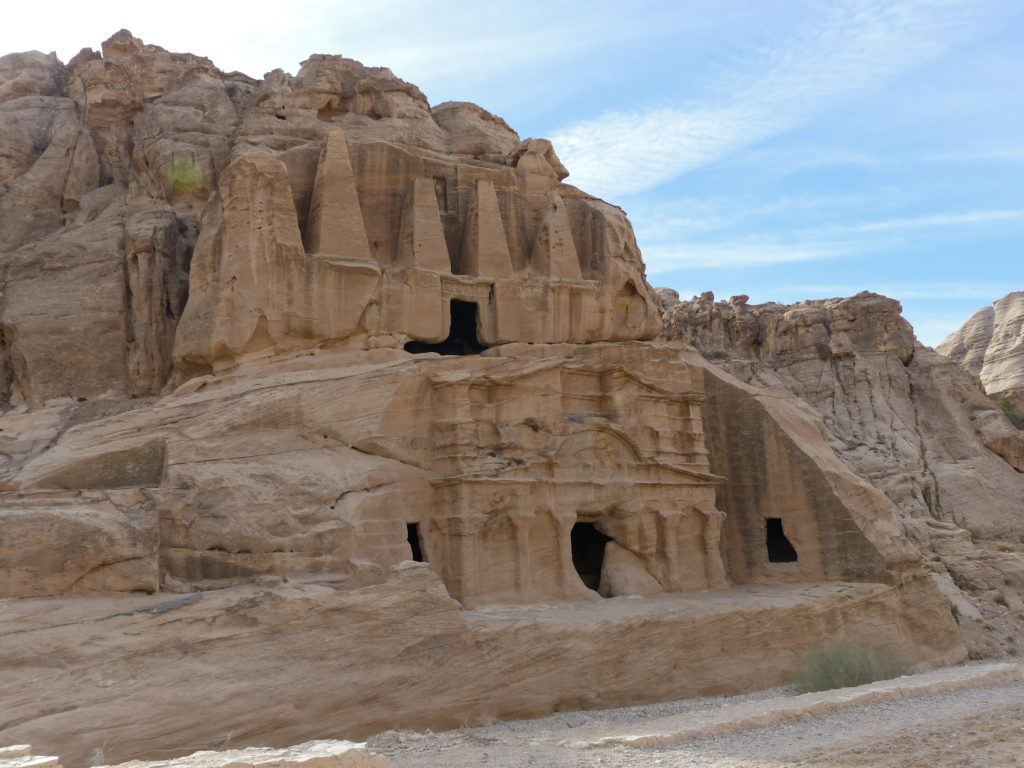 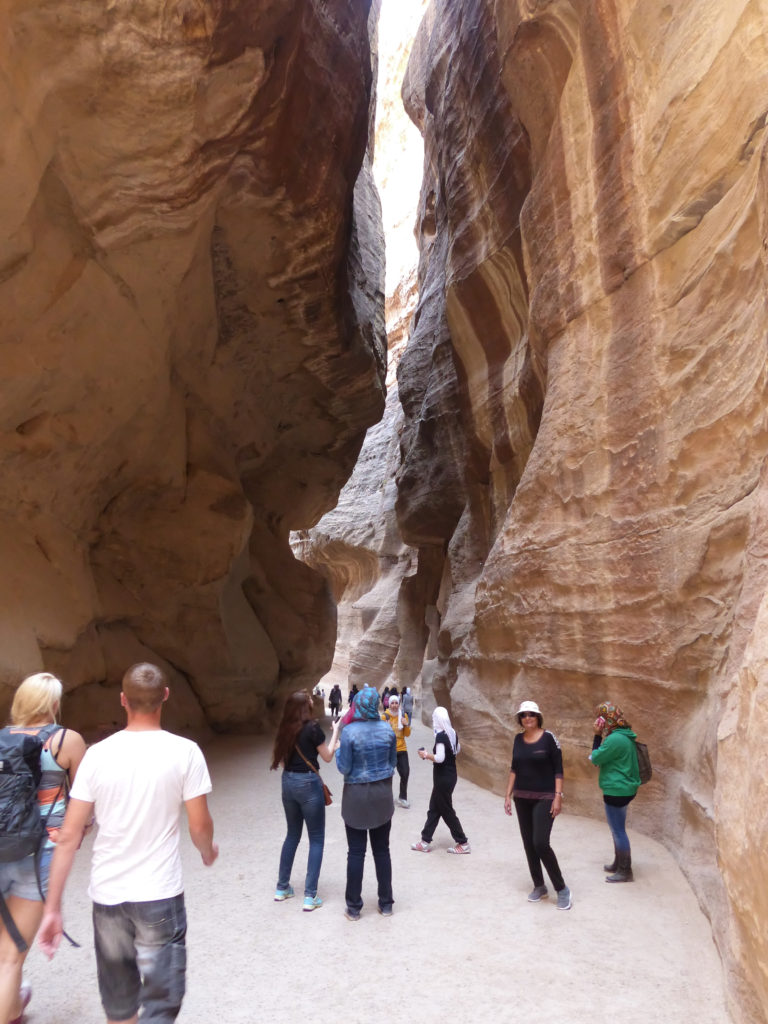 The Siq; the 2km walk along the deep gorge to the Treasury 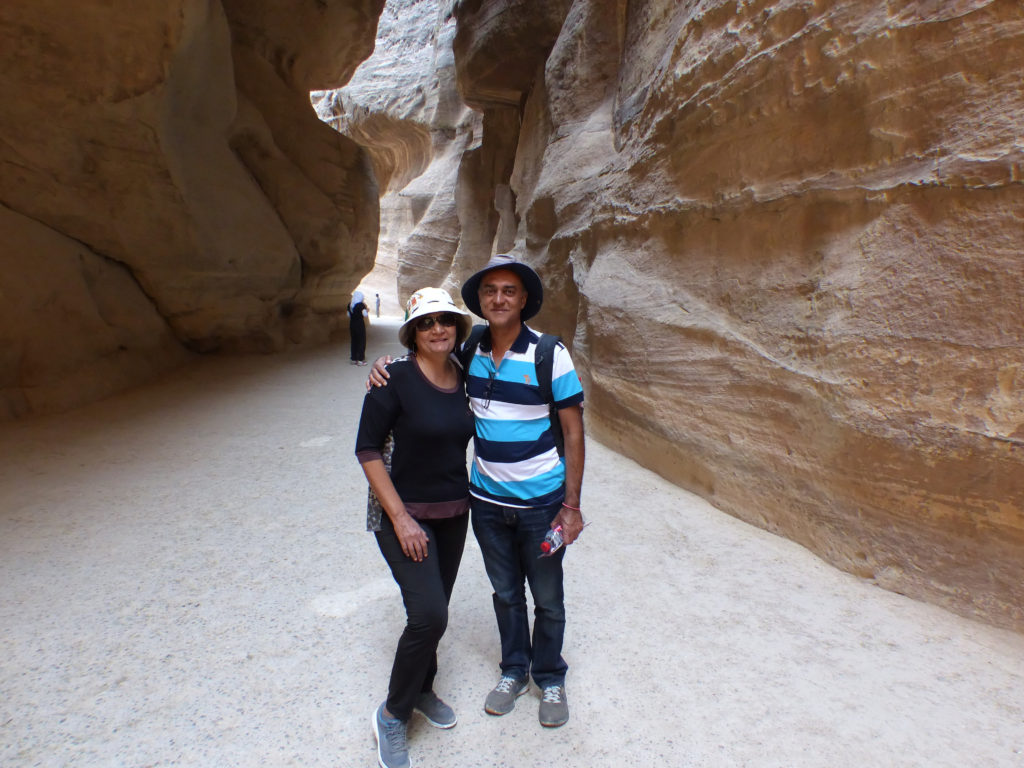 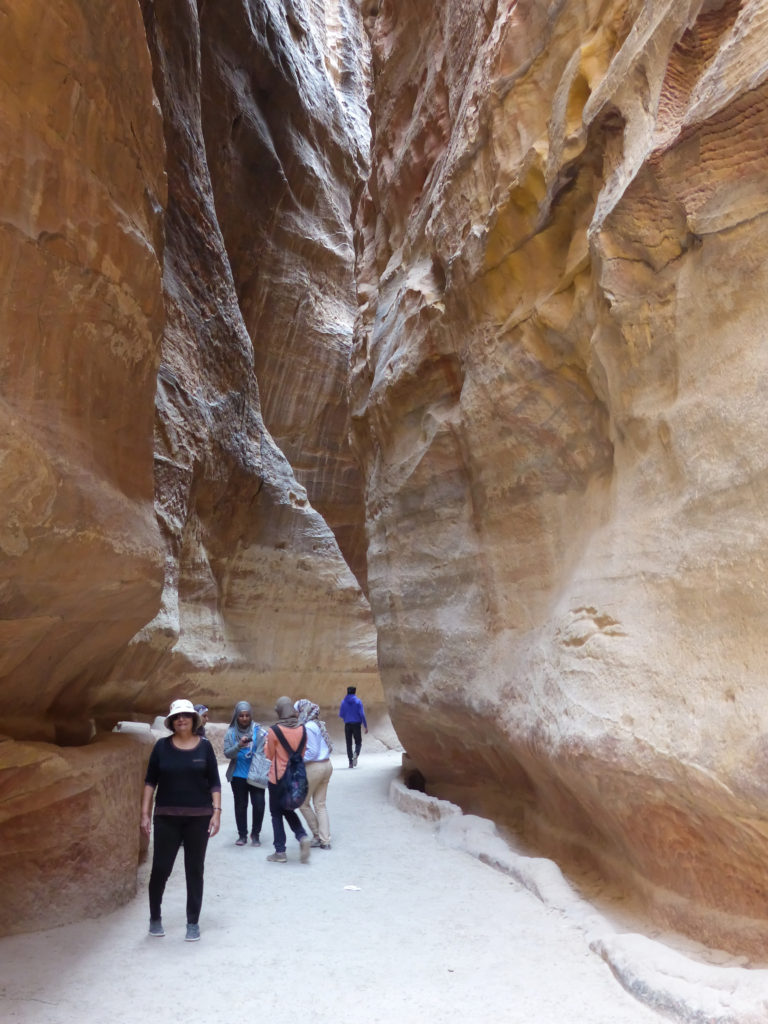 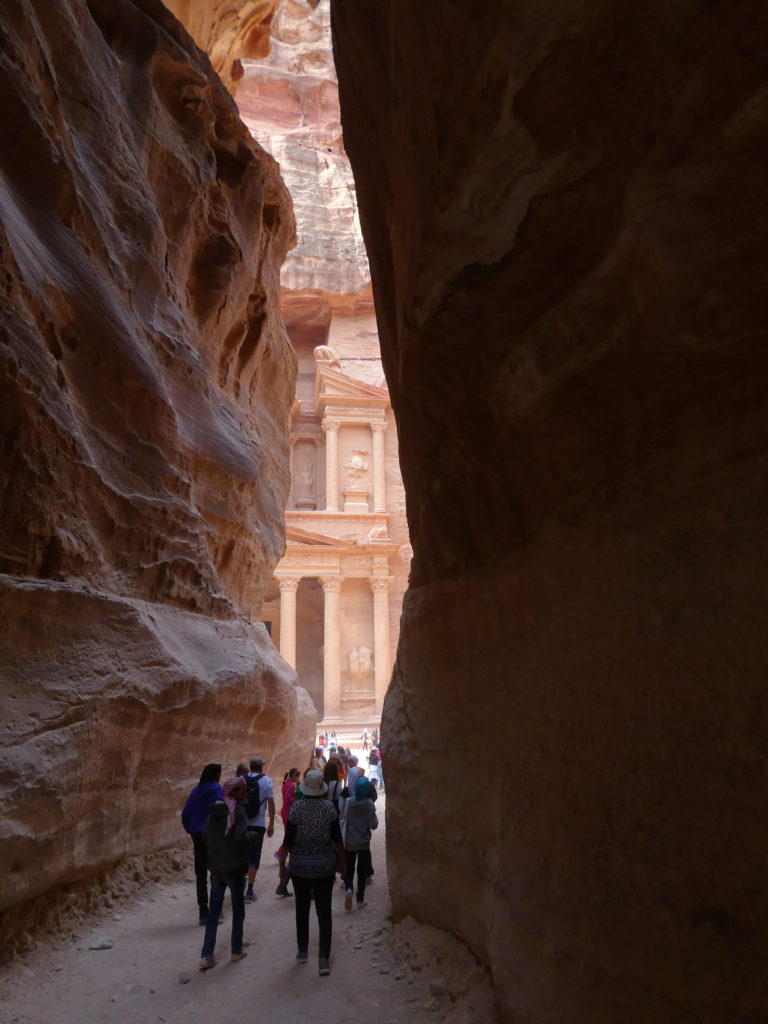 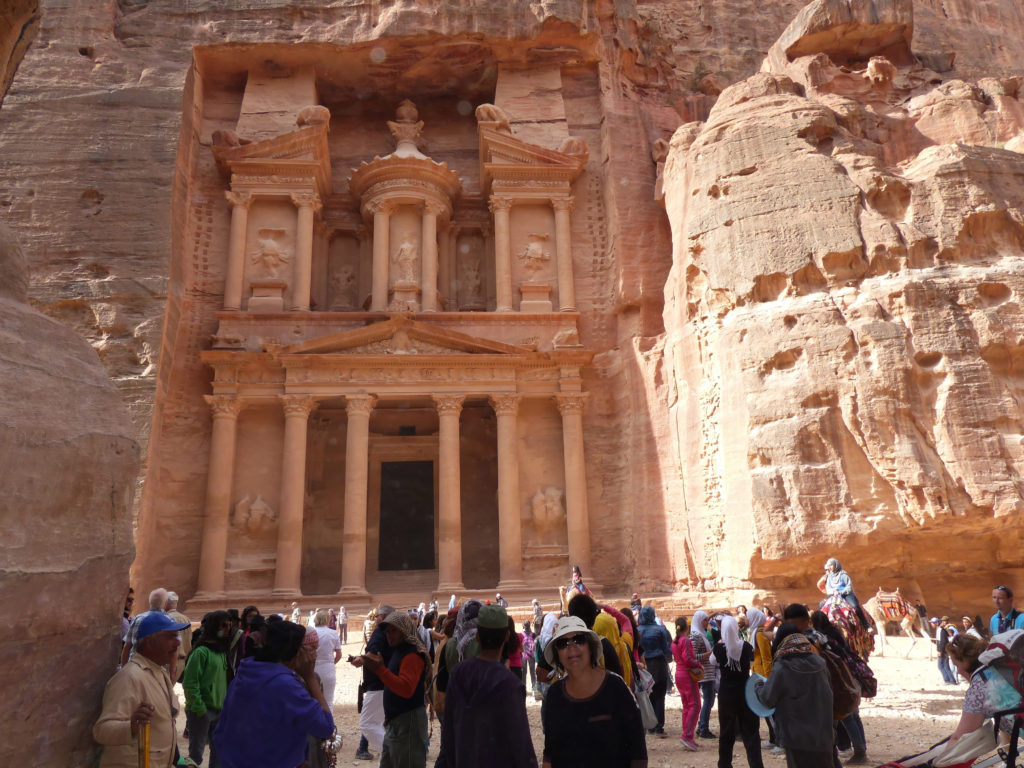 After you get to the Treasury, then you can hike across another 2-3kms in the gorge coming across many caves, relief carvings, tombs, many more ongoing excavation sites, and then climb 800 steps up the gorge to a magnificent temple, with great views of the Jordan Valley, Dead Sea, Israel etc.

We chickened out from walking and climbing as it was getting hot, so we negotiated with the many local Bedouins’ here who were offering donkey rides all the way, to get to the temple on donkeys. The 800+steps were up the sides of the gorge, and were easily negotiated by the donkeys, who knew exactly what to do. See pics to get an idea of their sites. 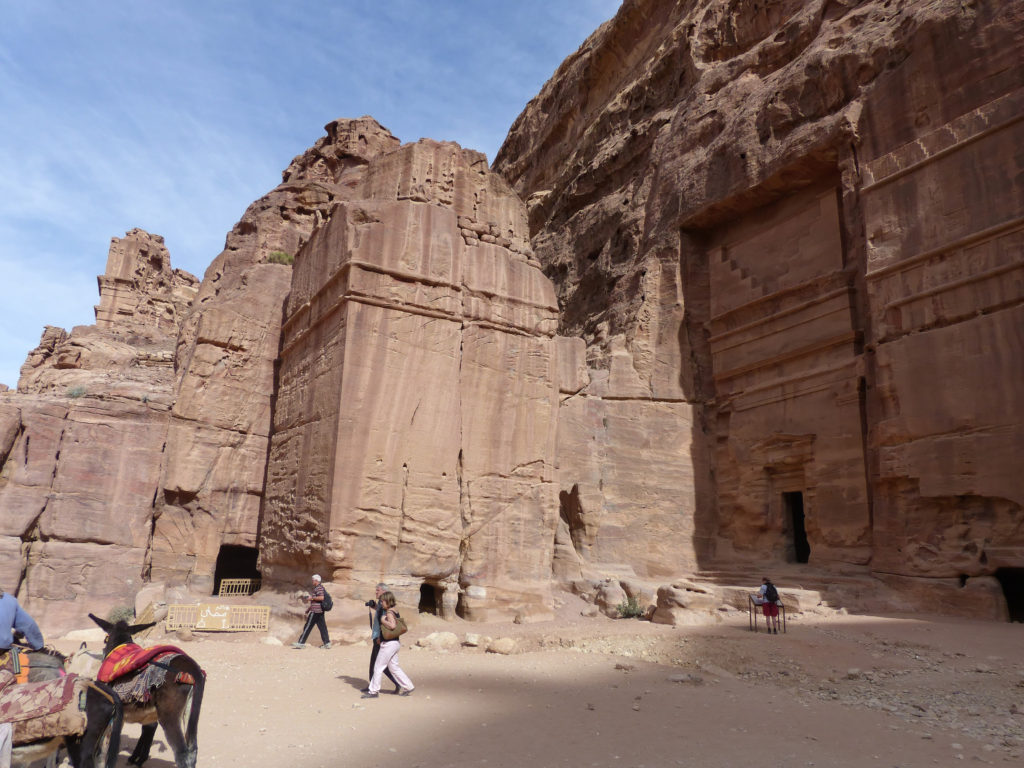 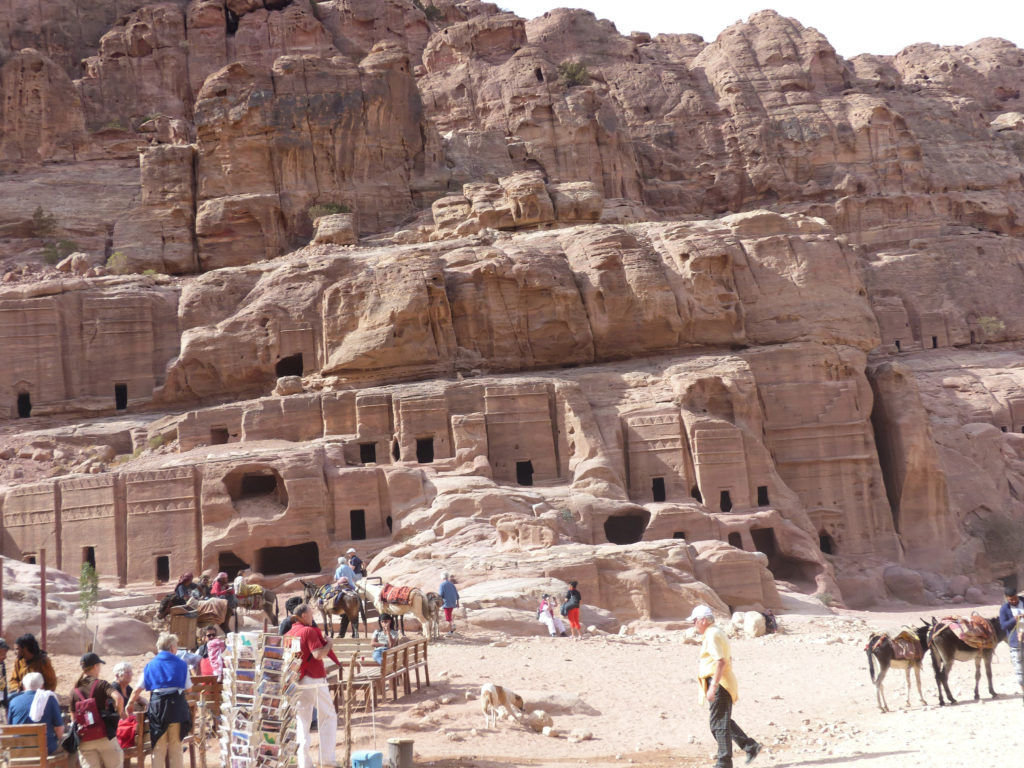 Lots of “cave” dwellings in this ancient town 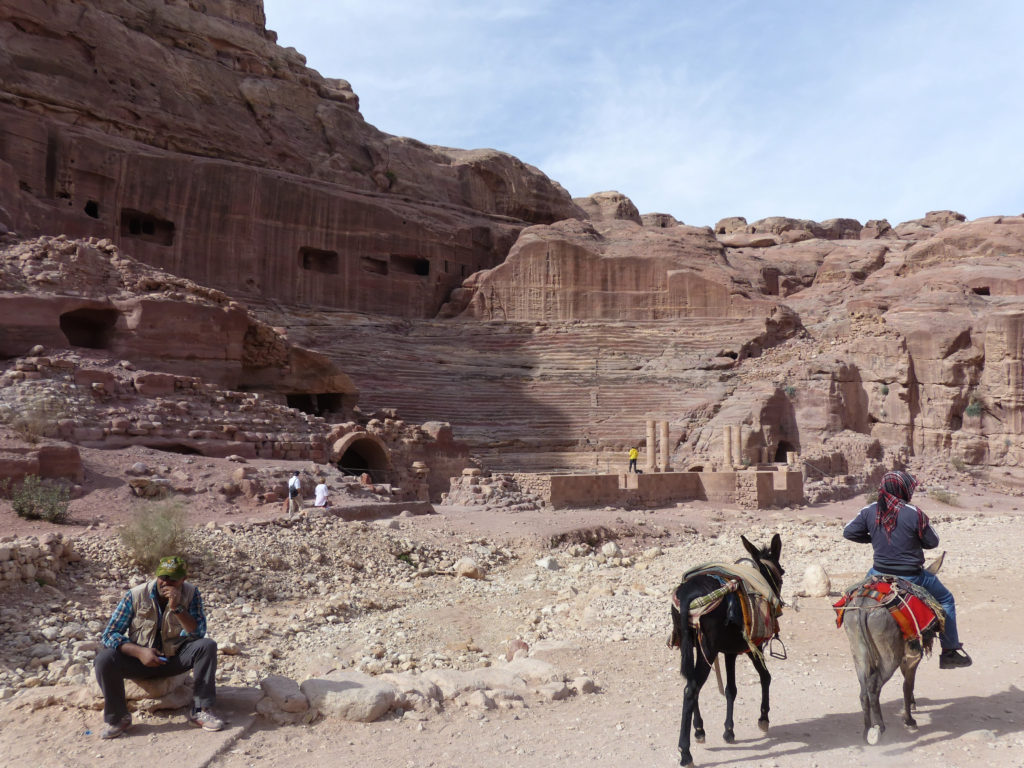 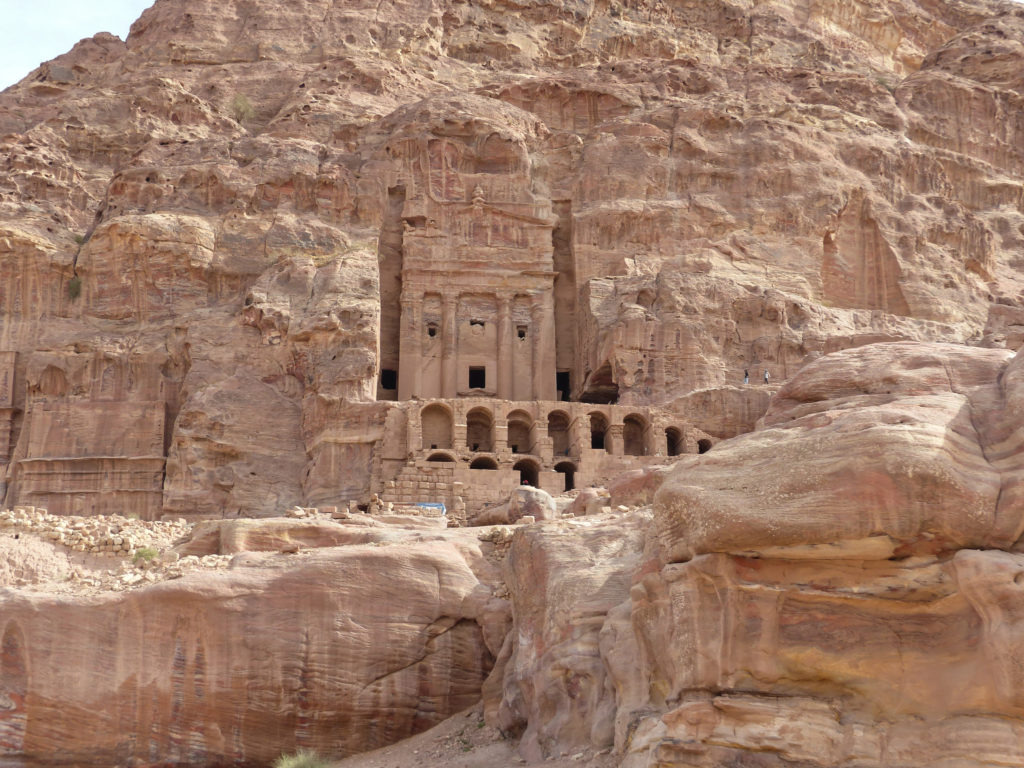 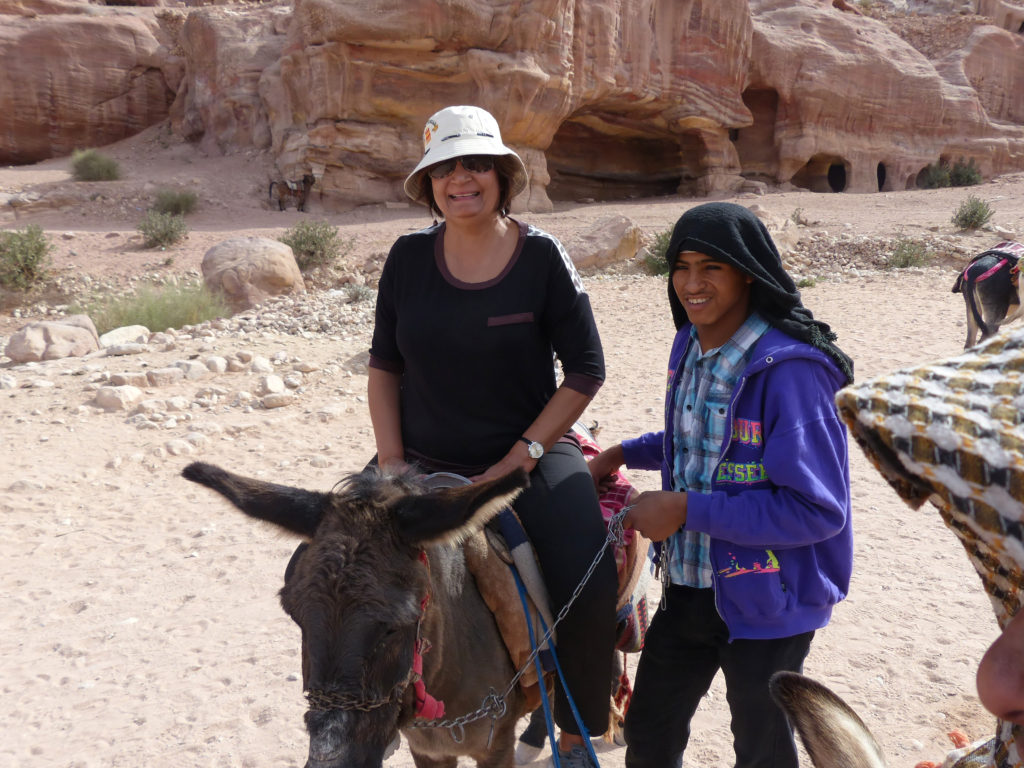 Donkey ride up the 800 steps 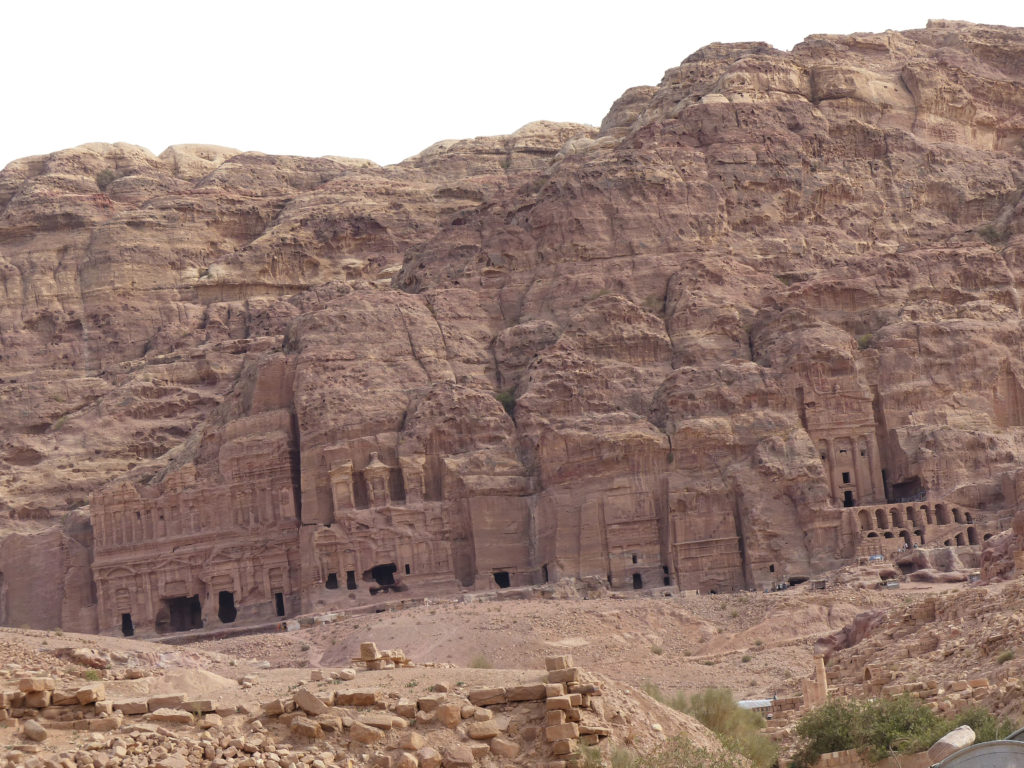 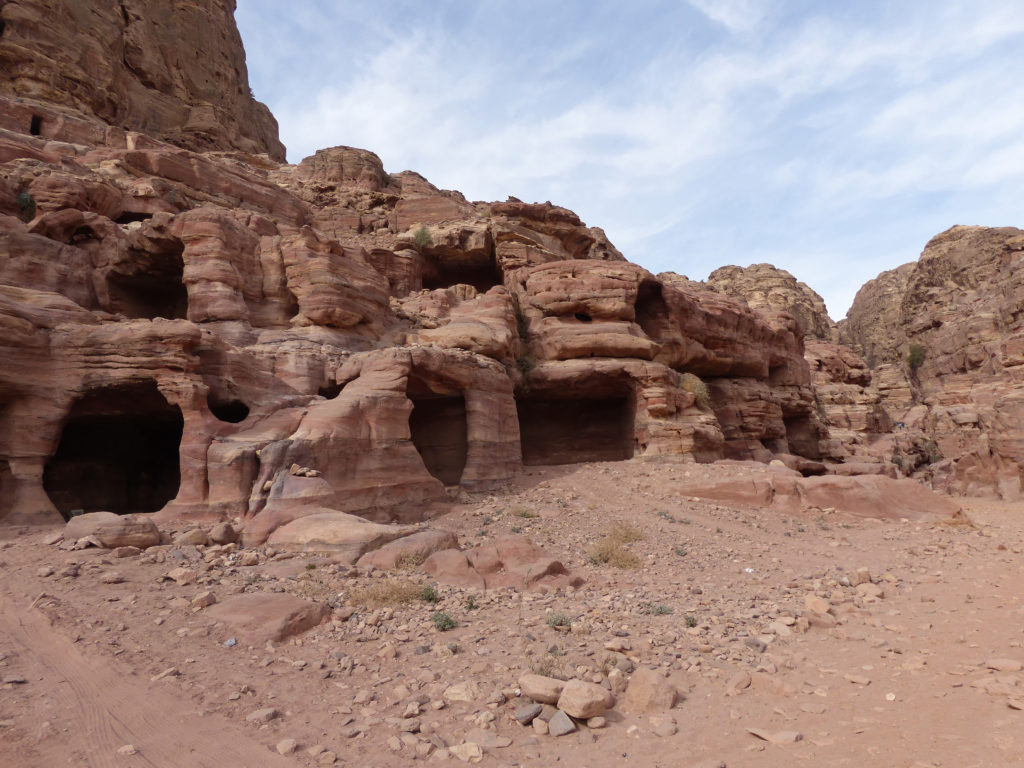 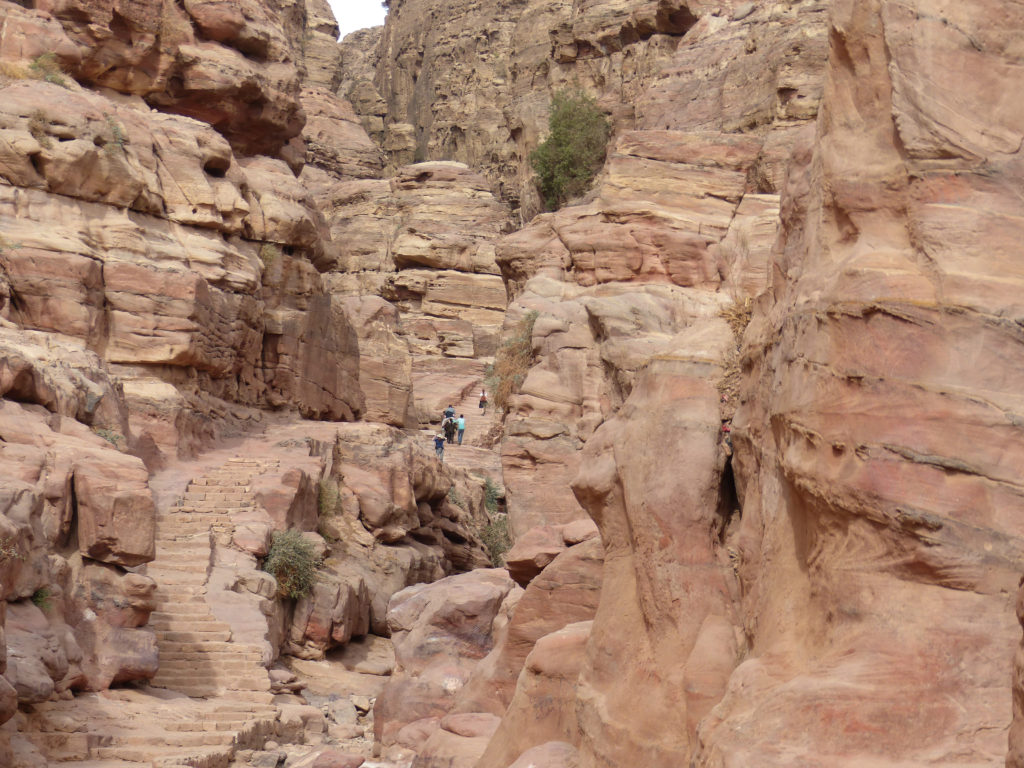 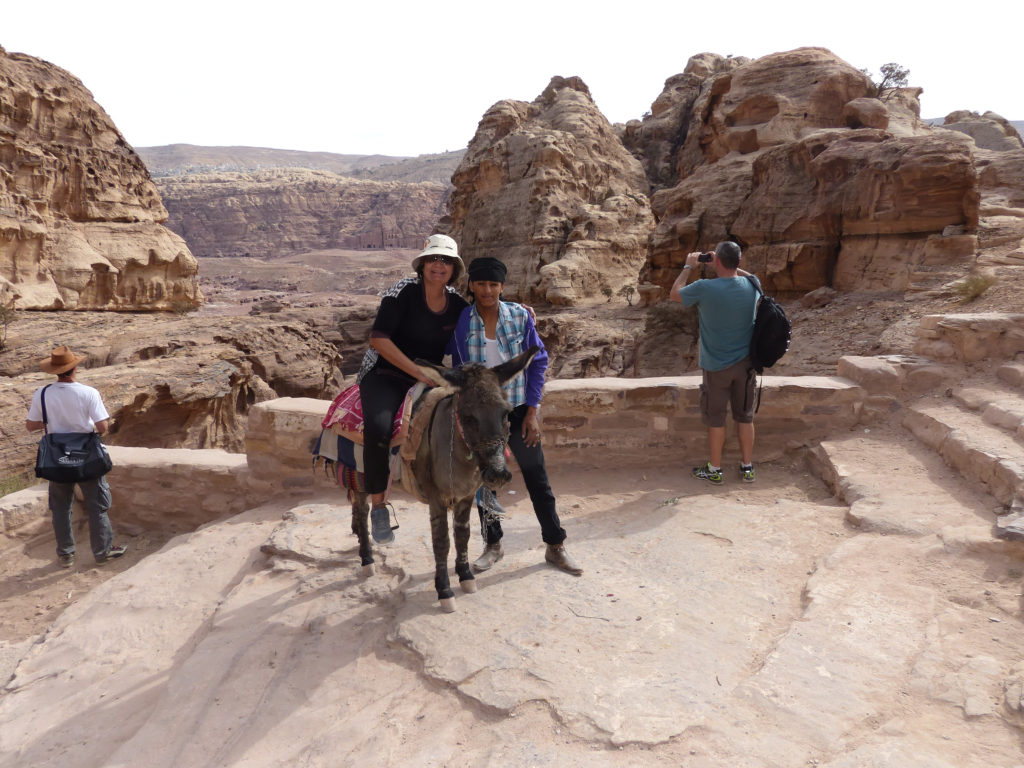 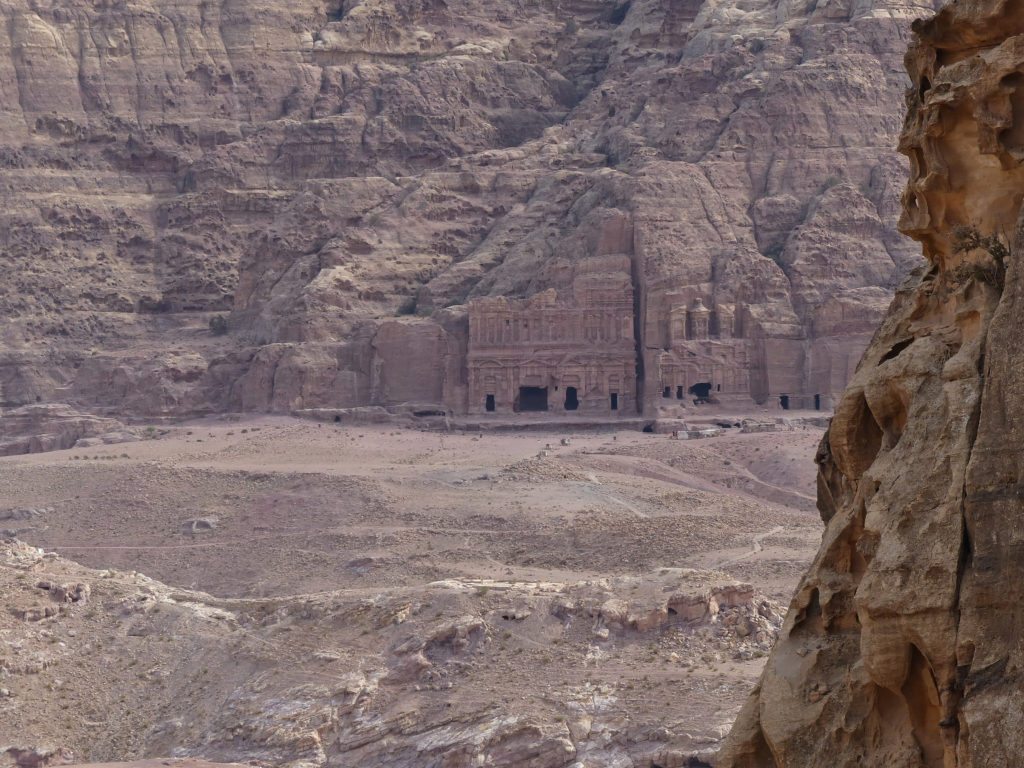 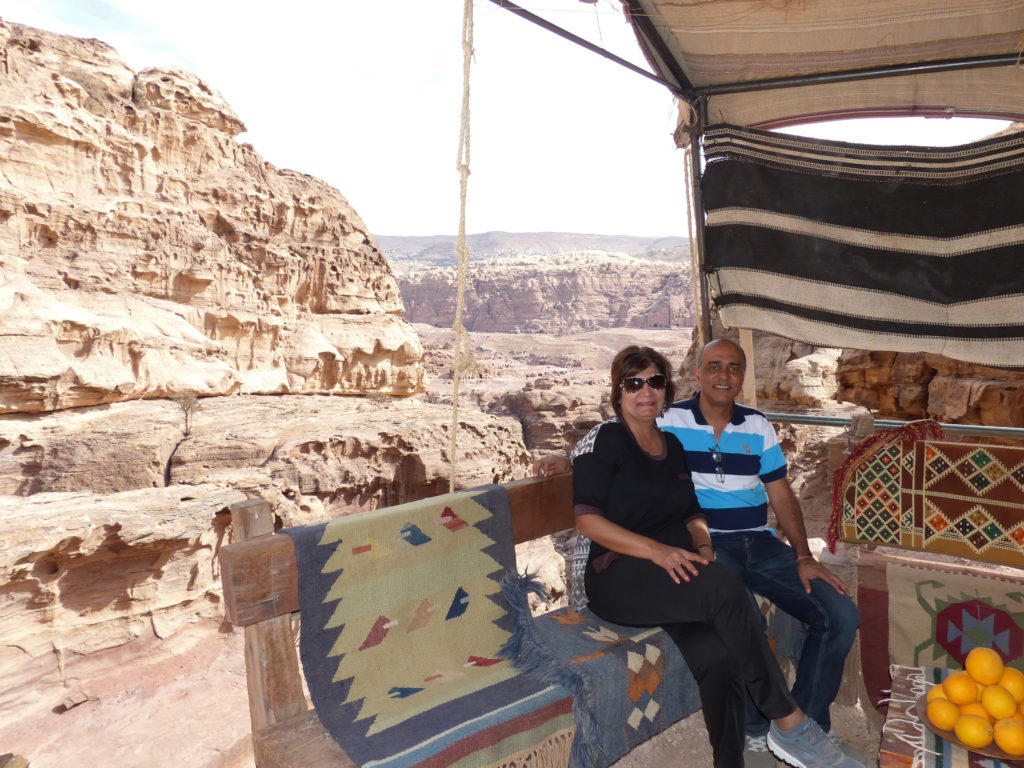 Rest stop half way up for fresh squeezed juice 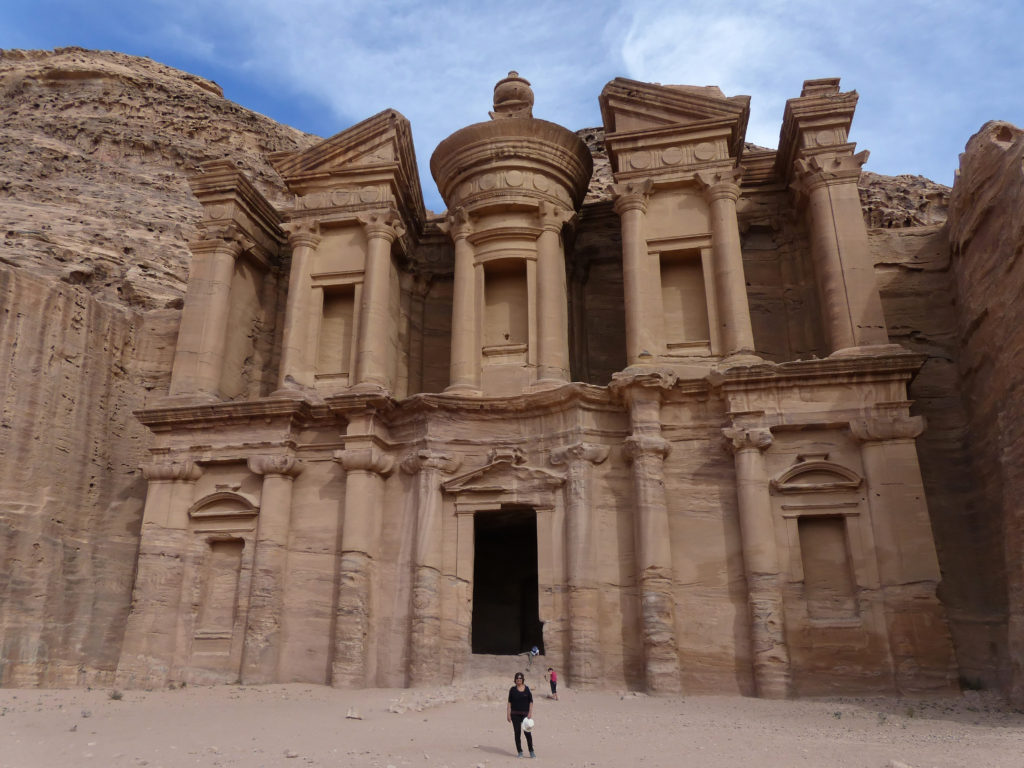 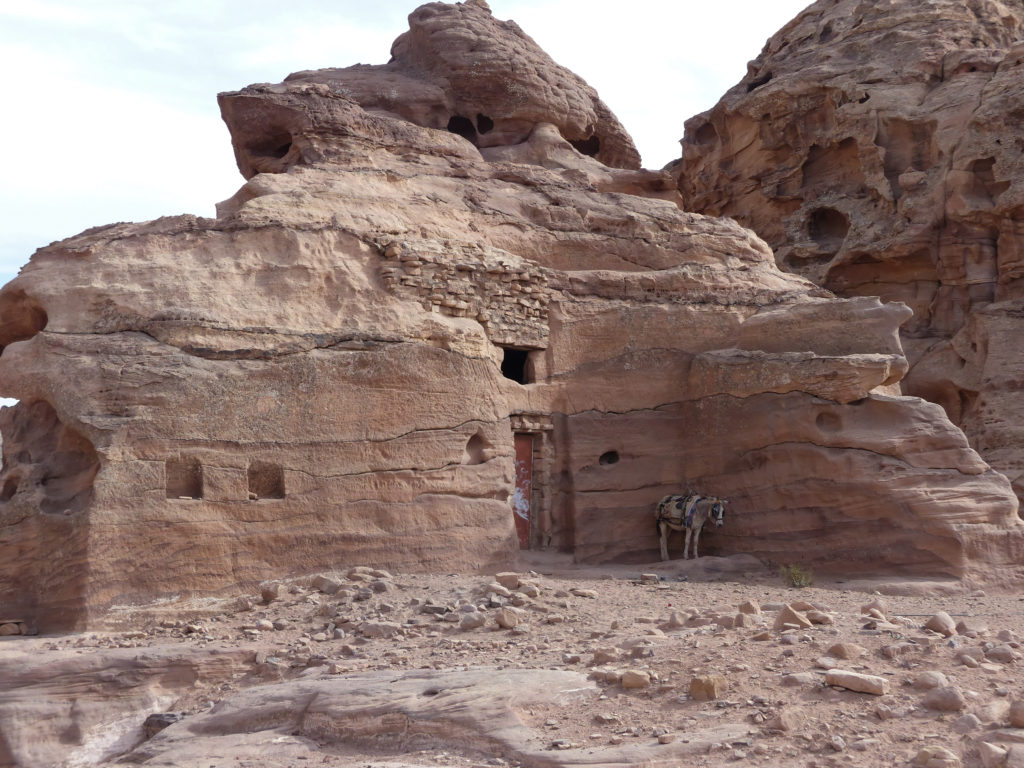 Bedouins still live here by the looks of it? 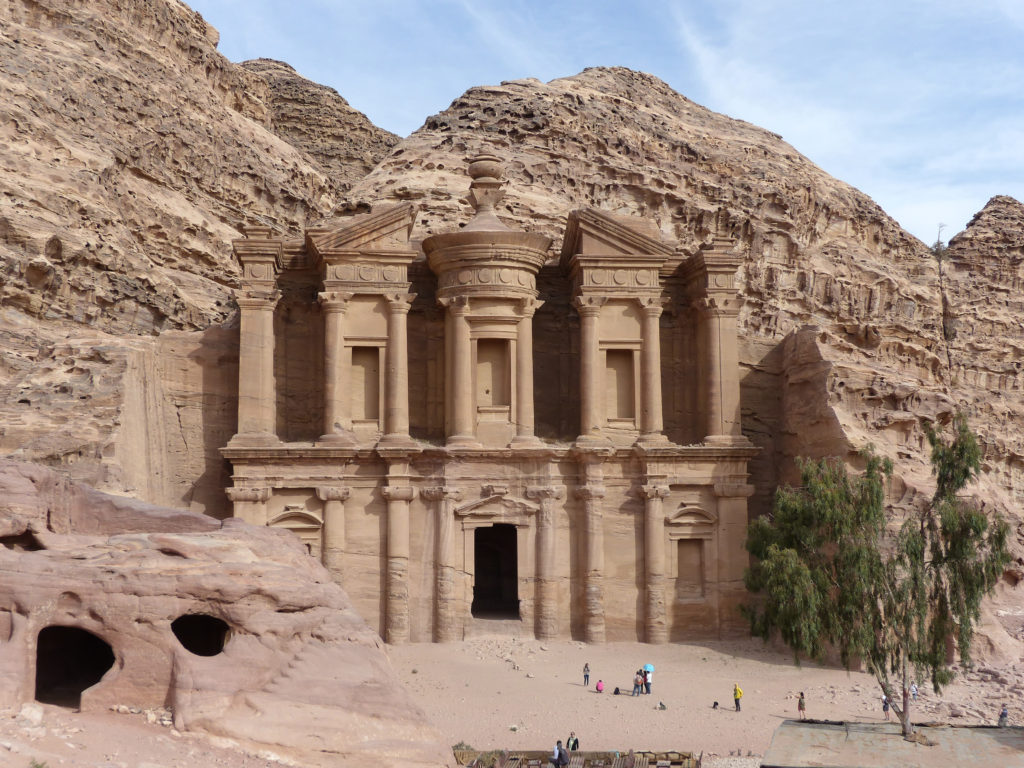 Monastery at top of hill 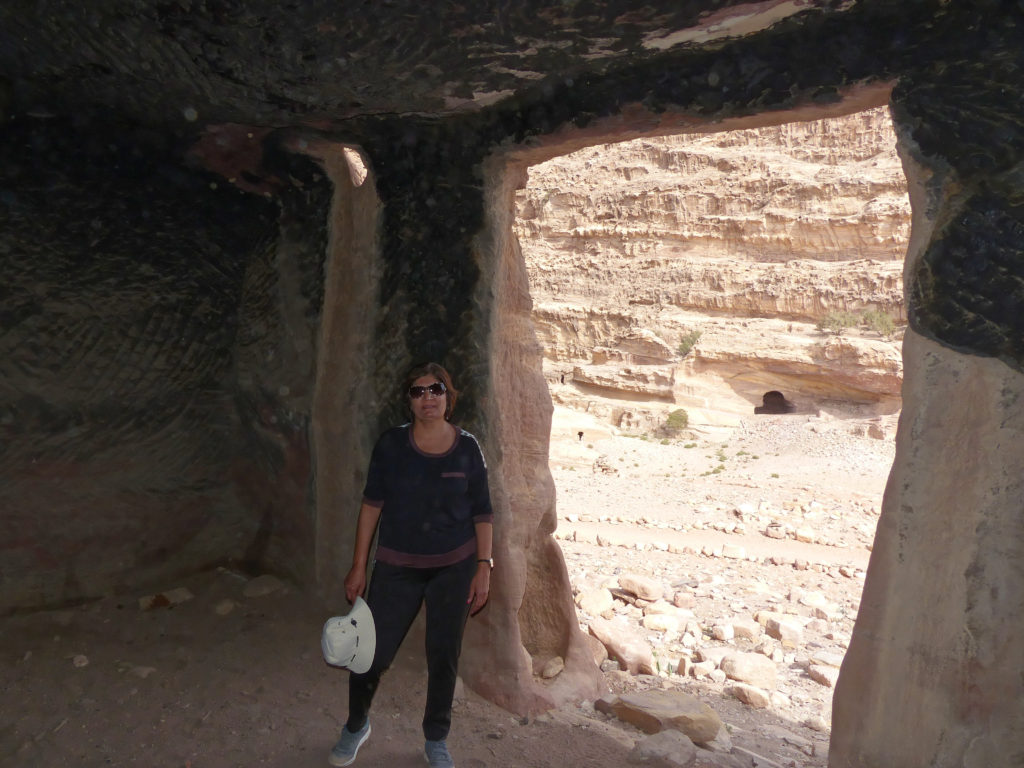 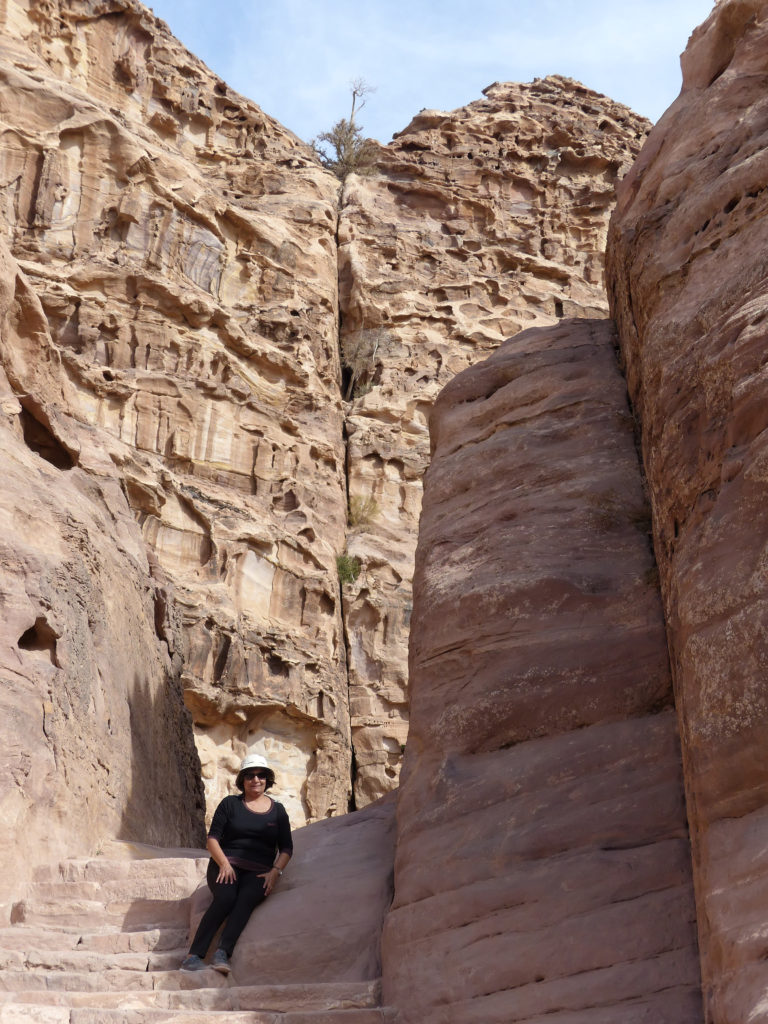 Note the cliffs behind Dilshad 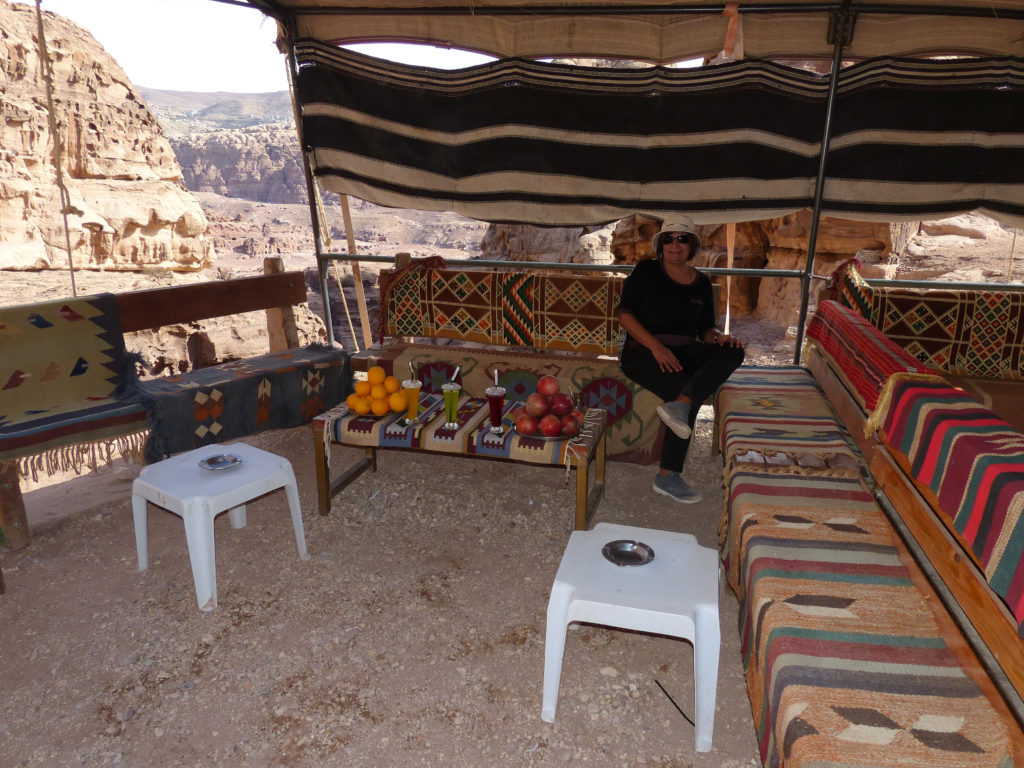 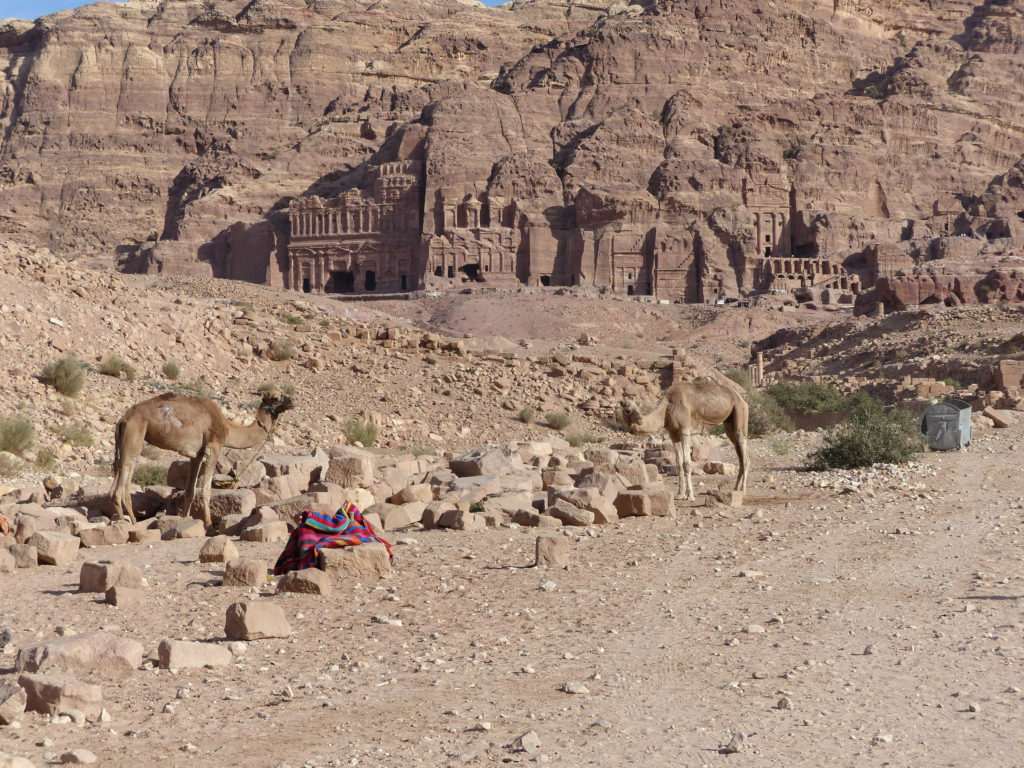 After Petra, returned to Wadi Musa, to look for local eating places. Found several in the old town area, and had the normal arabic kebabs, and tried the Galayeh, the local dish made of tender pieces of lamb made in a nice spicy stew of tomatoes, onions and peppers. Very nice. 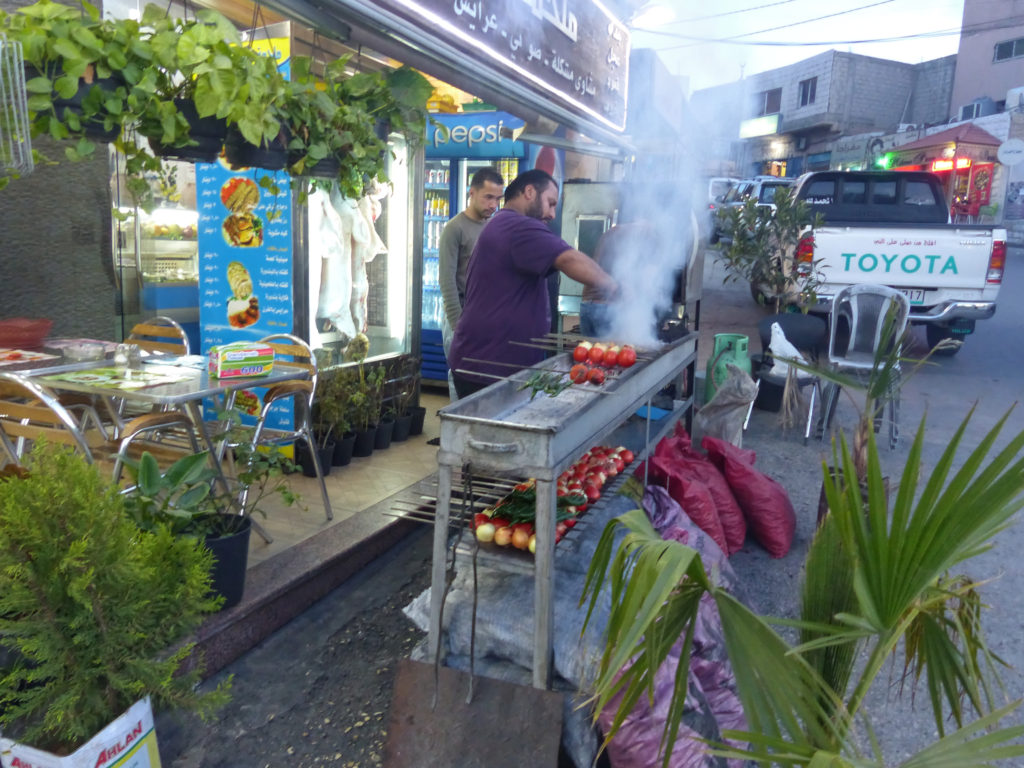 After dinner, decided to get a haircut, and found out that there were many barber shops here; picked one that had just had an opening. Negotiated cost was 4JD’s ($6). So sat down in the barber’s chair and proceeded to let the barber know what I wanted.

The barber in the next chair advised me that since I was now in the barber’s chair, I had no need to tell the barber what was required as he would know exactly what to do. OK. So after finishing the haircut, the barber proceeded to do “threading” on my face, to remove the finer hairs on the cheeks and forehead etc.

First time I have ever had that done, and it does sting a little. But when he did the same thing on my ears, that hurt a lot. Dilshad and the locals had a good laugh at my expense 🙂. Now I know what women experience when they get threading done.

On the way back to the hotel, got lost and stopped to ask for directions. A guy getting into his car told me to follow him. He took the residential backroads and drove almost all the way to our hotel, pointed it out, and then turned around and drove back to his business. Yet another random act of kindness. Jordanians have to be some of the nicest people we have visited.

Drove back to Amman the next day, using the Kings Highway and the Desert Highway. The Kings Highway is the original highway across Jordan, and goes through a lot of towns, as well as many historical areas. The Desert Highway, on the other hand, was built in the east of the country over the desert, connecting Amman to Aqaba (port on Red Sea) and connecting all the nearby towns with feeder highways. This highways was very busy as it is the main road used by trucks to transport goods form the port of Aqaba to the all the cities/towns, and vice versa.

We stopped at Karak and Dana village along the way next

Have you ever thought about adding a little bit more than just your articles? I mean, what you say is valuable and all. But just imagine if you added some great video clips to give your posts more, “pop”! Your content is excellent but with pics and clips, this site could definitely be one of the best in its field. Great blog!