Nalunega and Guna (or Kuna) Yala

Next morning, we woke up early, and were at the hotel entrance by 5AM, for a drive to Guna Yala, (previously known as Kuna Yala and prior to that, San Blas). Waited and by 5:30AM, nobody had come. So texted Luchin to find out what was happening, and he found out that the drivers family had an emergency, so that driver was not doing the drive today.

Luchin hurriedly arranged another ride for us, but it only had 2 seats, and there were no other rides that day. So at 6AM, we got picked up in a 4×4 SUV, and drive off to Guna Yala along the Pan American highway, towards Colombia. Luchin would come the next day, but made arrangements for someone to meet us in Guna Yala.

The Guna people of Guna Yala are the indigenous native Indians of Panama. Guna Yala autonomous region is a narrow strip of land that straddles Panama and Columbia along the Caribbean sea. Most of the Guna (pop 25,000) live on about 40+ inhabited islands out of the 365 islands surrounded by sand and coral reefs.

Brief History
The Guna were treated unfairly by the Panamanian Govt after Panama was formed in 1903, and after Panama tried to get rid of their culture, heritage and language, the Guna revolted in 1921-1925; and after a lot of bloodshed, they seceded from Panama and briefly formed the Republic of Tule, before negotiations led to an agreement for an autonomous region of Guna Yala, within Panama, protecting the GUna culture, heritage, language and way of life. The Guna have fiercely held onto their customs and way of life for many years.

In the SUV, we had a driver, a Spanish visitor, Guna Yala mother+2 children, and us two. Only the Spaniard spoke English. On the way from Panama City, the Pan American highway heads east and south to Colombia. After a brief stop for breakfast at a local restaurant, we carried on and at the small town of El Llano, we turned left or north, towards the port of Carti. The road started climbing steeply, and very shortly, we were in the San Blas Hills, which were cloud forests. You could see the clouds covering the hills; making it a beautiful drive. 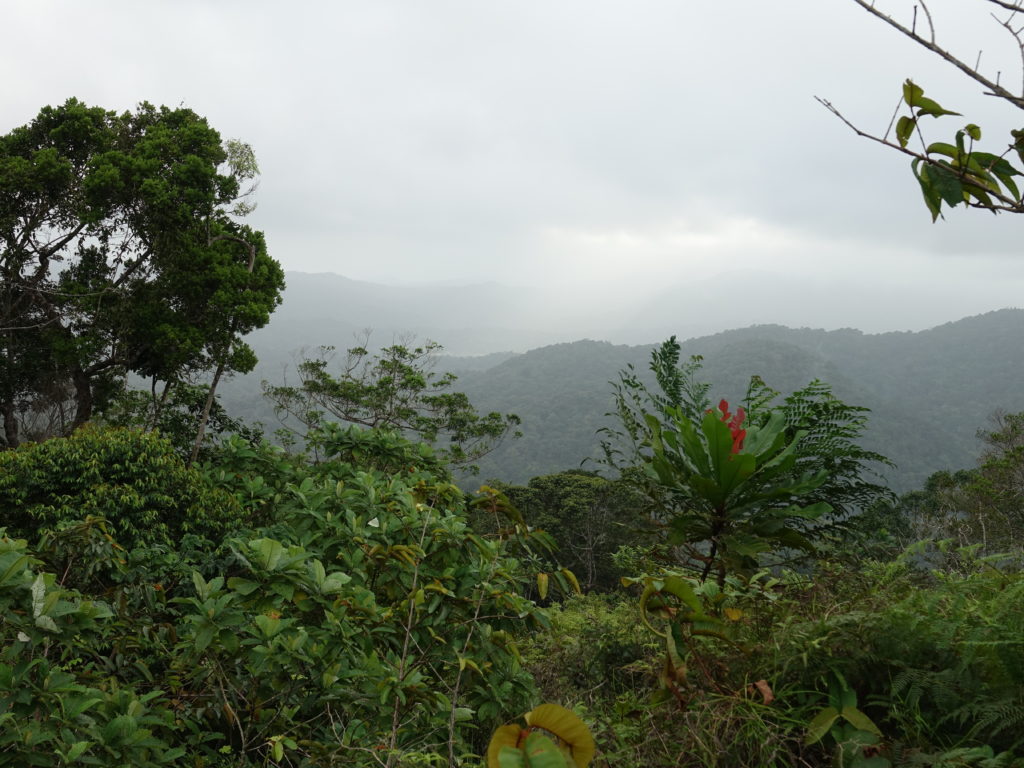 Soon , we arrived at a military stop, which was the border between Panama and the Guna Yala autonomous region, where our passports (foreigners only) were checked. We got waved on, and stopped again in 15ft for the Guna Yala checkpoint.

Important Info
At Guna Yala checkpoint, we (foreigners) had to pay $20 each (a visa type tax) to enter Guna Yala and later a $2 each at Port offices.

We continued driving into the rain forest, and eventually ended on the coastline, at Carti Tupile 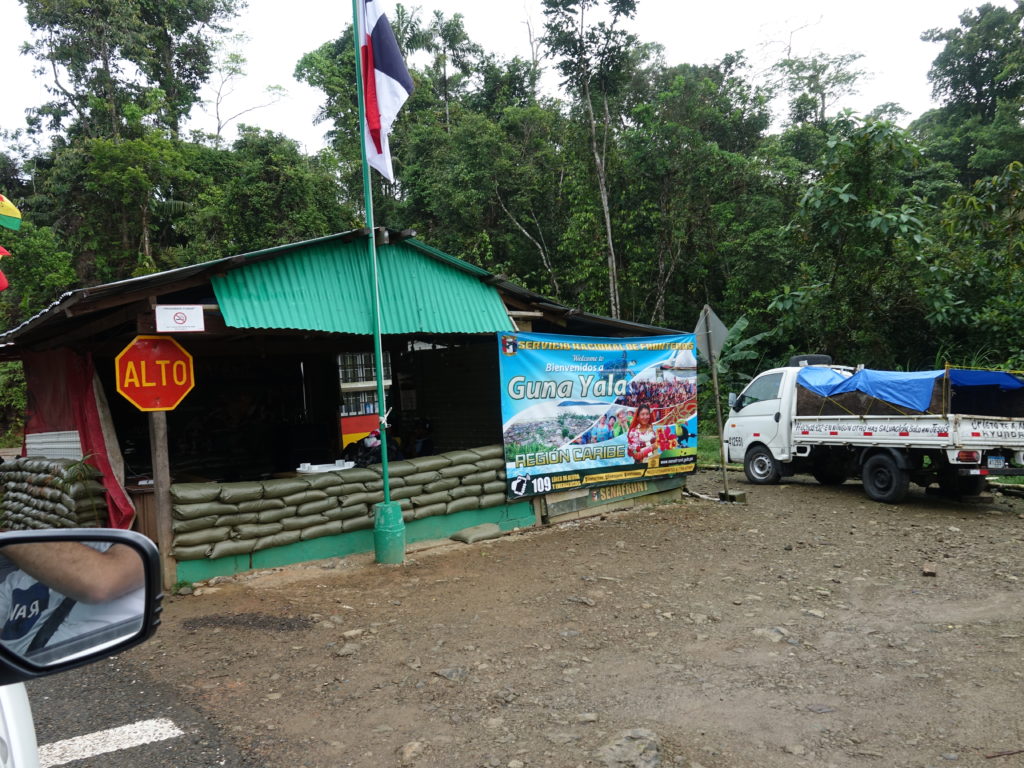 Guna Yala border; note the Guna Yala flag with the swastika; no relations with Nazi Germany

At the port, we stopped at the official port offices to pay the $2 each use fee (again, foreigners only). Not sure what this was for but I assume it was to keep the docks and facilities in good shape. We unloaded our bags, and were met by Rodrigo, who introduced himself as the person who would take us to Nalunega island and generally guide us.

He did know some English, so this was good. We got onto the pier and boarded the Cabanas Nalunega lancha, with the Guna mother + 2 kids that were on the SUV with us from Panama City, and off we went on a 30 min ride to the island of Nalunega; which was the island that Luchin lived on. 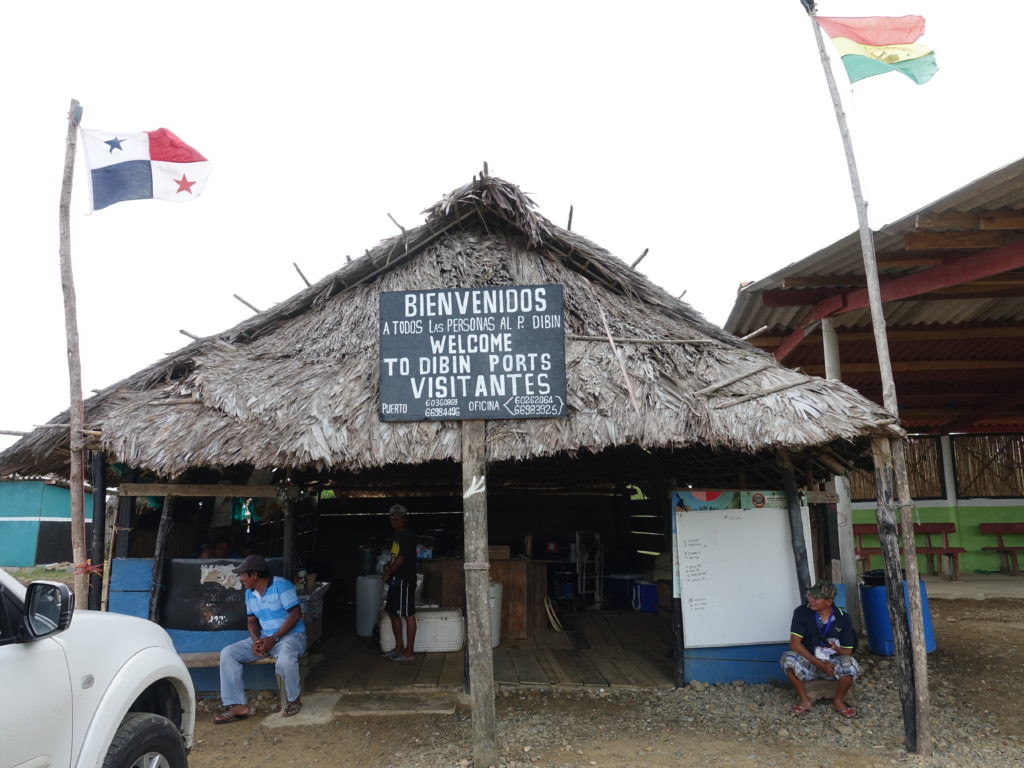 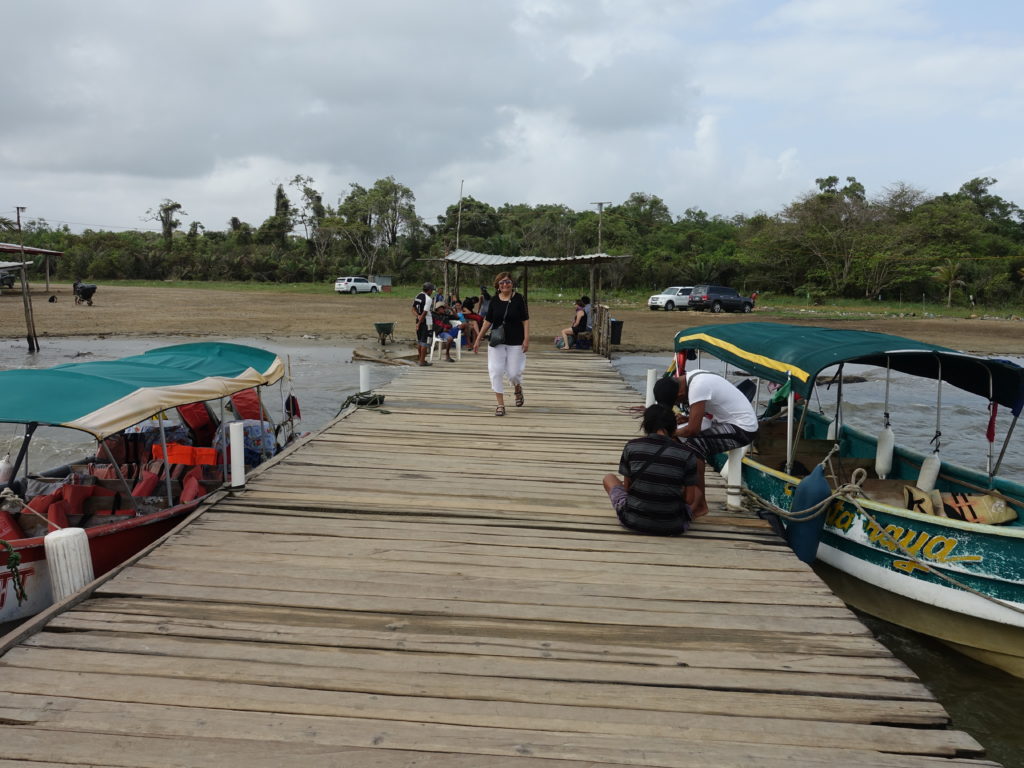 The sea was quite choppy, so we were soaked by the time we arrived at Nalunega. Fortunately, the temperatures were in the 90’s and the water was nice and refreshing. Got off the lancha and went into the small restaurant/shop at the pier, where the proprietor greeted us by welcoming us to Nalunega; he spoke a few words of English, and had a big smile. Apparently, this is where we were to stay, just behind the shop/restaurant. 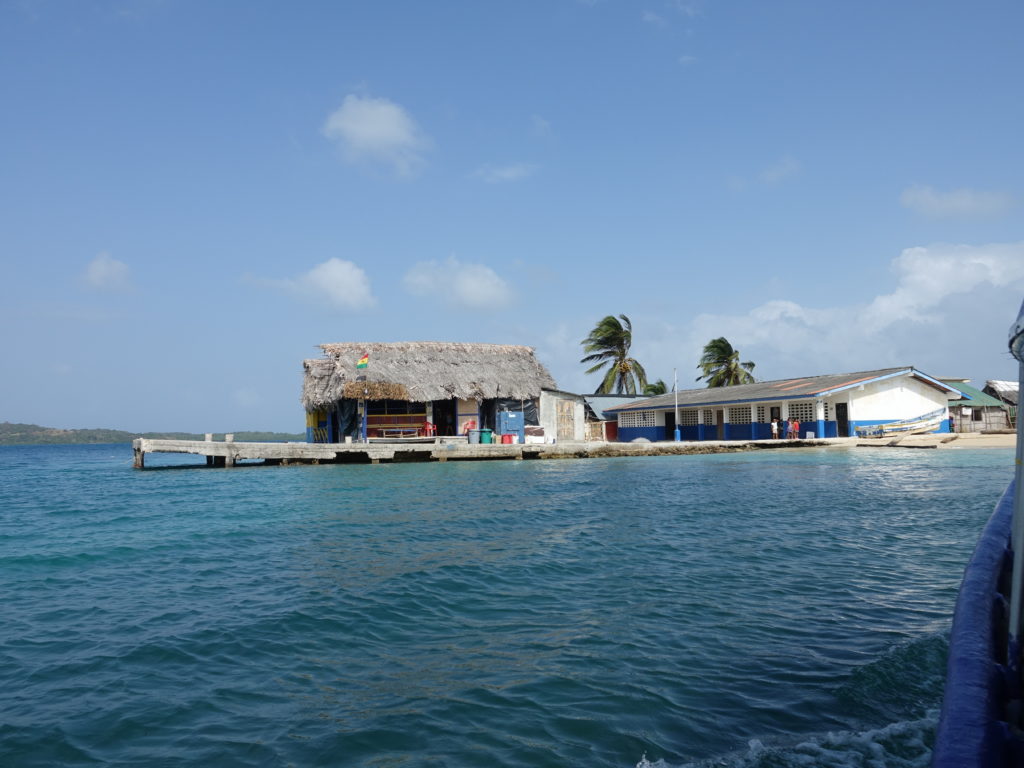 Arrived at Nalunega island, and our lodgings under the thatch roof. The solid building (white+blue) was the local school 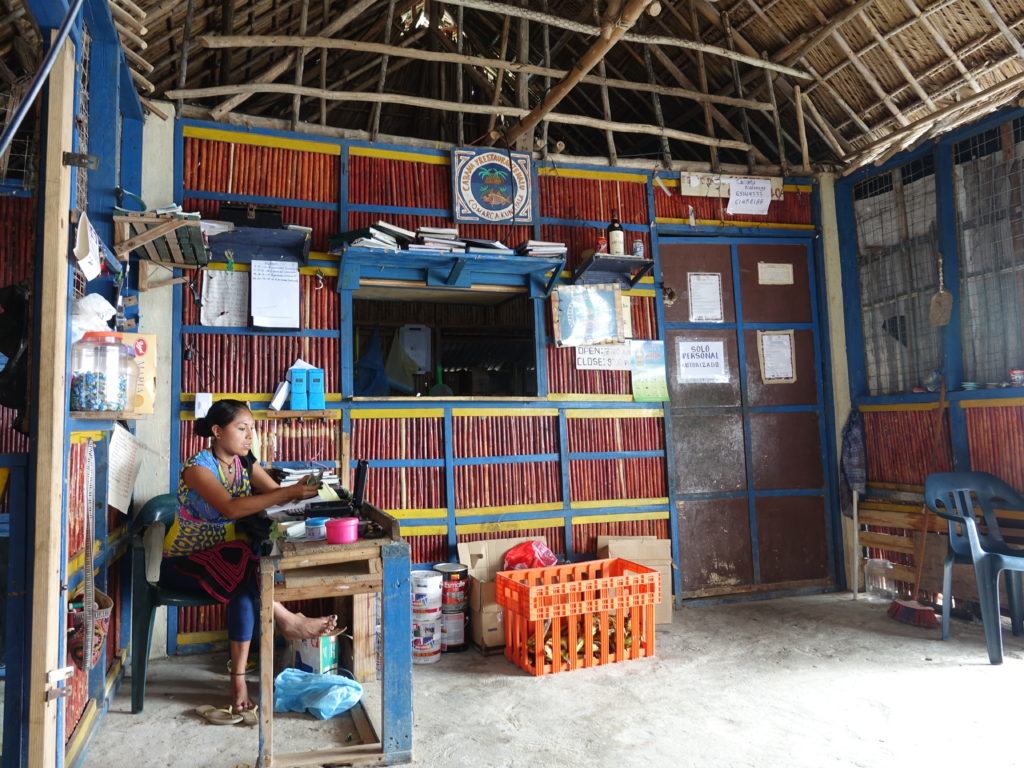 The shop at the pier, our “hotel”. Note the cane sugar construction. 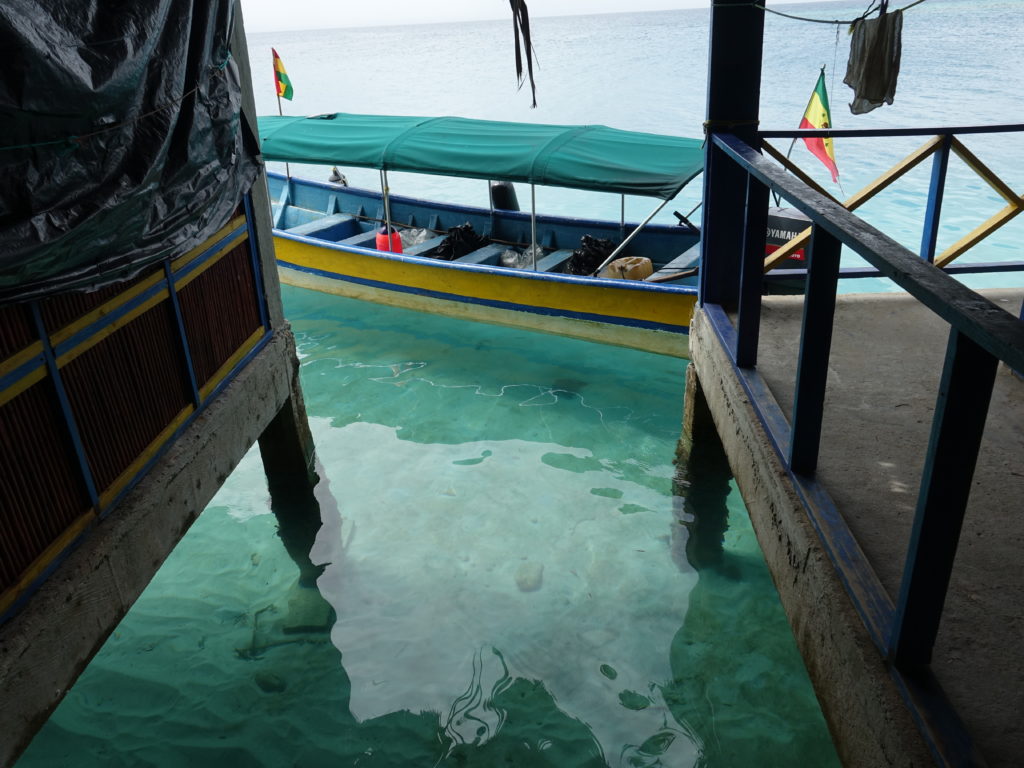 View outside our room; clear waters of the Caribbean

We were shown our room behind the shop, and it was a simple room, built with cane sugar for the walls, and a thatched roof, and one bed with a mattress that had seen better days. There was a bulb and light switch but nothing happened when I flipped the light switch. We were shown the common bathroom, which was like an outhouse over the sea, with a door that did not close properly :(. Fortunately, they had no other guests while we were there 🙂

We dropped our luggage in the room, and after changing, we were served breakfast of fried eggs, bread, & coffee. We were asked what we wanted to eat for lunch and dinner, and we asked for fish for lunch, and lobster for dinner. The proprietor smiled broadly, and took us behind the restaurant and showed us the lobsters for our dinner; they were in a net bag immersed in the clear waters of the Caribbean 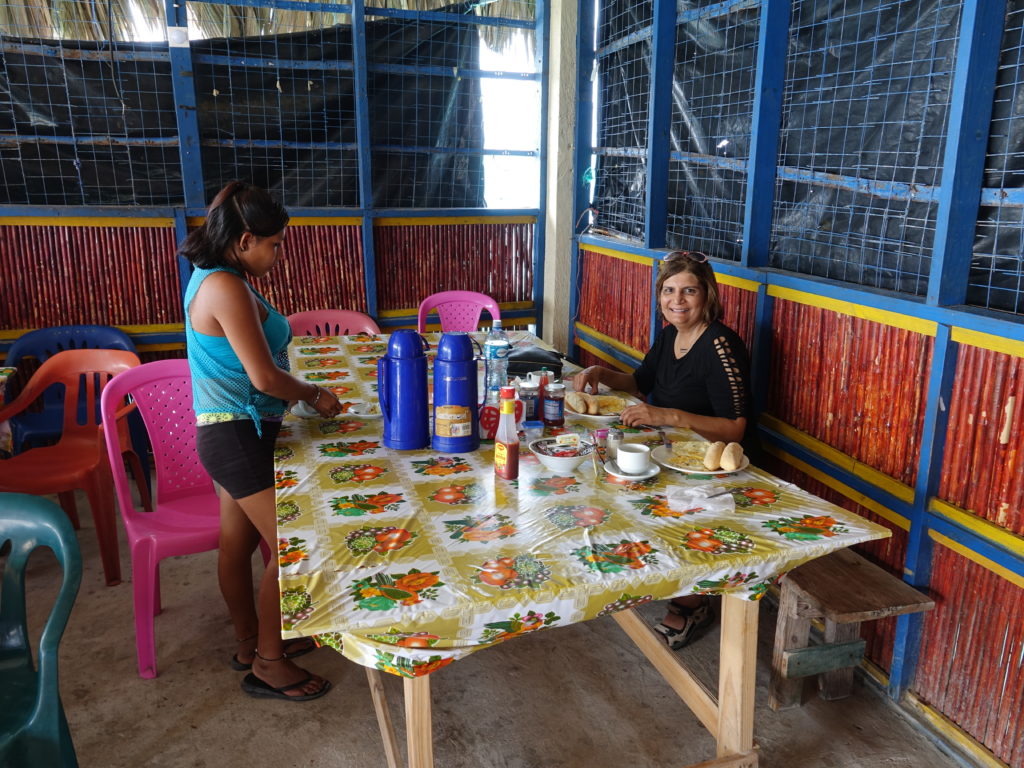 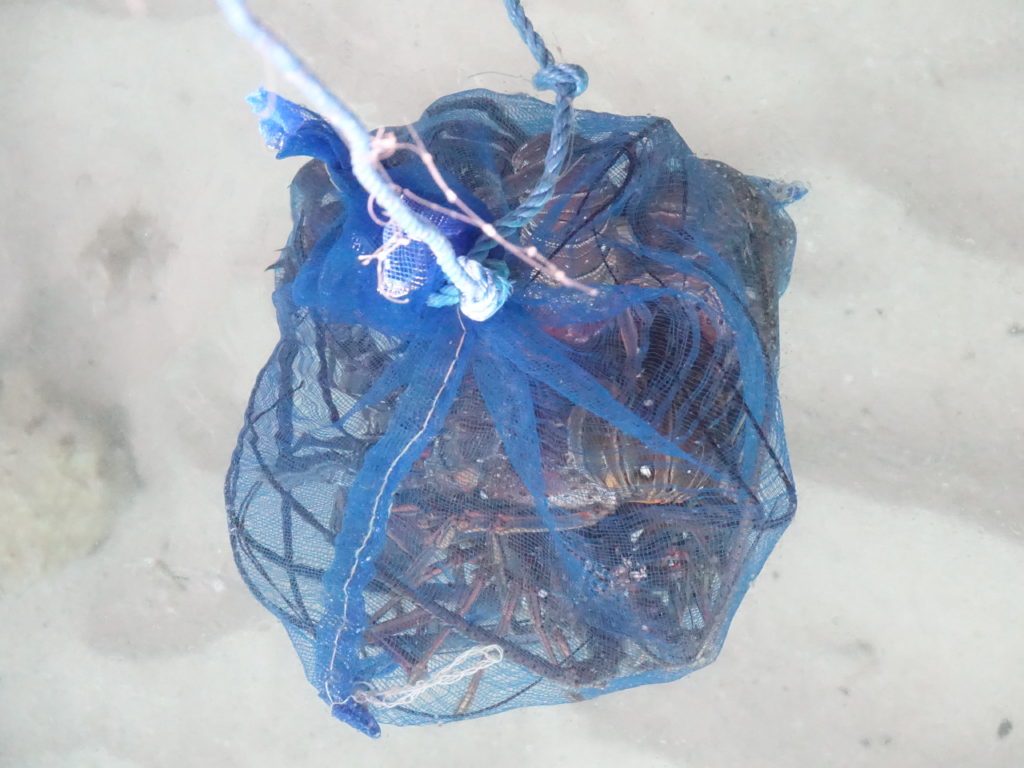 Fresh Lobsters for dinner. The bag is in the sea; water was so clear 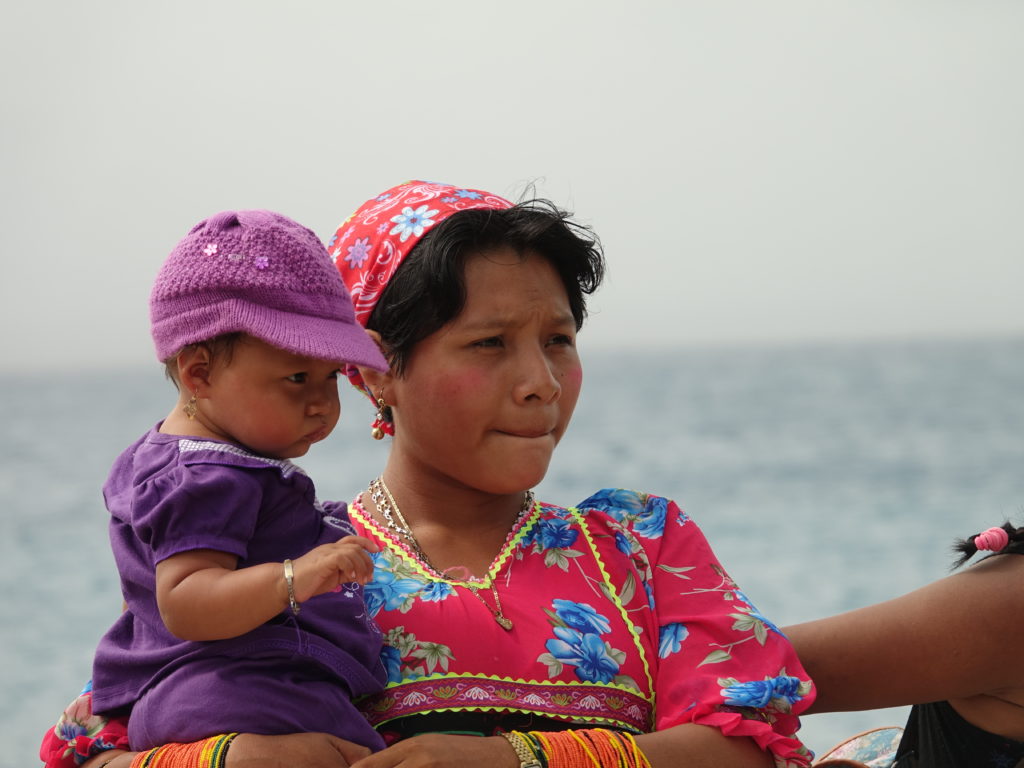 Info about the island of Nalunega
The island of Nalunega had 300 people living there, including lots of kids. The island is very small, you take 50 steps and you are on the other side of the island. All the housing sides were of cane sugar, and the roofs were either thatch, or tin roofs. Floors were sand, and the houses were simply one big room, with a corner for the kitchen another for eating/gathering, sleeping was in hammocks, and cloths were drying both inside and outside the houses. Bathrooms were outhouses, mostly communal. The houses were very close to each other, but the island was clean, with very little signs of garbage.

I took some photos before we took off in the lancha for a short tour of some other islands. 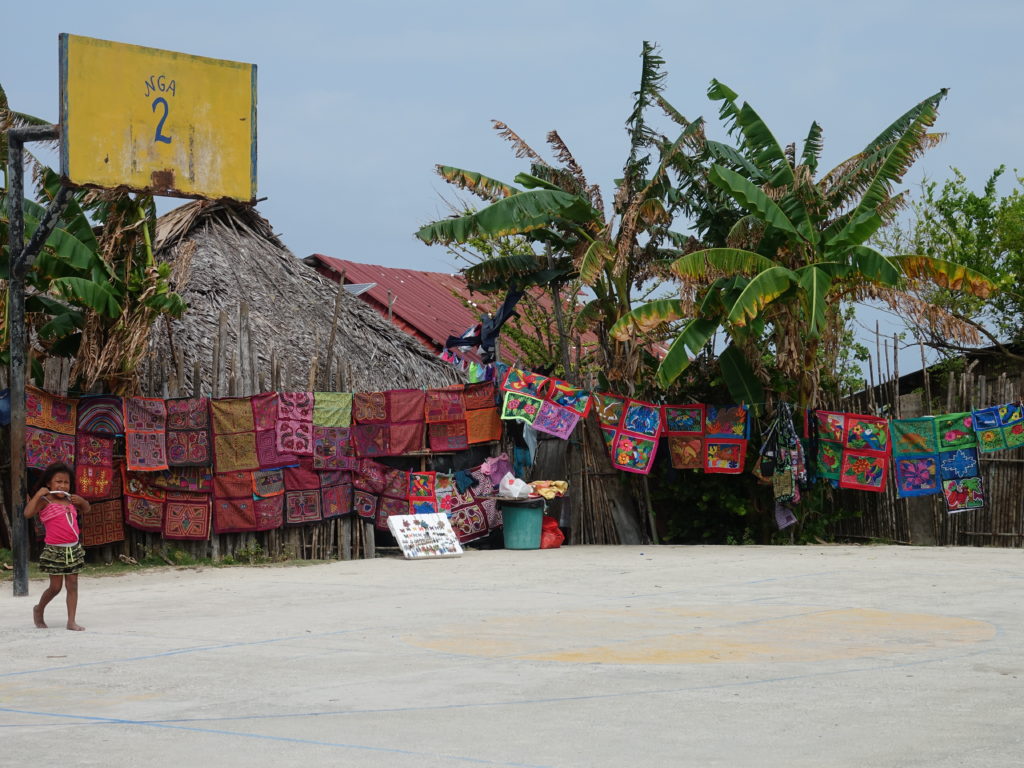 Mola’s for sale in the village. Mola’s are colorful, hand embroidered pieces of cloth that the Guna women wear around their middle 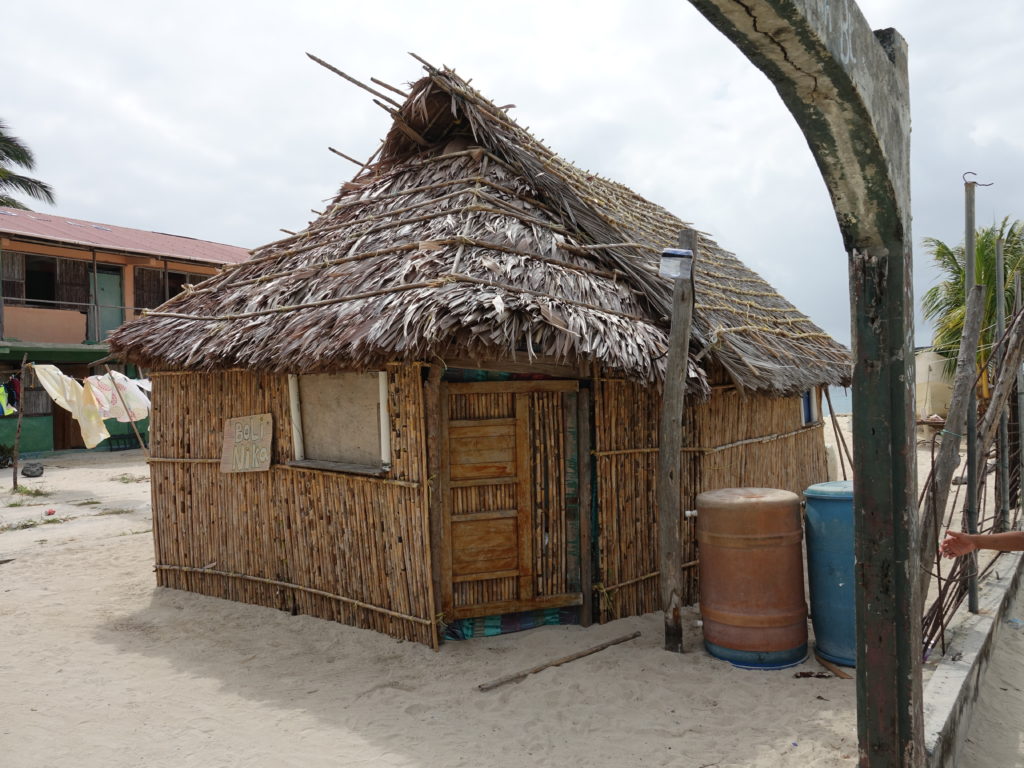 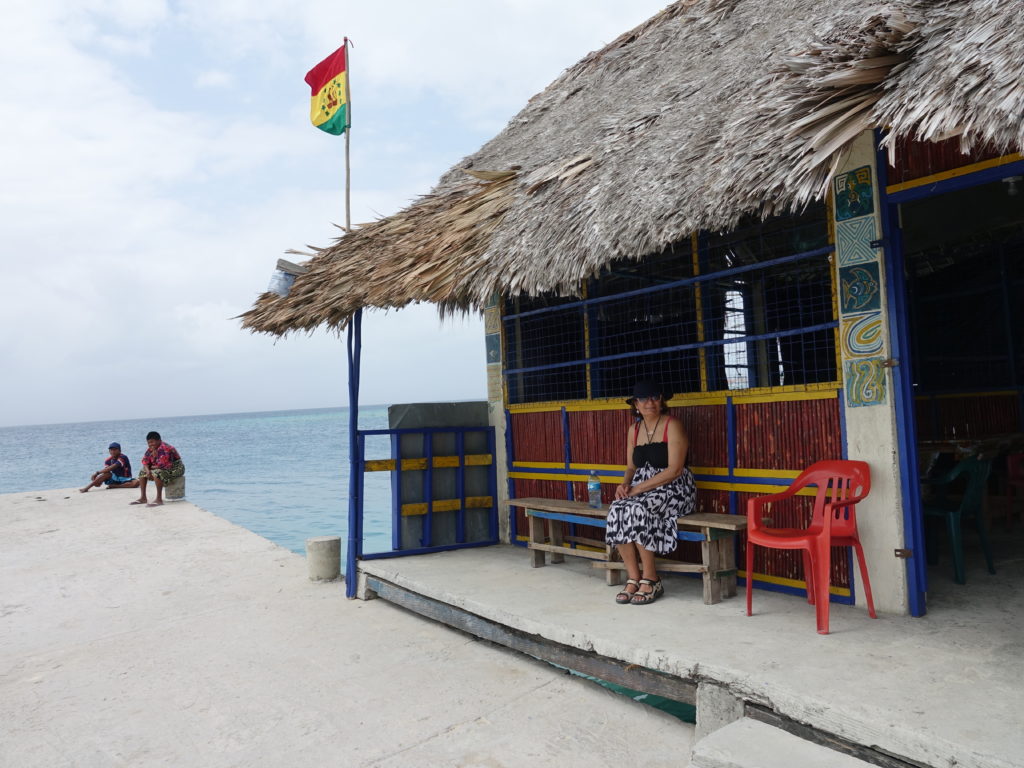 waiting for our Lancha at our “hotel”

Once again, the ride was choppy and we got soaked again. However, after 20 mins, we arrived at some very nice Robinson Crusoe type islands; that you read about and see pictures of. 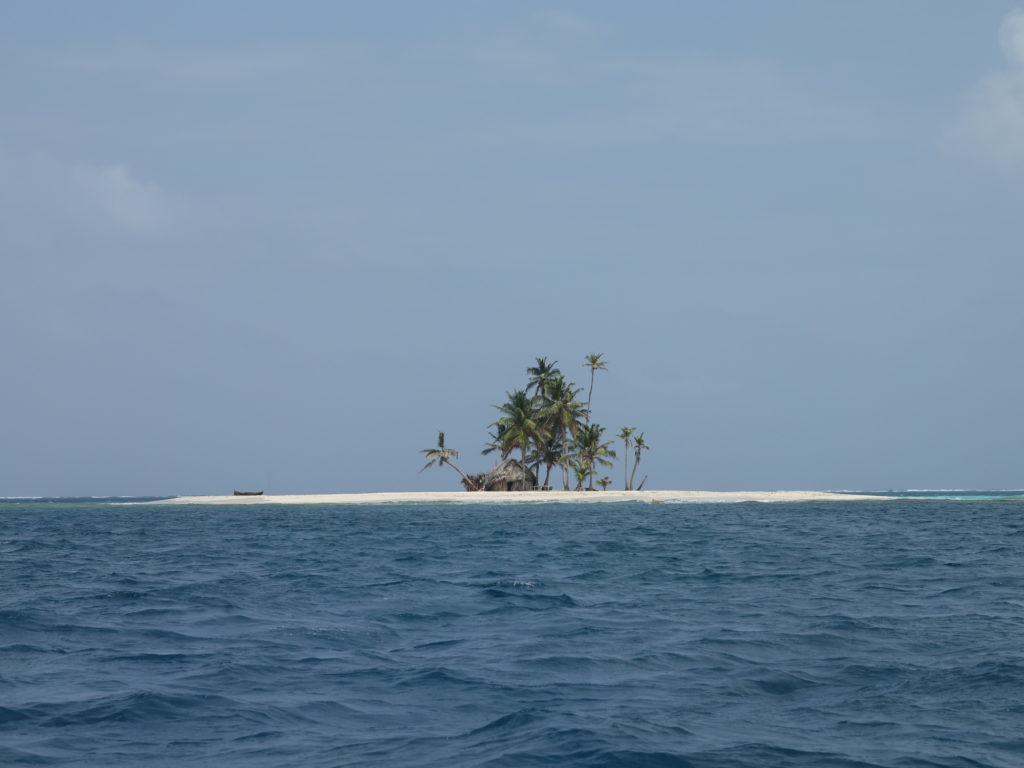 Small island, one hut, dugout canoe, coconut trees, and lots of sandy beach, clear turquoise and blue warm waters of the Caribbean. What more can one ask for? 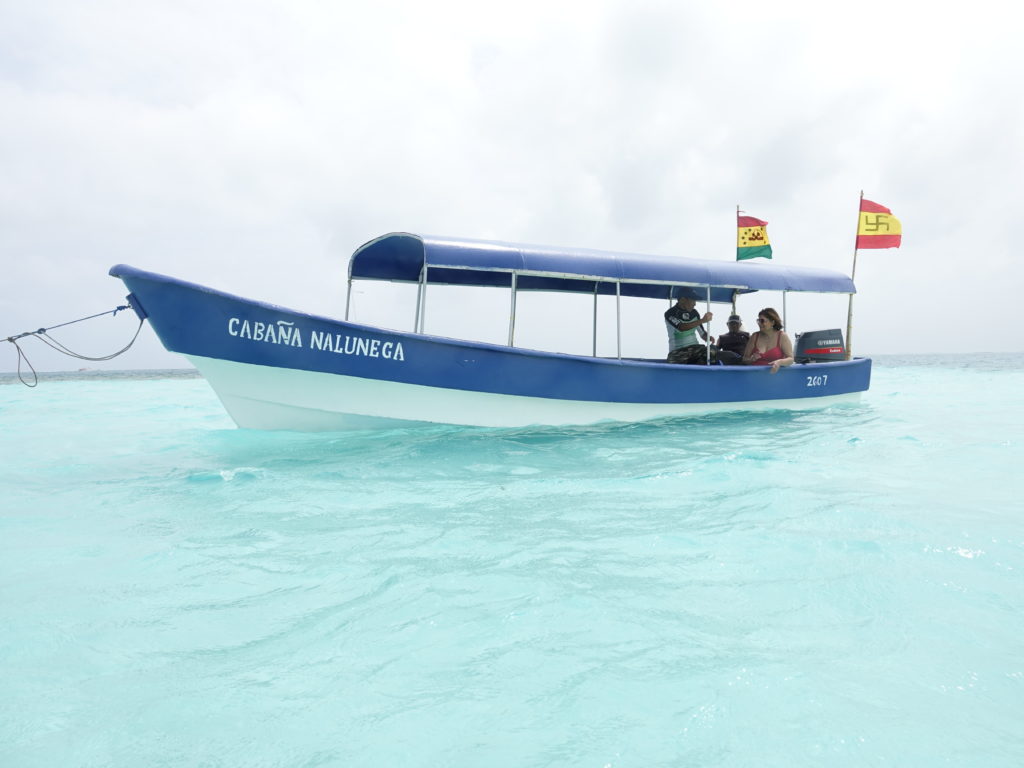 Natural turquoise pool, with sandy bottom, near one of the islands 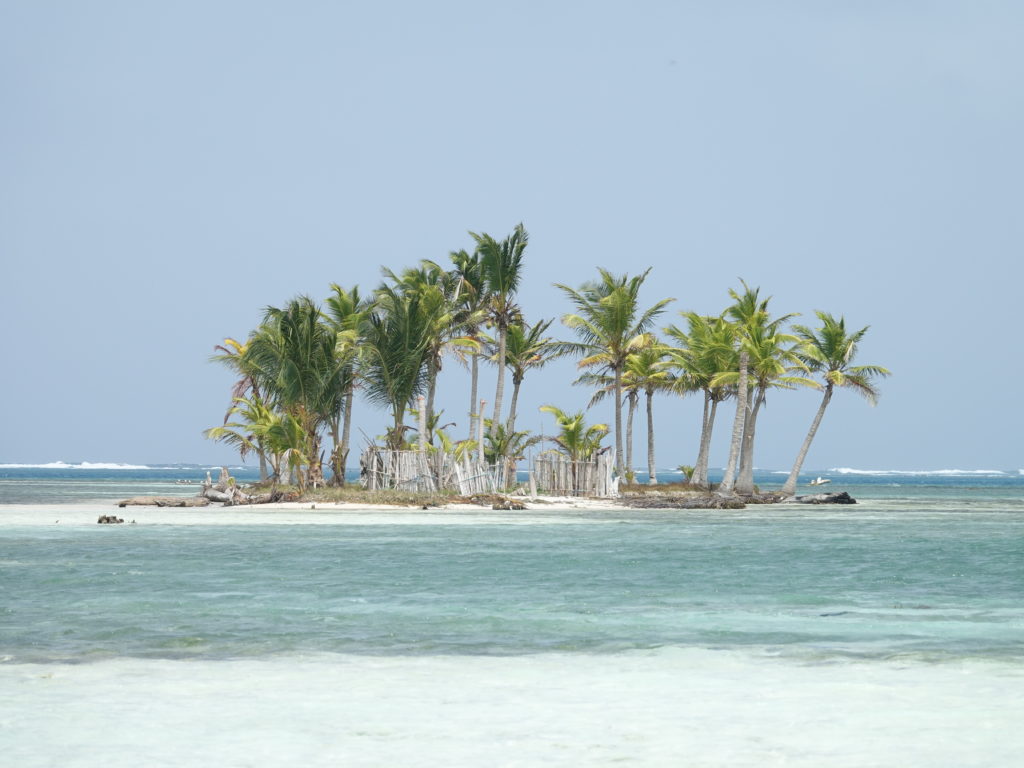 Island view from another island 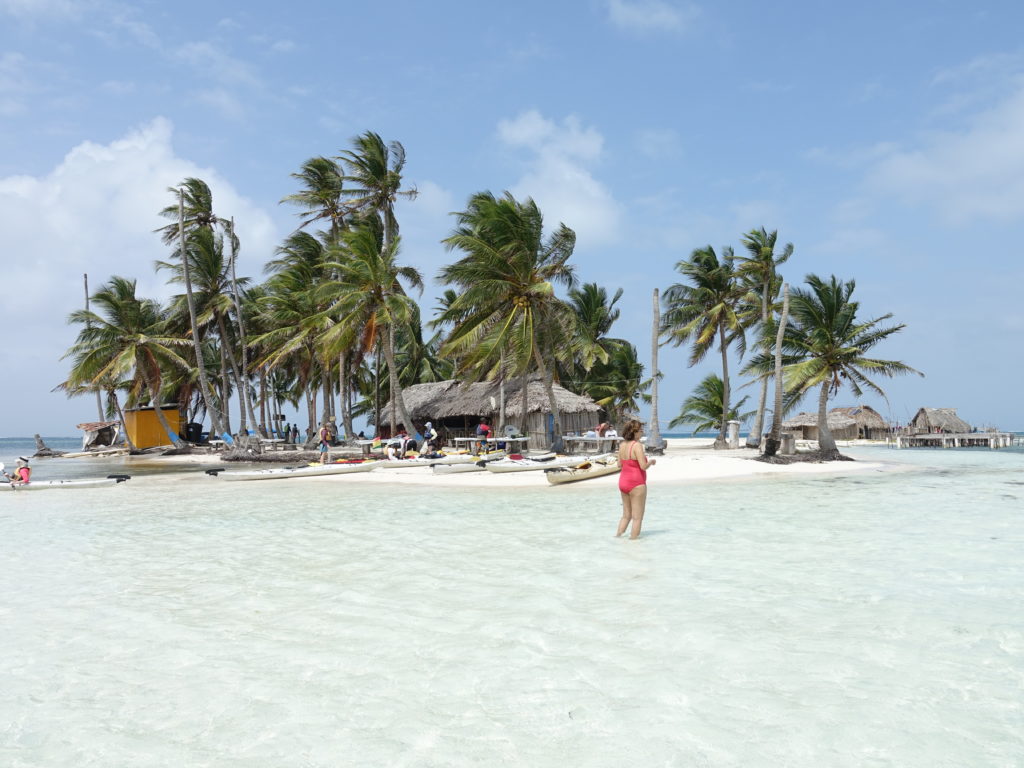 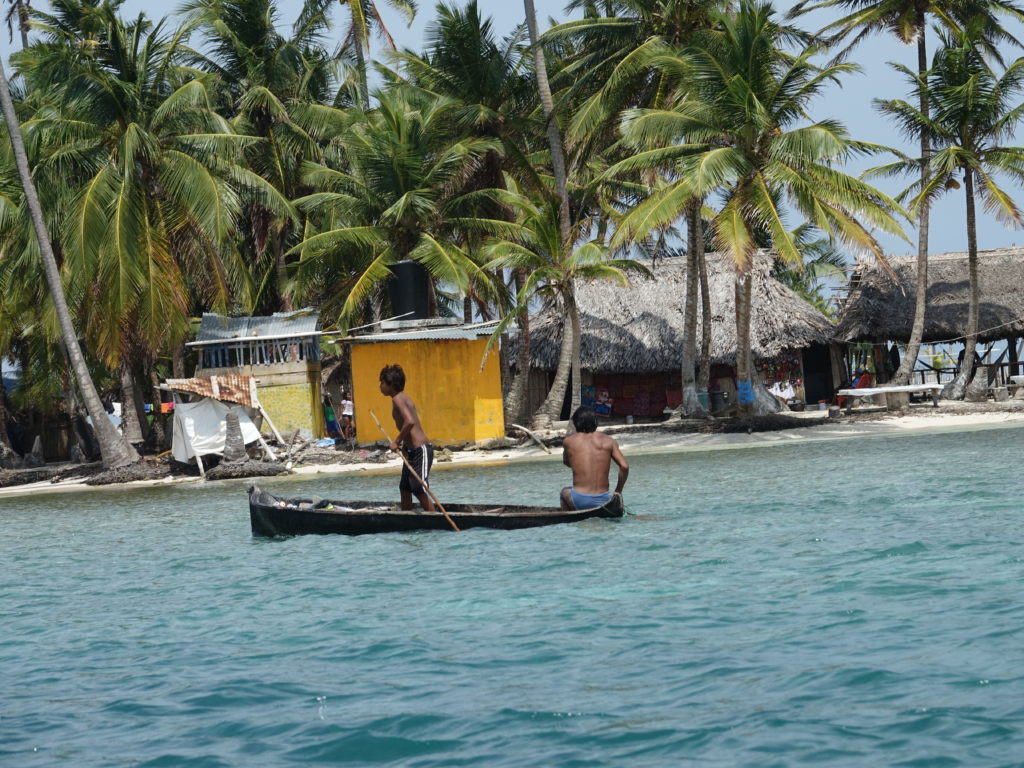 Father & son out fishing in their dugout canoe 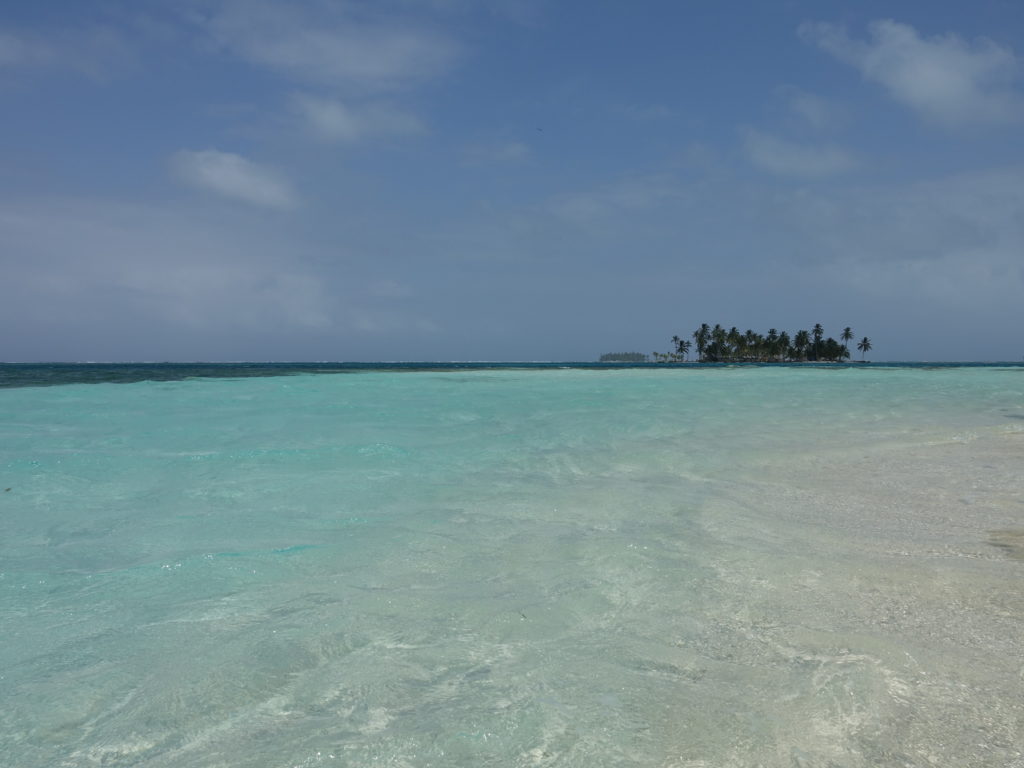 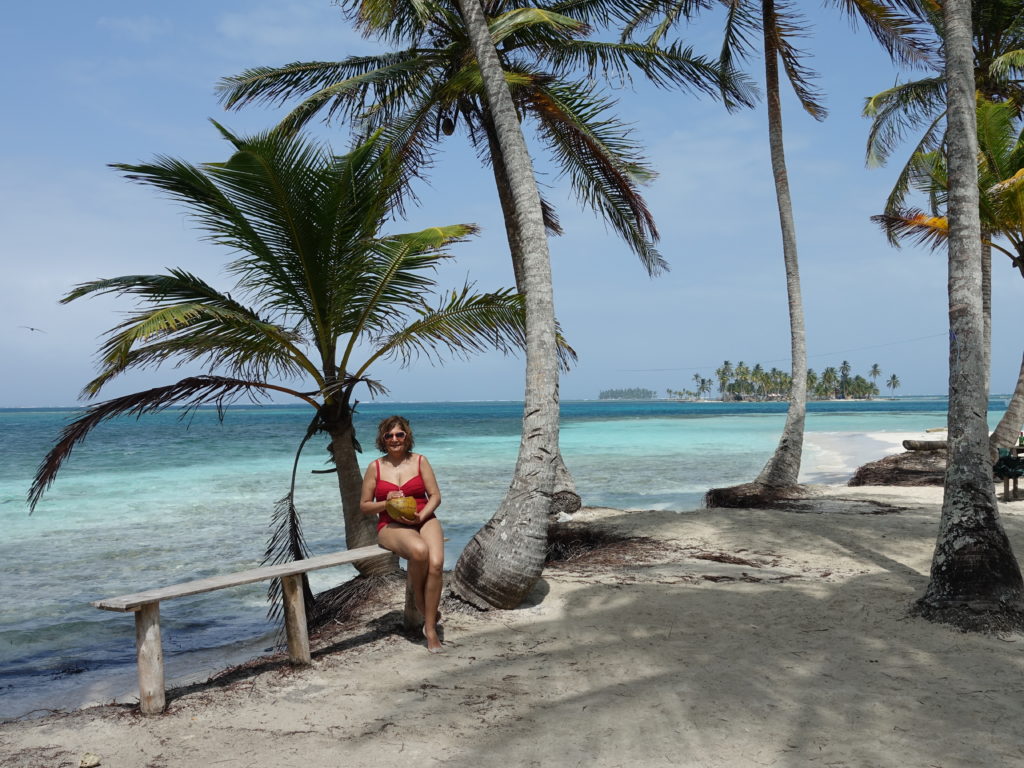 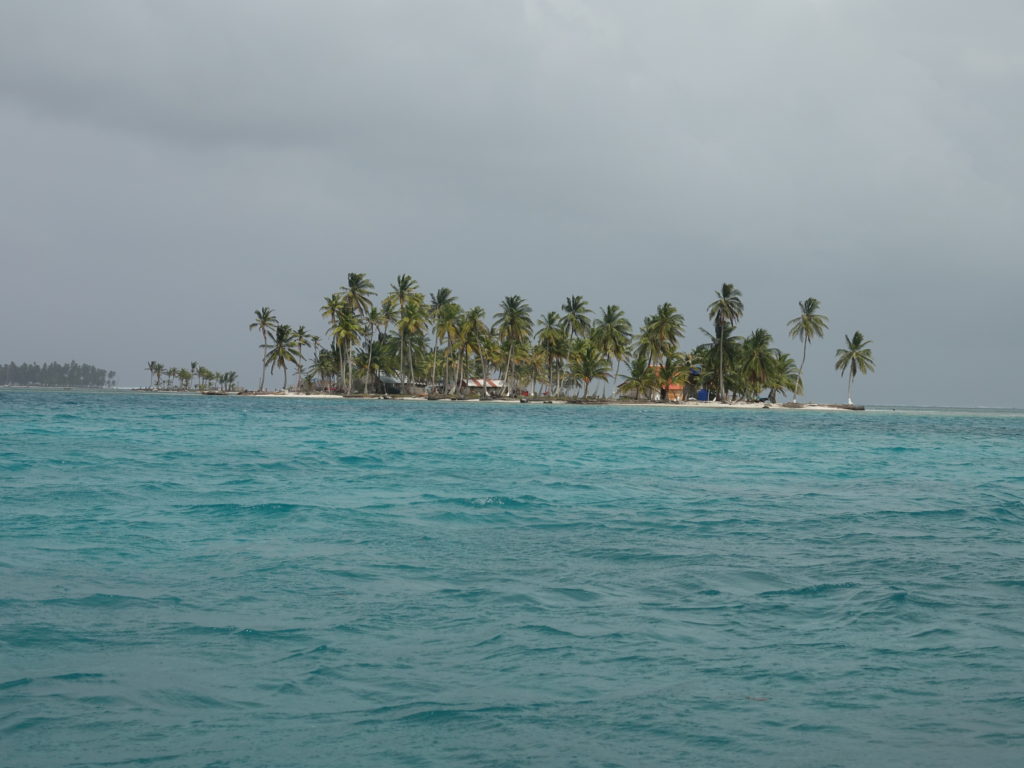 Then headed back to Nalunega, where we were served a huge fish lunch; include fish steaks, rice and salad. It was too much and we could not finish. We then walked around Nalunega again; and we were informed that there was a gathering of all the chiefs from the neighboring islands, and this was a special occasion for them that only comes every few years.

The priests conduct prayers, call on the one god for blessings etc, and they use this time to provide advice to the young people to stick to their traditions and culture. These gatherings are held in their larger communal hut; and foreigners are not allowed inside (due to fear of “tainting” their ceremonies), but can view them and listen to them from the outside. We heard a lot of chanting, and speeches/lectures.

Took some more pictures. Lots of the children were only wearing underwear, and the toddlers were generally naked. The children were playing and entertaining themselves, without their parents “overbearing” them; but the whole village would look after the kids as needed. 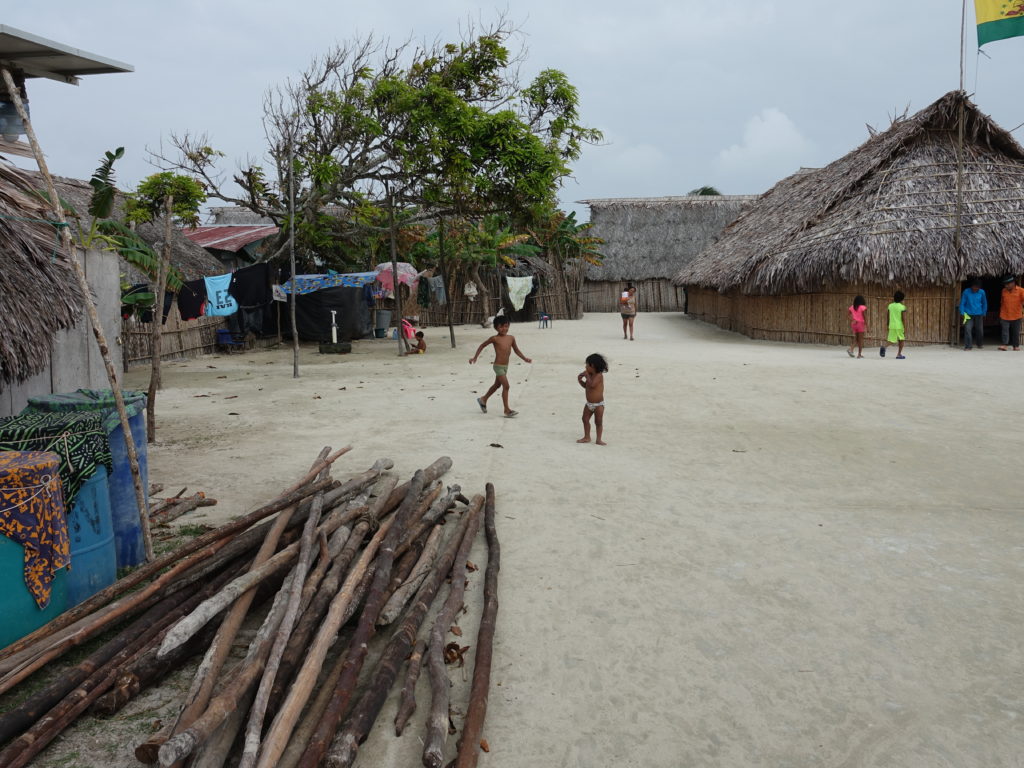 Communal hut to the right; where the special prayers and ceremonies were ongoing 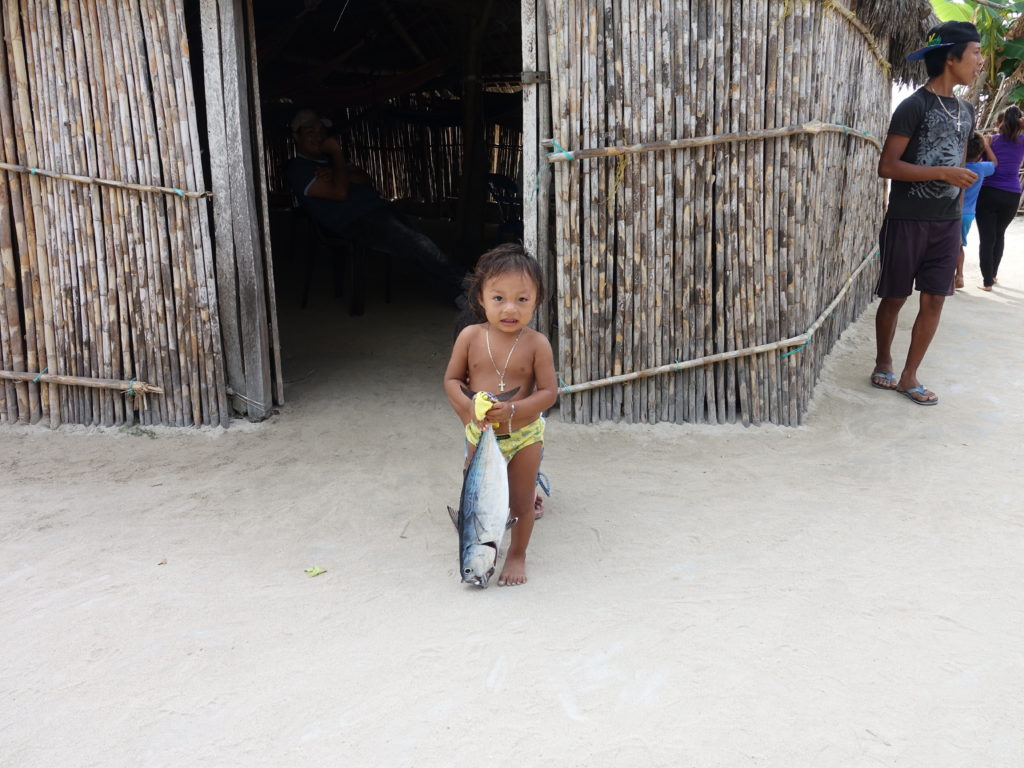 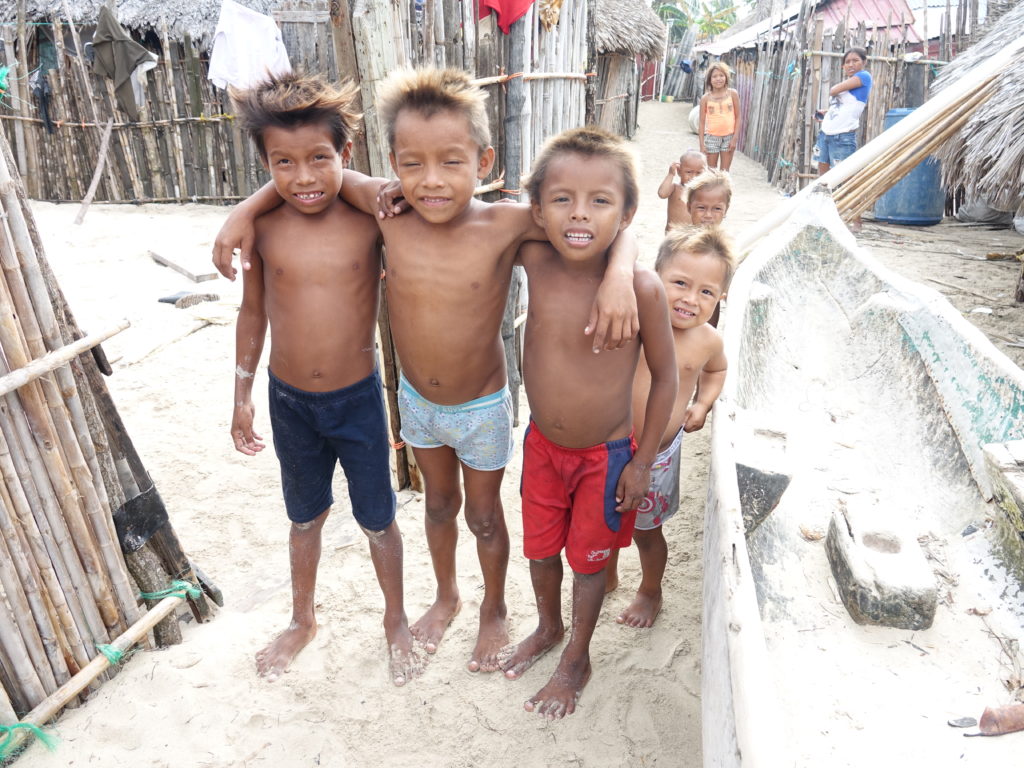 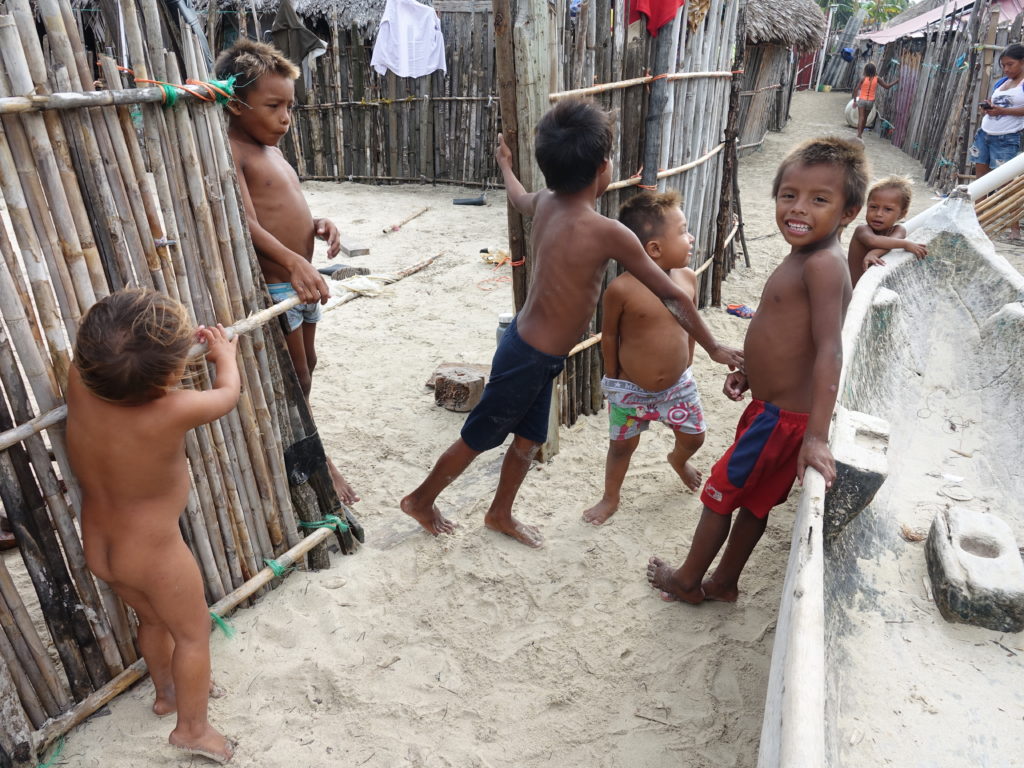 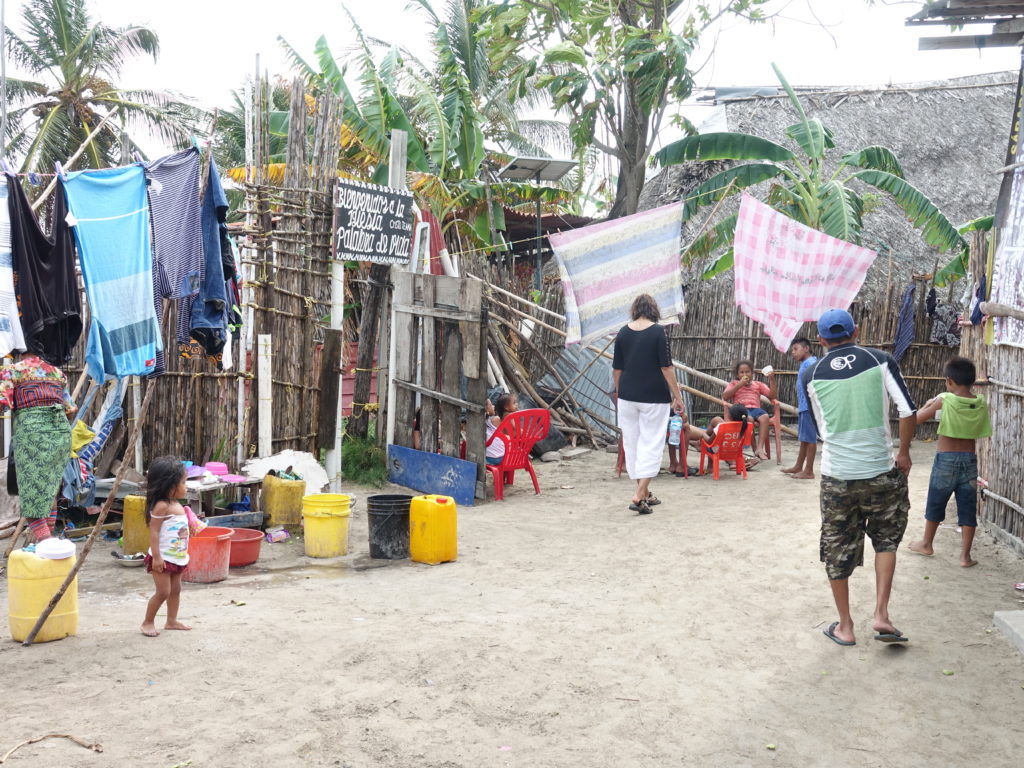 Outside the community hut, there was another hut where a feast was being prepared for the next day, for the whole village to celebrate the gathering of the chiefs. There were several very big parrot fish that were being chopped up into pieces, and then getting bar-b-que’d inside another communal kitchen hut. There was also a large stash of yucca and plantain waiting to be processed. Plan was for a hearty soup 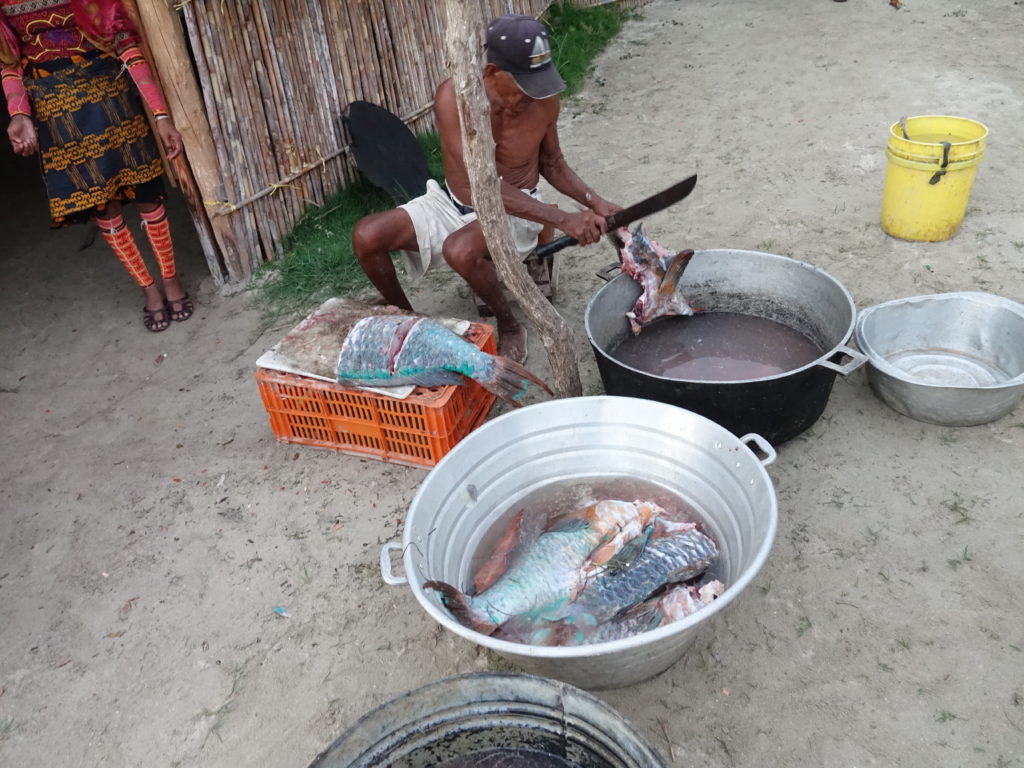 After all this walking around, we went back to our hut, and asked for a shower. The man went off to turn on the shower; which turned out to be a very slow trickle of slightly salty water. No such thing as hot water. After the showers, we relaxed until it was time for dinner. We were served a delicious and large dinner of 3 lobsters expertly prepared, fries, salad and boiled yucca. This was so good, we polished it all off. Very pleasant experience so far. 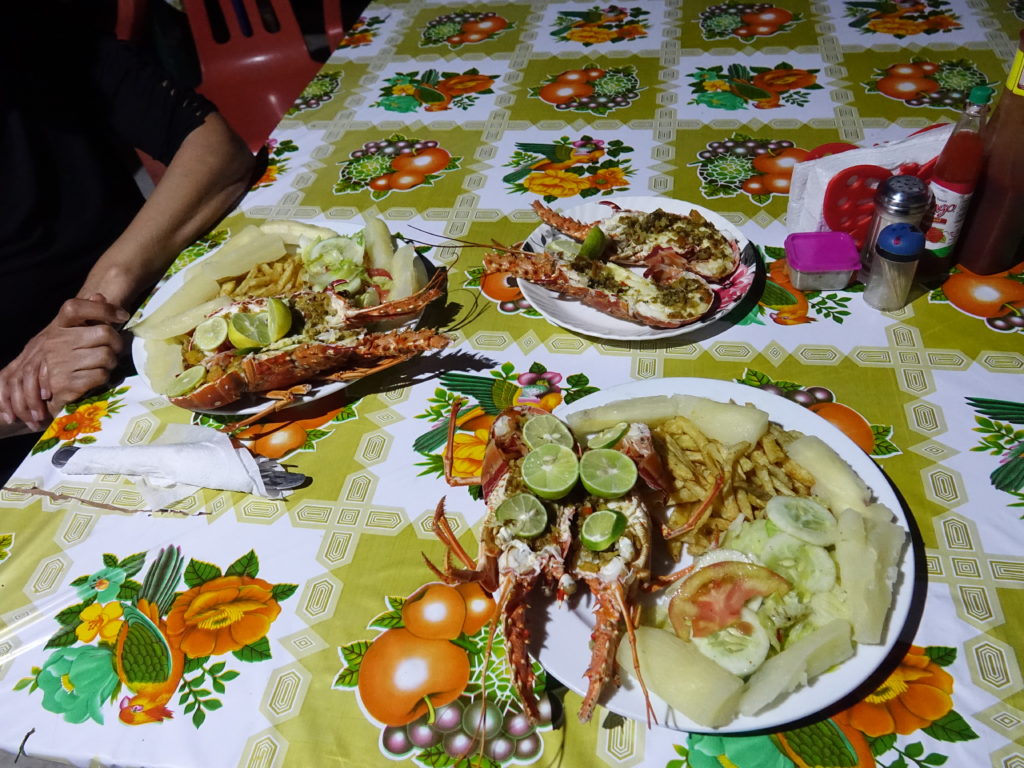 We were served a delicious and large dinner of 3 lobsters expertly prepared, fries, salad and boiled yucca. This was so good, we polished it all off.

By this time, it was getting dark, and we were pleasantly surprised to find that they did have lights; apparently, they had solar panels supplied under a (Panama) Govt program, that charged up 12V marine batteries during the day, and then used the stored charge to provide light with LED bulbs. Everything was 12V DC, so no 110V

After dinner, the proprietor locked up his shop/restaurant at 9PM, and since there was nothing to do on Nalunega, we hit the sack.

More islands tomorrow, and then back to reality

The water was so incredibly clear.